Animals I Have Considered Stealing: Number One - The People Sheep 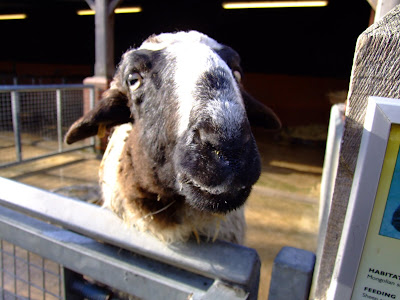 BRIEF CV: When you think of the word “sheep”, what you don’t normally think of are phrases such as “born raconteur”, “erudite zest for life” and “Alain de Botton”. But The People Sheep is like no other sheep before him – not even that weird one that Gene Wilder takes to bed with him in Everything You Always Wanted To Know About Sex But Were Too Afraid To Ask. He lives at the zoo about six miles from my house, in an enclosure between a pen housing some uniquely spoilt pygmy goats and a pot-bellied pig that, from what I can work out from my extensive research, has been asleep in exactly the same position since June, 2003. In contrast to these neighbours, with their world-owes-us-a-living demeanours, The People Sheep stares out at his visitors with eager, bright intelligence, his hooves up on the fence as they pass. But do they pay attention? Do they feel the electric rays of his good nature? No; of course they don’t. They are too busy looking forward to visiting some meerkats, about forty yards away.

I put to those visitors this question: What’s so great about meerkats? What do they really give the world, apart from the art of sitting their on their hindlegs, looking sour, as if having smelled a distant, foul odour that they pretend offends them, but they secretly quite like? If that’s the kind of thing that floats your boat, don’t need to go all the way to a zoo – you can just stay in and watch reruns of Fiona Phillips presenting GMTV. Does a meerkat radiate such professorial wit and charm that, when you leave him, you are convinced that he was wearing glasses, chewing on a pipe, and quoting from the early casuals of SJ Perelman? No. I realise that one way of looking it is “Who wants to see a sheep in a zoo?”. But I prefer to take a different standpoint: the standpoint of, “If a sheep has made it into a zoo, that sheep must be a unique specimen – a veritable hero among sheep.”

PROS: Great dinner parties. Effortlessly neat lawn. Winning, showboating comeback for those frequent “But sheep don’t actually really do anything, do they?” debates.

CONS: I actually quite like mowing the lawn.
Posted by Unknown at 01:40

Congratulations on your blog - I got here after I read your article on moving house with cats from "The Independent".

Have you seen this on the internet?

It's a cat (from Russia, I believe) trying to catch a pidgeon.

I'm from Brazil and I LOVE cats.

They do SO do things! That's why there are so many of them. And, uh, you can always make rugs from their extra wool. I could probably get you a deal on a good loom.

I love Sheep, they have mystic ways.
I'm alswo quite fond of Goats who have a bad reputation courtesy of their eyes, poor things.

Have been a bit of a lurker on this site but decided to comment today now that the cat let me finish reading your book! Also foloowing you on twitter. Oh dear, that makes me sound stalker-esque. I'm not, honest!

Thanks folks! And don't worry, Alex: some goat action on the way very shortly.

Sorry for the "pidgeon" above...

I actually agree with the argument that sheep aren't good animals because they don't do anything; they're not exactly sociable, are they? I mean, if you touch them they bite you; they stare with bovine indifference and it's rather unsettling to meet their eyes.

@Alex: mystic ways? They're a monstrosity produced by indiscriminating evolution.

Yay for goats!
This makes me happy.
And looking back, I really shouldn't attempt to type a comment whilst brushing my teeth... many many typos.

See your point, Chris, but I swear The People Sheep is different. Just look into his eyes!

@Chris: That's just rude. Sheep have feelings too.
Besides, have you never stopped to wonder just how it is they manage to chew all day without getting bored?
And I know sheep are on my sude. ON the way to work this morning they blocked the road in front of a boy racer ON PURPOSE! One minute, there were only 2 sheep, next thing you know, the whole flock materialised. If that's not mystic then... well, it is so I don't need to finish that sentiment.

As Tom said, Look in to their eyes!!! And I've never had a sheep bite me.

I have looked into the eyes of the people sheep and I do I do I do feel a little better for it! Thanks Tom, and thanks too to the sheep.