Guest Cat Of The Month For July: Maritza 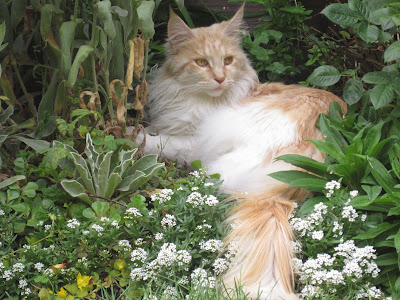 Owners
Carol, Rob and Wallis (I don’t like Wallis much, I don’t know why).

Catchphrase?
Hullo, food? No? Ok, I’ll sleep on the roofs for a bit then if you’re going to be like that. Hmph.

What constitutes a perfect evening for you?
At about 6 I wake up from my afternoon nap on my favourite chair and go out into the garden. I sit there for a while, roll around in the dust, play with the rabbits and Bella (my older half sister). Then I have a wash. Having the wash usually takes me about half an hour .
After my wash I go up onto the flat roof and sit there for a bit, just watching the humans (clumsy things they are, but you’ve gotta love em). Once I get bored of the flat roof I go up onto the big roof with the chimney pots. Here I sit on top of the chimney pots and get covered in soot ( I like soot, it makes me look like a different cat).
The next bit is my favourite bit, it’s TREAT TIME, at 9 the humans bang a can of food and we go inside to have it. It’s really yummy. After my treat I play with Bella and sleep.

Defining moment of your life?
When the humans came back from holiday and I was angry at them for leaving us I walked along the rooftops for 6 houses and wouldn’t come down for hours. They almost called the fire brigade.

Any Enemies?
The tabby from the bottom of the road, it was mean to me and Bella when we were kittens. Oh, and Freddie the rabbit- he hits me with his little rabbit paws.

If you could do one thing to make the world a better place for felines, what would it be?
Cat Government- MORE TREATS FOR ALL CATS.

If you could meet a celebrity who would it be and why?
Florence Welch, we’re both ginger and I was brought up listening to her music.

Which one of the cats in Under The Paw would you like to be stuck in a lift with?
The Bear. I heard his name on the radio once. That is the only reason.

Biography
I was born in Windsor at my breeder’s house on the 6th Janurary 2009. I am a pedigree Maine Coon. My mother was called Kagoza Enya (normally she is called Lupetta) and my father was called Noracoon Little Britten (normally called Alessio). I was the only one left of my litter and no one wanted me because I was a girl, but then my humans bought me. As a very small kitten I used to make my brothers play by running into them (they didn’t like it much but they played anyway).
At 12 weeks I was taken to a much bigger home in London to live with Carol, Rob, Wallis , Bella and the rabbits. When I first got to my new home Bella (who I had lived with for half of my life) absolutely hated me. One day when the humans came home they found that I no longer had whiskers- I just had stubble! They think it’s because Bella hated me so much she chopped my whiskers off (it is).
I loved my house when I came, but I couldn’t walk across the kitchen floor , it was tiled you see and my fluffy, rather big paws couldn’t manage it so the had to put a rug down for me. A couple of months after I came there was building work in the kitchen so me and Bella had to live in the loft. By this time Bella had warmed to me and we did everything together (we still do most of the time.. Except when I go on the roof, Bell can’t manage that because she’s too big!)
After the building work we were allowed to go outside properly, not just look out the windows! I loved it, for months I chased this one squirrel, never caught it (the humans say it was because I hid in the middle of the lawn instead of in the bushes) but it was still fun.
I still haven’t caught anything except flies, do you count flies? I don’t. Now I spend my time sleeping and on the roof. There was a phase where a tabby was mean to me and Bell but we don’t like to talk about it. 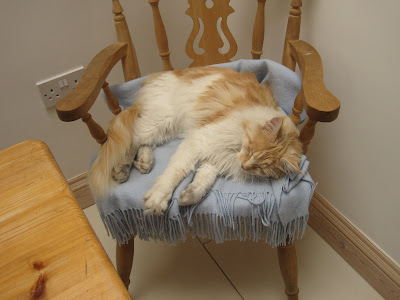 The standards of entries for this year's Most Witless-Looking Cat competition were higher than ever. I doubt I'd have managed a decision alone without getting a headache from the sheer brilliance of the photos, so many thanks to my fellow judges Laura, Pat, Jo, Katia and Linz for their help. So many came so close, but the three moronic moggers below - in no particular order - have been decreed the most supremely idiotic. Each will win a signed copy of Under The Paw... 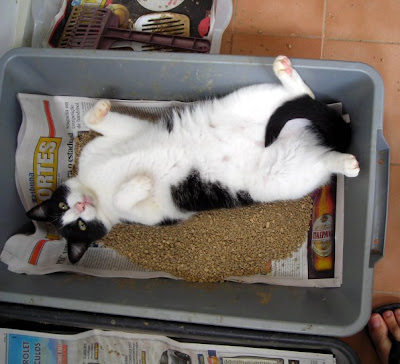 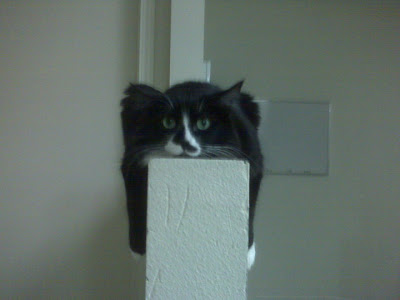 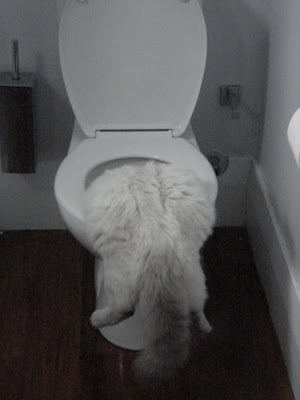 And a special mention goes to Minchie from Peggy (although the witlessness was just that bit forced to be in the running for a prize): 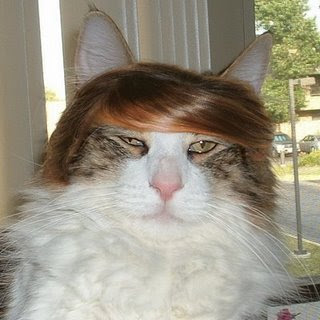 Those who weren't successful can read more about witless - and not-so witless cats - in Under The Paw and (published in January, but available to pre-order now!) Talk To The Tail. 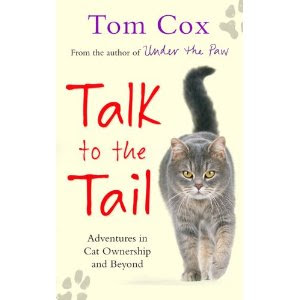 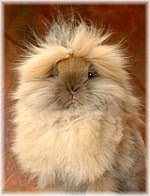 Also good for a fluffy pick-me-up: The Daily Bunny
Posted by Unknown at 01:55 4 comments: