I've Said It Before And I'll Say It Again: Cats Are Cooler Than Kittens. However, This Is Sort Of Cool 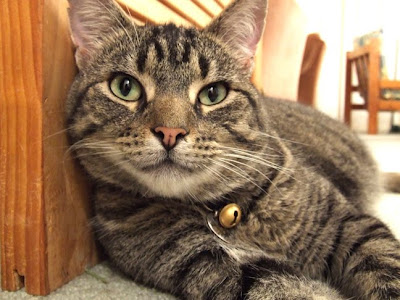 Owner?
I own one hyooman, that is my mum, Liz.

Catchphrase?
‘Not conceited, I’m as good as I say I am’
‘It’s Squeaky, b*tch’

Favourite habits?
I like to eat the Foods. I also like to help my mum with things like Computing on the Computer (spreadsheets) and businesses in the Kitchen (helping in the Kitchen is good because sometimes I get Cheese and that is a Treat for being so helpful).
Because I am so important I have to spend a lot of time keeping myself in top condition. This includes Doing Scratches on things like couches and walls to keep my claws sharp. (Mum then has to sand and fill and paint the walls to get a ‘bond’ back, but that’s ok because I help with this too. And maybe get Cheese).
ReowReowReowing at my mum and other hyoomans. I like to do this especially in the middle of the night, to see if they are paying the correct amount of attention to me. Or if they may like to give me some Foods, for being so good.
I am an expert on Packet Opening and have a finely honed skill for hearing Packets and Cans being opened within a 5km radius.

Favourite food?
TUNA!! And Party Mixes!! And Eukanuba! Also - I want whatever you’re eating, including (but not limited to) pizza, burritos, 2 minute noodles, toast, mushrooms, cheese, yoghurt, curry, Portuguese chicken, hot dogs, etc. Once I tried to steal hot chips off a seven year old child, and also once I stole a chicken wing from the bin, ate it, and hid the bone in a handbag. I get away with these things because I am so Clever.

Defining moment of your life?
When I decided to not be homeless and go live at my mum’s flat. This was good because then I was allowed inside the house, and I could sleep in a king size bed (I even let mum sleep in it too), and have a best friend who is a hyooman. Also I could have all these Foods and could just do whatever I wanted. Mum says I’m the best cat in the world, I think this is true.

Any enemies?
I do not like dogs. A dog came to my house and I hit him in the face. I also do not like dvds about Lions, because the roaring upsets me. I hate aerosol cans.

If you could do one thing to make the world a better place for felines, what would it be?
I would make Tuna into land animals. (Tuna are obviously quite small because they fit in a small can. I think I would catch a lot of Tuna if they were on land.)

If you could meet a celebrity who would it be and why?
I am quite important, so if I was another cat or hyooman I would probably just want to meet myself. Maybe if there was a solid gold statue of me, I would meet that.

Which one of the cats in Under The Paw would you like to be stuck in a lift with?
Pablo, because he is quite Good-Looking like me and would make a good Wing Cat.

Brief biography?
About 3 and a half years ago I was homeless, I was living in the bush because some people had moved house and left me behind. I was just about to go to the SPCA then I decided not to go there, and to live with my mum instead. She didn’t know what my name was then, but she worked out it was Squeaky because of all the ReowReowReowing. Since then I have become very Large and Important, and I now manage a staff of four hyoomans (including mum, who is my best friend), and one other cat (my brother Andy). 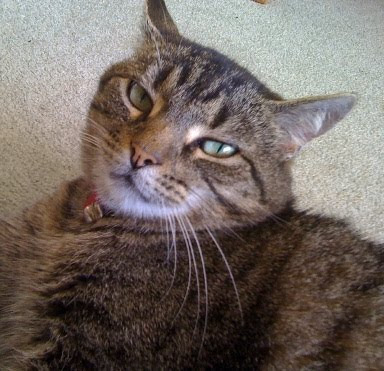 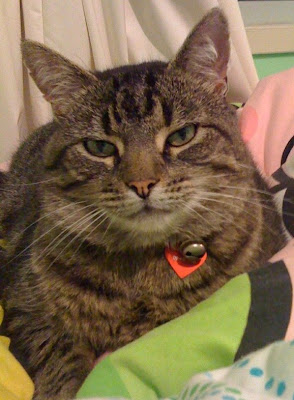 This Pretty Much Explains Everything

My friend Al has no love of cats, but, for some reason, seems to be sending me more feline links than ever recently. I think this perhaps proves my theory that most people who reckon they're indifferent to cats are just "pretending" and are actually quite fascinated with them. This is probably my favourite of the links he sent
Posted by Unknown at 04:37 5 comments:

These Are The Best Chickens I Have Ever Seen 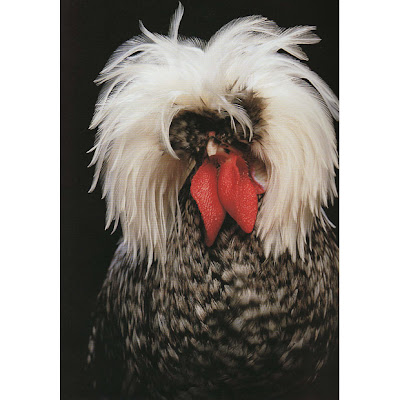 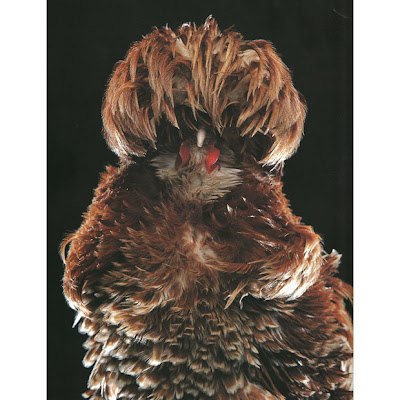 I defy anyone to find better pictures of poultry than these from The Telegraph.
Posted by Unknown at 09:21 6 comments:

Single Life With Cats: A Blog (well, two, in a way) 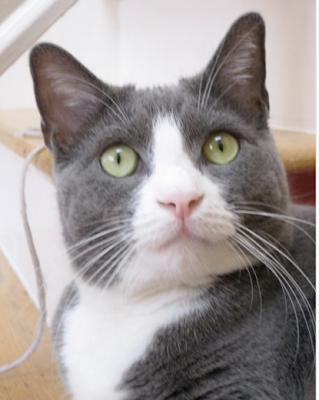 What is it that makes some men scared of cats?
I wrote a bit about this here. It's also a question Tamar Arslanian (that's one of her moggers pictured above) asks in her new blog, I Have Cat, which is all about being a single New York girl with cats, and the preconceptions that go with it. As I mentioned a few blog posts ago, I'm single these days, and I do worry a bit about the way the outside world might perceive a man living alone with four cats. But the popular line of thinking seems to be that the situation is far worse for women. I've had a few conversations with female friends recently who are single and either haven't got a cat, or have resisted getting more cats, purely because they are worried about being "that cat woman".

Tamara has also written about cat-loving men in one of of latest posts. She calls them "secure with their sexuality", "evolved", "confident" and "patient and accepting". Obviously I'm not at all qualified to comment on that, and I also know that I have many dog man friends who have some of these qualities, but what do you think? Does being a cat lover really say anything about a man's personality? Or does it just mean that they love cats?
Posted by Unknown at 08:26 10 comments:

Labels: cats and men, i have cat, under the paw

Pablo And Bootsy In Their New Place

I took some shots of Pablo and Bootsy at Dee's place the other day. It looks sweet and innocent, but this sort of thing invariably ends with one of Pablo's infamous dry humping sessions. 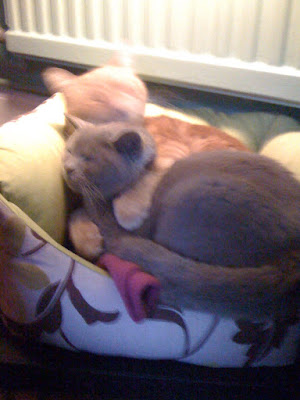 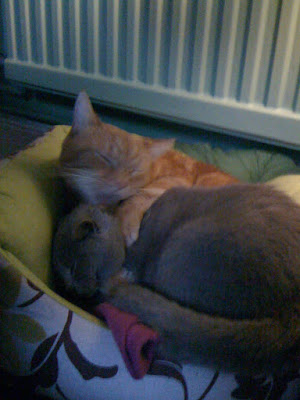 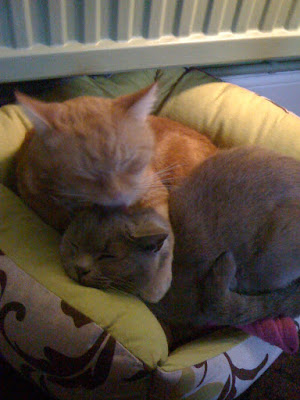 Labels: cats cuddling, under the paw 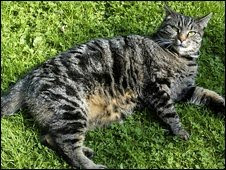 My best friend at primary school used to have a cat called Thatcher. It was very cuddly and docile, just like this one presumably used to be, although it at least follow its namesake's example by frequently snatching milk.
Posted by Unknown at 08:45 3 comments:

Under The Paw: Out In Canada this week! 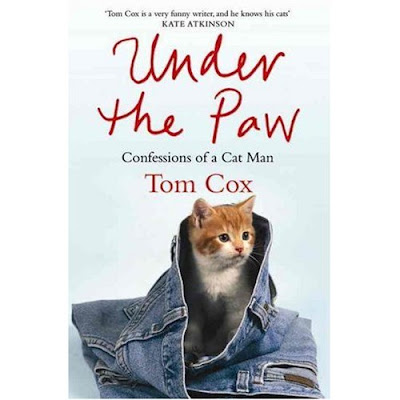 Just to let Canadian readers of this blog know. You can buy it HERE from Amazon Canada. Still no news on an American publication of the book - though we're getting closer! - so this might also be the easiest way for US blog followers to purchase.
Posted by Unknown at 08:40 7 comments:

I Can't Has Telesales

My friend Jackie Morris - with whom I went feline-walking earlier this year - always takes the best cat photos in the world, but I think she might have surpassed herself with this one of her ginger clan... 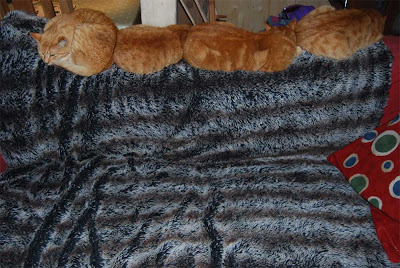 A Terrifying Halloween Cat I Spotted Outside Greengrocers In Norwich 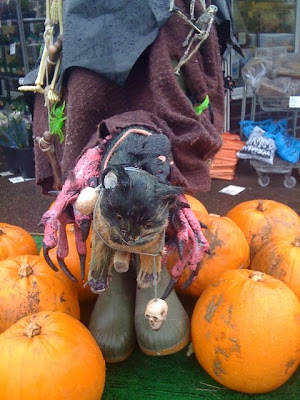