It wasn't my intention to advertise on this blog, but this stuff is magic. It might even have altered my lifelong scepticism towards "gourmet" cat foods (you know - the ones with the adverts with women in expensive silk dressing gowns). The man who initially tried to sell it me started eating it himself to prove how good it was and while Dee and I haven't gone that far yet, we've ordered a job lot of it for The Bear, and it seems to be contributing to his reconditioning (the chunk of fur that had disappeared from his flank before Christmas has regrown).

He's been wolfing it down on the kitchen work-surface, whilst taking imperious glances down to the more inferior members of his species chowing down on their Felix salmon sachets, then going for a big sleep in his "Certified Reconditioned" computer box. Obviously Dee and I do sometimes give my other five cats some Applaws as well, since we wouldn't want to practice too much favouritism, but we can't help feeling that The Bear somehow deserves it more because of his tougher life. Either that, or he's really got us trained with that new big-eyed look of his - the one where he just seems to give a tiny nod in the direction of the top of the fridge, where the Applaws is kept. He hasn't seemed to enjoy his food this much since the legendary day in 2001 when he ate a pop tart followed by some broccoli. 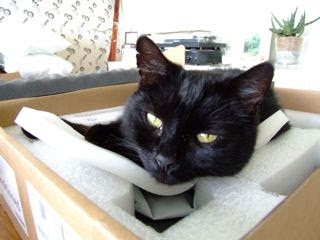 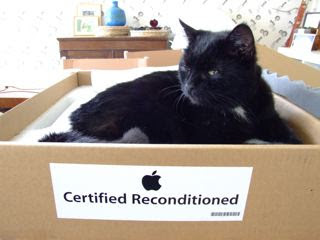