Fake Tans: How To Tell Them From The Real Thing 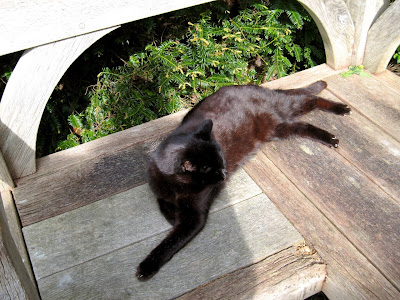 On their recent holiday, my parents took the above and below photos of a black cat they came across. I find that, with them, things like this happen more and more often: they say they're not massively fussed about cats these days, but it's really just a front they put on in the crooked belief that it will be a deciding factor in pulling me back from the brink of getting even more cats than I already have. In reality, they're always off on some adventure, and returning from it with photos like the two here. They call these adventures "walks" but from what I can work out they're essentially moggy-finding missions in disguise. Huge, previously untamable whiskery beasts will just mysteriously "appear" and clamber on top of my dad's back as he sleeps on a remote Derbyshire hillside. My mum will walk down a green lane and suddenly find a needy tabby at her heel. Personally, I don't know why the pair of them don't stop skirting the issue and just go ahead and get another cat to finally replace The Slink, but I suppose they're happy in their denial, and that's the important thing.

Anyway, my mum was telling me about how nice this cat was. "And of course it had that tan that some cats have," she added.

"What do you mean?" I asked

"You know, that cat tan. You can see it there - the ginger bits on the black."

"But surely that's just a black cat with a few bits of ginger on its fur."

"No, no. That's tan. It's obviously very keen on lounging in the sun, and that's why it's got it."

"Oh, you can just tell. It obviously didn't have that colour in its fur originally."

I've done some research on this, and while it's led me to find a few cat forums where people are talking about buying special suntan lotion for cats, they seem to be referring to be stuff to put on their cat's skin, and not their fur. Then again, as my mum pointed out as our discussion continued, human hair changes colour with lots of exposure to the sun. But Shipley spends a huge amount of time basking outdoors in hot weather, and the only difference between his black fur now and his black fur when Dee and I first got him eight and a half years ago is that it is flecked with a few more streaks of grey.

I'm not entirely convinced by my mum's theory, but I'd be interested to hear anyone else's experience of cat tanning. If it is a genuine, common phenomenon, it might also explain exactly why Ralph starts to get so sensitive at this time of the year and invariably heads off to hide in one of his favourite bits of foliage. Maybe he doesn't have a special summer version of Seasonal Affective Disorder after all. I mean, I knew he was vain. But could it be that he's also a spiritual goth, and simply keen to keep his immaculate (and, to be quite honest - though I would never tell him this - not remotely goth in the first place) fur from harm? 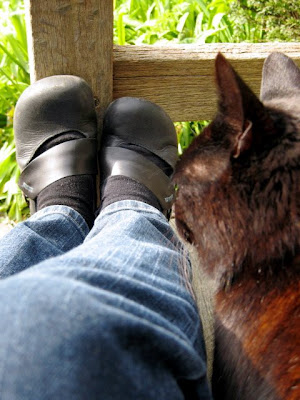 Perhaps the bits of ginger are his undercoat (whether that can change, lighten in sunlight I dont know) and the sun reflecting off it makes it look ginger. I see a similar thing on my cat's fur, which normally is black, when he lounges in bright sunlight.

My mistress, Princess Cleo, who is normally a very fluffy black and white always gets reddish 'highlights' in the summer

My black cat Inky, who is now 15, has gradually become more orange over the years, as well as gaining more grey fur. He spends about 90% of his time sunbathing and we noticed that the process was drastically increased by flea collers - there would be a 'bleached' area around his neck area. Interestingly this hasn't happened with my other black cat, Artois, who is seven, or his black-and-white littermate Stella, although this is probably due to the fact that they spend a significant portion of their days inside, howling at the fridge.

Well, as a black-haired person whose hair turns a distinctly rusty ugly orange after lots of sun-soaking, I concur that yes, hair tans, too. And so does cat fur. There have been several black Siamese cats in my life (the offspring of one Siamese and one black parent) and they all have this feature, year-round. It gets more pronounced with massive rays, too.

Martha Stewart apparently keeps her black horses out of the sun, so they don't fade to red, ( http://tinyurl.com/lzasv8 )
I can't say I ever noticed my black cat, Harry, changing colour though. And he was a total sun slut.

My black smoke Mainecoon, Katinka,is definitely turning ginger on the right side where she lays on the window sill in the sun. Her breeder warned me of this; I relayed it to Katinka who didn't seem to care at all! Jeannette

Kitty probably has a recessive or dominant red gene which will give the rusty look. Some black kitties look blue sometimes, some look rusty. A combination of genetics and melanin. Melanin in the hair shafts takes are microscopic granules, which vary in shape, size, and arrangement, giving a variety of colors.

my friend Helen's chocolate burmese definately gets a cat tan in summer, he goes kind of orangey and looks a bit faded.

Well I found this thread after a search to answer my question, which was "Why do my two black cats have orangy patches of fur"?
I had already considered the sun being the reason and I am so convinced now and will not worry atall. The fur of the cat in the top picture is exactly how our cat looks.

My black cat, Daphne, has definitely developed her ginger "tan" in the past month. She spends a lot of time in the garden sunbathing and I noticed it first last Summer. It does return to black though.