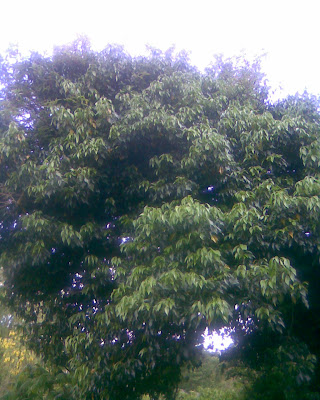 Above this text, you see a picture of some foliage. Looks ordinary enough, doesn't it? Not the kind of thing you'd expect to walk past and feel a portentous, lower back-based chill? Yet, at the time of writing, it hides an aural tormentor of quite masterful malevolence (and I'm not talking about the covers band that tends to play at the social club nextdoor around this time of year). Within this foliage, somewhere, lurks the unseen bird that, over the last few weeks, has been making a mockery of my cats. I'm not sure if it actually is a mockingbird in any official sense, but it ought to be made an honorary one, even if it isn't, such is its skill at messing with the feline mind. Put is this way: if Pablo, The Bear, Janet, Shipley, Ralph and Bootsy were to co-author a book with the same title as a famous Harper Lee novel right now, it would definitely not be about racial tension in the Deep South.

I've had birds in my garden before that mimic the sounds of domestic life. At my parents' house when I was a teenager, there was one that could do a pitch perfect impression of our ringing telephone. A couple of years ago, when another Telephone Bird turned up in my current garden, I was unperturbed. And a few months later, when another bird arrived with a cheep that was an almost exact replica of one of Pablo's two meows, I had to admire its moxy. Pablo tends to fluctuate between a panicked squeak and a throaty Rod Stewart warble. Frankly, I would have been more impressed if this bird had managed to replicate the latter sound, but you had to give it its dues for its plucky cover version of the former. Did Pablo - who, as regular readers of this blog will be aware, is not my brainiest cat - go out into the garden and stare about him, bewildered, thinking, "Help! I am being followed around by me!"? Probably. But no doubt he and his step-siblings are even more confused by the latest in the local series of avian mimics, who likes nothing more than to imitate the exact sound of me whistling my cats to tell them it is dinner time.

The Foodwhistle Bird is more sophisticated than its predecessors. Its taunts are not only designed to bamboozle; they are premeditated to seriously mess up a cat's schedule. I still think my cats can just about distinguish between the sound it makes and the sound I make, but it's becoming a close call, in more ways than one. As the wretched skybeast starts its merry tune, they can often be seen bolting through the cat flap and into the kitchen, an eager look on their faces. I, in turn, can be seen looking at them in a bemused fashion, and saying, "What's your problem, morons? Do I look like I've got a beak?" Even when its efforts are less strident, or they're not feeling particularly hungry, I'll see them open one jaded demonic eye in slumber as it begins its call. I'm also wondering if it might be responsible for Ralph's current agitated yowling. Perhaps this is an explanation for why he spends hours standing outside the bedroom window, shouting his own name in terror ("Reeawwwlph!")? Maybe the Foodwhistle bird has whispered in his ear and threatened to imitate him next. Will this be the one thing that tips my tabby's summertime Seasonal Affective Disorder over into full-blown madness? Right now, it seems dangerously possible.

From my point of view, it's also a bit of a bind, as scheduled slop-dispensing has become more important in the weeks since Janet was diagnosed with hyperthyroidism. But at the same time, I can't say I'm not intrigued. The local birdlife is clearly evolving in leaps and bounds every month in its mimicry skills. "What comes after The Foodwhistle Bird?" I find myself wondering. The Jeremy Paxman Clearing His Throat On University Challenge Bird? The Seinfeld Slap Bass Bird? The Really Hungry Tiger Bird? I can only conclude that, whatever the case, this could be an interesting time to open the windows and revisit my Pavlovian mealtime experiment with The Knack's My Sharona ...
Posted by Unknown at 09:03

There are obnoxious birds here, too. Some of them used to divebomb cats who visited our back garden while cursing them shriekingly. Since none of my clowder venture out, they can enjoy these blue berserkers from the comfort of the windowsill and retreat to their pink, flowery garden-themed boudoir if the little ba$tards get too stroppy.

I dread to think what would happen if there were birds like that near my Mum's house. Fred and Lily are only just going outside and I came across Fred this morning yowling at a crow that we staring disdainfully down at him from next door's roof. At least he has ambition!

A Cat Door or Cat Flap gives you and your cat the freedom they deserve.

I also whistle for my three cats to line up at mealtime. I can't imagine a foodwhistle bird having them on. It would be hilarious.

Thanks for the humor. - Dave