Special EXTRA Guest Cat Of The Month For May: Pepper 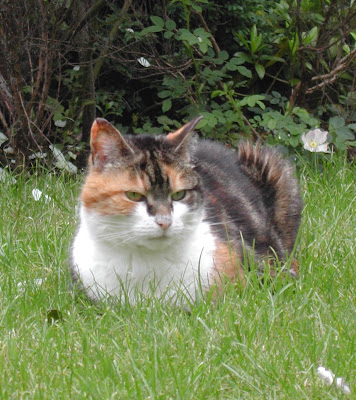 Favourite habits?
Sleeping on laps or the fluffy white cushions or under the duvet, depending on whether or not it’s radiator season

What constitutes a perfect evening for you?
Ignoring the television, sleeping, waking up, checking to see if there are any cats outside, hissing at my own reflection in the window while they shout out, helpfully, “It’s only you!”, then returning to sleep, possibly in a new place after a walk round the perimeter of the rug

Favourite food?
Applaws: tuna and seaweed, chicken and pumpkin; tuna in brine; a nice lick of some butter or cream, although this make my ear sore – I know I shouldn’t but I just can’t help it

Defining moment of your life?
Moving from a flat to a house with a garden when I was one year old. This is when I found my role in life: territorial enthusiast – neighbour’s cats beware! Boundaries are there for a reason, and you will respect my authority!

Any enemies?
Any number of blameless neighbour’s cats. Especially whoever it is who comes in my cat flap. They suspect the black and white tom, but I’m the one who has analysed the forensic evidence which he helpfully leaves all over the kitchen. I have enough to convict the invader

If you could do one thing to make the world a better place for felines, what would it be?
More Applaws flavours, and better stock at Pets At Home

If you could meet a celebrity who would it be and why?
I am the only celebrity round here

Biography
I was born in North London to a lovely ginger mum who shared a house with Emma. There were three girls in the litter, Millie, Chilli and me – although none of us had names when Chilli and me went to South West London to start our new life. (We had an older step-brother called Weezer, named after the American band.) We lived in a first-floor flat for a year where birds only appeared on this big telly, then we moved to the house with a garden, where we could catch them and eat them and everything; then to a house outside the M25 with a bigger garden, although it was too big, and we treated the patio as our garden, occasionally tempted into the wide, open spaces by Andrew or Julie running ahead of us. It was just me when the three of us moved back to South West London, so I started to make a lot more noise to compensate for being the only cat in the house. There was a stupid little boy kitten for a while, but we don’t like to talk about it. 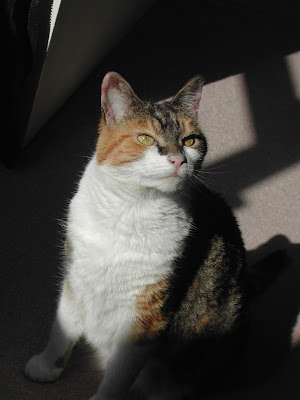 Keep it coming.
Love it.

Gorgeous Pepper. Long may you reign!