Ralph And Pablo: We're Closing The Mutual Loathing Bureau (For An Hour) 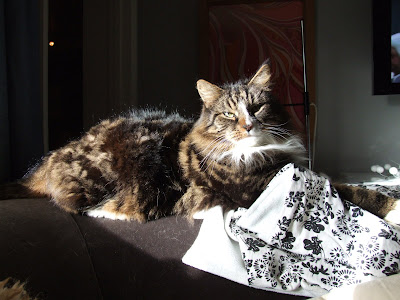 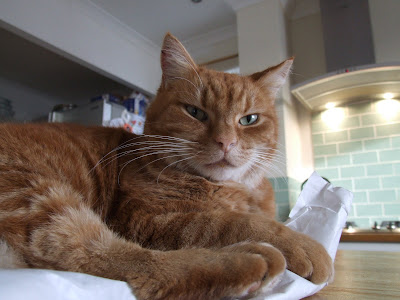 Yesterday morning I got up and padded across the living room to find a heartwarming site before me: Ralph and Pablo sitting beneath the stairs, both in identical, tucked-limb "zen duck" poses, with a mere eight or nine inches of carpet between them. Of all the long-standing battles between my cats, it has been theirs that, over the years, has been played out with most passion and pain. Shipley still baits and stalks Pablo, in his bored attention-seeker way, but Ralph, although the initial troublecauser in days of yore, increasingly seems to attack the ginger simpleton only through fear, if at all. When the two of them slink past each other, it's like watching two heavies in a film very slowly lowering their guns to the floor simultaneously, each never taking an eye of the other. They're obviously still hardwired for aggro in each other's presence, but I'd recently come to the conclusion that both of them had actually decided that all their fighting wasn't worth it and just wanted to be friends, and the only thing standing in their way was that they were both too proud and manly to be the first to admit it. Dee claimed that this was my anthropomorphism once again getting out of hand, and that they were simply two animals who naturally didn't like the way the other one smelled, looked or walked.

I felt, however, that the earlier scene went some way to vindicating my theory. "You should have seen it!" I told Dee, ten minutes later, by which time they had both moved. "It was like they were going to have a massive snog to say sorry to one another!". Ralph and Pablo often sit in the same place, but never at the same time, and only to wind one another up, but the last time they'd sat even four times this close to one another was two years ago, and that was only because Ralph was so doped up from a vet's injection that he probably thought Pablo was a giant furry tangerine.

My smug mood lasted until an hour or so later, when I was signing for a supermarket home delivery and heard a visceral, bone-shuddering war cry coming from the stairs. The lady driver from Tesco heard it too. "Oh, that's just my cats!" I said quickly, before she came to any conclusions that might be more readily associated with such a sound: that I was keeping Chinese prostitutes chained up in my crawl space, for example, or that my house was haunted by a one-legged karate Banshee whose suppertime had arrived early. By the time I got to the scene of the fracas, Pablo had curled into a ball halfway up the stairs, with Shipley arched over him menacingly, his mohican at full mast, and Ralph a couple of steps below, attempting to quickly spit out around forty percent of Pablo's winter coat. Much of the remainder could be found on the floor beneath him, although, examining the ratio of tabby-to-ginger fur, it's clear that Ralph's much-vaunted sideburns came out of the encounter worst.

I've taken a couple of photos below, which I think only go a short way to illustrating just how much cat was deposited on the carpet*. It's not an encouraging site, as you can see, but I am not going to let it get me down. I'm not quite sure what the next move is, but I have half a mind to keep the fur, and use it to construct an entirely new cat, half-tabby, half-ginger. I shall call him Ralphlo, and, with great skill and diplomacy, he will defuse their (okay, Ralph's) racial prejudices and teach them that, contrary to what aeons of hatred tell us, orange and randomly brownish mogs can live in peace. As an added bonus, what with not having any innards, it is unlikely that Ralphlo will deposit anything smelly or problematic in nextdoor's flower beds.

*It also must be taken into consideration that by the time I got the camera out Janet had stopped by to check out the scene, and had eaten some of the hair, as an "experiment" to find out whether it tasted as good as empty crisp packets. 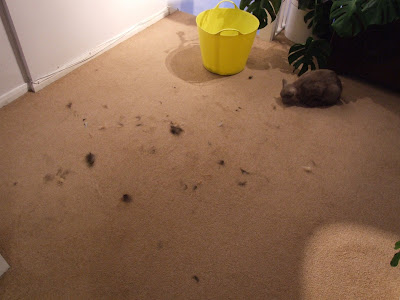 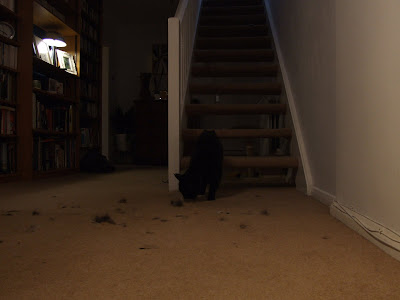 whoa! that is alot of fur!

Looks like OUR house after Calo and Sammi get into it. Or Sammi and Samuda.

*CURLED UP INTO A BAWL ON THE STAIRS* SNERK

See? The ginger prejudices have crossed over into kitty world.