A quick pictorial update on Samson, the bereaved cat from across the road, for those of you who read about him here and here. I learn from Louise and Daniel, his new owners, that he's settling in more smoothly at his new home every day, having spent much of the first day behind the sofa. He looks very happy below, and is clearly getting the round-the-clock brush action he demands. After a kiss with his new canine housemate, Rosie, he has also been demonstrating his very special "swimming" skills.

Jonathan, the son of his former owner, Jeanne, had told me that Samson liked to dab his paw in his water dish, but Louise and Daniel didn't realise until yesterday that in this case "dab" is a euphemism for "splash about like a man possessed". Not the most practical activity, when you've just had the big sleep to beat all other big sleeps and are resultantly in need of a drink of accompanying magnitude. But then, from my own experience, neither practicality nor drinking are traditionally the forte of the ginger cat. Just this morning, my four-legged carrotwit, Pablo, coerced me into filling a tall glass of water in the sink for him, which he generally prefers to such other, more staid ingurgitatory methods as Lapping Up The Stagnant Gunk From A Random Outdoor Bucket Or Birdbath and Drinking From A Dish Or A Water Dispenser Like Any Normal Bloody Household Pet With Half A Sense Of Decorum. Everything was going fine until, dramatically, the tap let out three tiny, slow drips, four inches from his left ear. You could see his brain processing this alarming attack on his person: "This water is very nice, but OH MY GOD WHAT'S THAT WET STUFF COMING FROM THE SILENT STEEL BIRD ON THE PORCELAIN THING ON THE WOODEN THING, I DON'T LIKE THAT, IT'S HEAR TO KILL ME ISN'T IT I KNOW IT IT IS." To his credit, he braved it out for another three seconds, before deciding it would be safer for all concerned if he went and hid behind the LP shelves until the trouble had blown over. 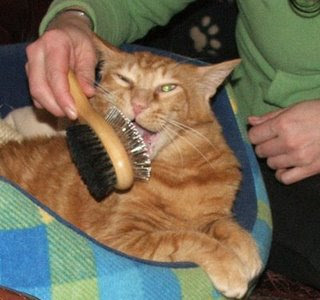 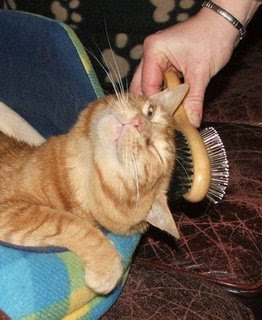 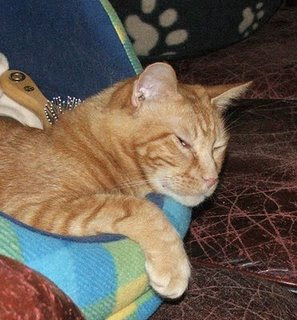 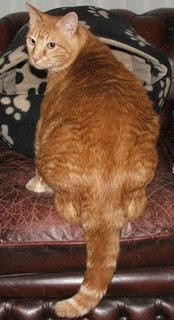 what a gorgeous big boy! I love big cats.

he looks like he has settled in very well, and I cant believe he was ok with the dog! great news :)

Awww Samson is adorable, he looks so at home.

Great news the fog doesn't worry him and that he sounds like he's settling in really well.

I'm sure that was a typo, Vicki, but I kind of like the idea of a cat who is slowly, triumphantly overcoming a crippling fear of fog.