Readers of Friday's posting will already know about the sad tale of Samson, the giant ginger cat from across the road from me, whose owner, Jeanne, died recently. A few of you have asked for an update, and I'm very pleased to say that, yesterday, Louise, a workmate of Dee's, and her partner, Daniel, came over and collected him from Jeanne's house. He was sitting by the fire when we were shown into the living room by Jeanne's son, Jonathan, and looked a little glum, but was soon up on Daniel's lap, purring and biting him affectionately (if a little painfully): a puddle of cat with a beatific head on top, demanding to be brushed.

"We have been trying to feed him a bit less recently," said Jonathan. "But he does still expect a chicken wing every day."

"Do you want to go away and think about it for a a couple of days?" Dee asked, not wanting Daniel and Louise to feel pressured. But Daniel had the facial expression of a ten year-old who'd just been given the choice of when to open his Christmas present: on Christmas Day, or on December 23rd.

It was obvious that there was only one way this was going to end: Samson was going home with Louise and Daniel there and then. Promptly, Jonathan disappeared from the room, and returned with Samson's toys: one of the biggest scratching posts I've ever seen, all manner of balls, esoteric mats, catnip creatures, brushes and what I can only describe as possibly the world's first cat skateboard. I'd felt certain that that had to be the lot, but another two journeys followed, the final one bringing forth a set of special coasters Jeanne had had custom-made, emblazoned with Samson's face (see below). I only just held back the tears at this point, remembering just how much Samson had been loved, how worried Jeanne had been last year when she lost him for half a day and came over to ask me if I'd seen him (she later found him under - completely under - her duvet), and how she agonised over the thought of him crossing the busy road outside. Somehow, looking into Samson's big dumb happy moonface, "road sense" was not the first phrase that sprung to mind. Often, Dee and I would carry his placid, backbreaking form back across the tarmac when we found him loitering by our bins looking confused, like some geographically-challenged runaway from Feline Fat Camp.

Fortunately, Louise and Daniel live on a very quiet back road. But it must be tough for Samson right now, who, until 3pm yesterday, was probably still wondering when Jeanne was coming back, and how much free range poultry she'd have with her when she did, and is now probably wondering why he's in an unfamiliar house with three new furmates (Louise and Daniel's cats, Ellie and Daisy, and their small dog, Rosie).

"It's more tense here than a Gaza negotiating table. We're teetering on the brink of peace with a unilateral cease-claw from Ellie and Daisy," said Daniel last night. But from what I know of him, Samson is a maker of love, not war - although not, thankfully, in any literal sense - and he should settle in after the inevitable period of setting out the ground rules. Daniel and Louise recently formed a strong bond with Garvey, a cat they took in when Daniel found him at the college where he works - until, finally, heart-wrenchingly, after many, many weeks, Garvey's owner came forward and claimed him. The signs were, particularly when Samson was stretched out on Daniel's lap, that he will amply fill the gap left by his predecessor. 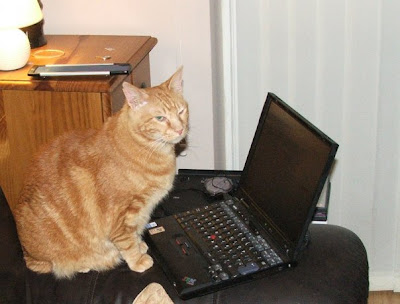 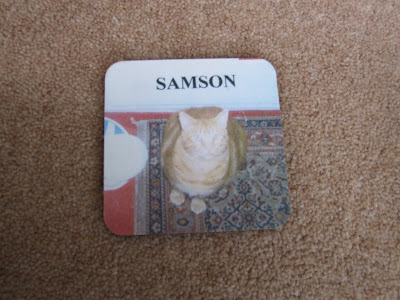 Thanks for the update, I do love a happy ending! >:oD

He's a beauty and I'm so glad he's gone to a couple who are obviously going to love him just as much as his previous owner did.

I got a lump in my throat just reading about the coasters, so I can imagine how you felt. Little reminders of how much someone (be it Puss or human) is missed.

This Christmas, one of my friends got two photos of The Tig and my other cat, Timmy, who sadly passed away last year. She had them blown up and put into frames and they are absolutely lovely. I freely admit I wept like a good'un when I opened Timmy's one. My mate was worried that she'd upset me, but they were happy, memory-filled tears because the pictures she'd chosen summed him up perfectly. They have pride of place in my living room :-)

It's the little unexpected reminders that get us the most, but I'm sure that your neighbour would've been very happy to know that even though she's not here to care for him, Samson is in a safe and secure home with all his toys and (potential) chicken wings and that he is nowhere near any busy roads. As owners, we can't ask for more than that after we're gone!

What a great story with a happy ending...we are so happy Samson found a good home...we're sure Jeanne is smiling down on all of them...

Thanks for the update - what a happy story! He is a very handsome cat and im sure he will be just as loved in his new home!

May Jeanne rest in peace and confidence, knowing her beloved is in good hands. And while it's sad for this family that Garvey's person reclaimed him, it's wonderful that the person did so! We need more positive devotion and commitment to our loved ones like that. Sure hope Samson becomes an indoor-only cat, as all cats should be for their own safety; and save me a wing, Big Guy! ;)

I am so glad that Samson found a new home with beans who will love him as much as Jeanne did.

I just love that she got coasters made of him. Bless her cottons. There's a special place for her in heaven most definitely.

I know a similar looking cat in the Illinois-Iowa area of the USA who needs a home. He was left behind when the young lady who owned him took a job in England. Her parents promised to care for him until the (6 month?) quarantine period elapsed, after which he could join her in the UK. Now the young lady is moving on to France and told her (somewhat allergic) parents that she doesn't want to try to find an apartment in France that allows cats. They need to find him a permanent home.

Any midwest USA readers looking for a good boy cat can email me.