Get A Life, Cats!

I've been thinking recently that actually, contrary to what they seem to believe, my cats get a pretty good deal. All right, so I've exploited them for commercial gain by dishing the dirt on their personal lives, but it's not as if they don't like the attention. You only would have had to see two minutes of Bootsy with the photographer from The Times last summer to know that every fleeting moment of her F-list fame more than made up for the fact that I had referred to her as a pewter dictator in a book easily available to a sizable portion of the Western World. It's not just that they get fed, cleaned-up after and provided with a large selection of comfy surfaces to despoil and drape their indolent limbs over in return for doing NOTHING, it's also that, in payment for doing the same big fat sold all, they get written about and admired by complete strangers.

And, of course, they are not the only ones: cats are everywhere you look on the Internet these days, and it's perhaps about time we started asking: Do they really deserve such exposure? And: what, when it comes right down to it, have they done for us? This is part of the philosophy behind the blog Fuck You, Penguin, which not only speaks out in a timely manner against the derivative stylings and creative predictability of cats, but penguins, gazelles, and all manner of supposedly cute and fluffy creatures. I'm a little concerned that their wrath has also been directed at capybaras, since I believe them to be above reproach, but I guess I can let that go. I will certainly be making a point from now on of turning to these sage, fluffy bullshit-detecting individuals for solace at those times when I walk out of my bedroom bare-footed and step on a vole spleen or find myself on my hands and knees, cleaning duck crud off the jetty in my garden - times, let's face it, when a visit to cuteoverload.com only emphasises a sense of being alone and misunderstood in the universe.

And, yes, they're right: all cats DO do the pose below. It's nothing "special" or "quirky". So sort it out, losers. And that includes you, Pablo. 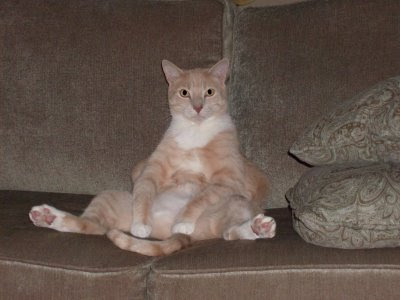 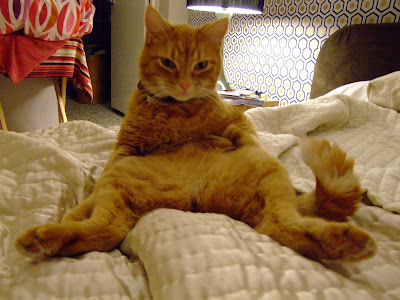 Squeaky also does this pose. Alot. And he has a bald patch on his stomach (he has it for The Fashion) so it looks even funnier.

Yeah, but the point is, they do it much, much cuter than any of us could ever even aspire in our wildest dreams to do. THAT'S the point and THAT'S why they deserve our admiration, adulation, and adoration. ^^

If only Pablo had been displaying his trademark tongue-hanging-out maneuver, that picture would definitely have topped the one of the ginge on FUP.