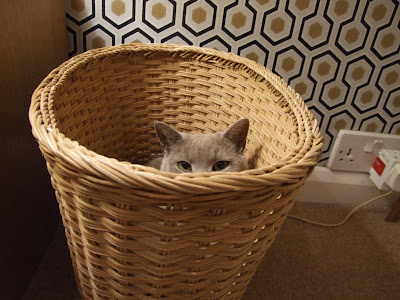 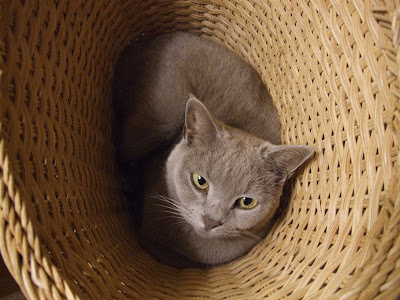 The above pictures show Bootsy, my smallest and most demanding cat, indulging in her latest, most impressive habit: curling up in the wastepaper basket in my bedroom. It doesn't bother Bootsy one iota that she's sitting in what's essentially a slightly upmarket dustbin. And why would it? After all, she lives in a house where random ancient crisp packets and sweet wrappers are often strewn across the carpet, courtesy of Janet. Although she's not asleep in the photographs, she often dozes off in the basket for periods of up to four hours. Admittedly, the first time I saw this I thought it was very sweet. It's also impressive to see the skill with which she manages to nimbly get into the basket without tipping it over. You can see from her face that she's incredibly pleased with herself about it. In her head, she can probably already picture the resulting greeting cards flying of the shelf, the aunts and grandmas making cooing noises.

I see Bootsy in this instance as a little like me, when I won my first local golf tournament the age of 14. I thought I was Seve Ballesteros, but in reality I had simply managed to hole a few more putts than various part-time players from the East Midlands, the most fearsome of which being bloke called Maurice, with a hip problem and a struggling garden landscaping business: there was a big, competitive golfing world out there, and it would soon come to devour my delusions. Because, really, in the grand scheme of things, how cute is Bootsy in this picture? Right now, as we speak, there are cats sleeping in all kinds of unusual and impossibly cute places. Who knows? In the last five minutes - that's right, the last five minutes - a tabby could have curled up on a goat's stomach, or inserted itself knowingly into the family wok. Bootsy, having never been out of East Anglia, is not aware of just how many other cats are in the universe and that many of them are even more deviously adorable and self-consciously "Who? Little me?" in attitude than her. I would be cruel to expect her to be.

But, as regular readers of this blog will know, I like to try and keep my cats grounded, so, for fear that Bootsy develops any warped ideas about her talent for narcoleptic cuteness, I have decided to provide the following examples of sleeping cats. These are not meant to discourage her from future experiments - there's nothing I'd like more than to come home this evening and find her wedged happily inside my computer printer or one of Dee's Ugg boots - but to give her a very real sense of the competition out there. I hope that she takes heed, although what seems more probable is that, when I put her in front of the screen of my laptop to face the hard facts, she will ignore them, preferring to chase the cursor for a few moments before jumping down onto the floor and cleaning her bottom in a loud and disinterested manner. 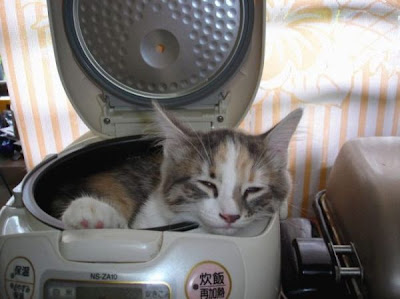 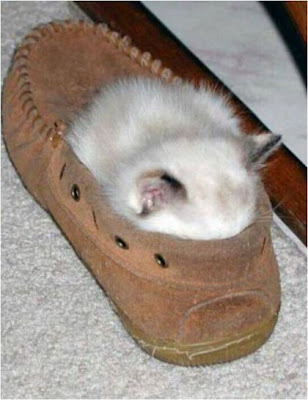 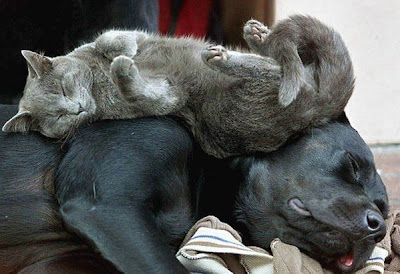 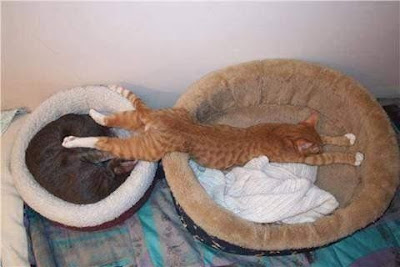 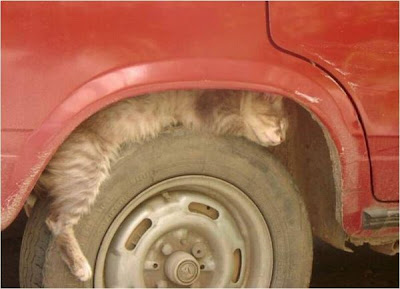 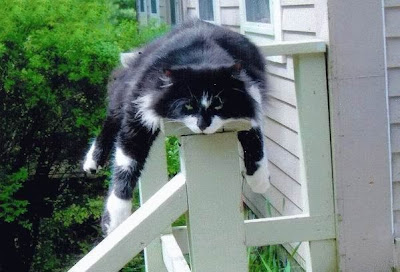 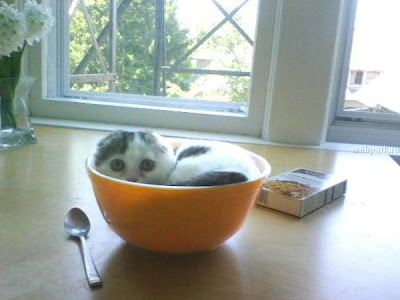 bless Bootsy, she is very cute! Cats alway sleep where they are not suposed to, it seems to be in their DNA!

I love Bootsy! This is what I did last night....

I kissed a cat, by Kitty Purry (aka Natalija Harbinson, sung to her Tomcats last night, Rocco and Luca):

This was never the way I planned
Not my intention
I got so brave, drink in hand
Lost my discretion
It's not what, I'm used to
Just wanna try you on
I'm curious for you
Caught my attention

Yes, I know your names……Rocco and Luca
You’re my pets, It doesn't matter,
You're my experimental game
Just human nature,
It's not what,
Good girls do
Not how they should behave
My head gets so confused
Hard to obey

My Tomcats we are so magical
Furry skin, whiskered lips, so kissable
Hard to resist so touchable
Too good to deny it
Ain't no big deal, it's innocent

*Incidentally, Kitty Purry is the real name of Katy Perry’s cat and yes, I sung this to Rocco and Luca as a joke! I love “my boys” but in a totally healthy way…… Luca flattened his ears when I sung it [cat speak for ‘One is not amused’], a bad sign? Rocco, seemed to enjoy being serenaded....hmmmm....

Bootsy might have quite delicate self esteem! You must tell her she is the most beautiful cat ever, at all times.

I tell Squeaky this...I'm pretty sure his self esteem is well intact but I'd rather err on the safe side. Just in case.

Bootsy is just plain adorable. All those other cats are, too. Because ALL CATS are cuter than anyone else in the universe. Admit it.

And Natalija, I'm having a passionate affair with my male Maine Coon, Sammi. He lies full length beside me, in my arms, under the faux fur throw and helps me watch tv at night. And I'm not the least bit ashamed to admit it.

Those were such cute photos!! Adorable.

These shots are brilliant. Did you use them in your book? If not you could create a new book of cats in crazy sleeping positions. Since cats like to sleep a lot you will have to be creative to find the spectacular ones.

And Natalija, I'm having a passionate affair with my male Maine Coon, Sammi~~> Now *that* is what You Tube accounts are for!!! Though the LA metro area must be hot, hot, hot with all that fur! Rocco and Luca *DO* actually sleep in my bed at night so they have me completely whipped. I love holding them in my arms like babies. Thank God for cats! I wonder if there is a support group for cat obsessives?