Who? Me? Completely At Home In The Water. Always Have Been. 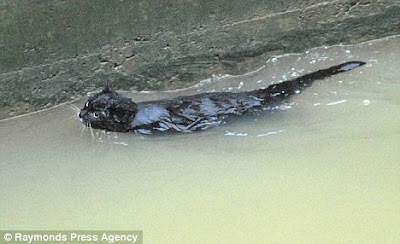 The other day The Bear (that's sadly not him pictured above, in otter mode) came home completely drenched, with that eager, faux-affectionate "Get the tissues then - what are you waiting for?" look he favours after being caught in anything more than a mild shower. Nothing out of the ordinary there, then. Except it hadn't been raining for at least twelve hours at the time, and it's not hosepipe season, so there does not seem to be any obvious explanation for the state of his fur. One theory is that he had just got back from a swim across the mere (or "glorified pond" to non-East Anglians) that cuts in at the bottom of my garden. This seems a bit far-fetched - the water is very deep, and about 3-400 yards across at its narrowest point - but on the other hand there are probably plenty of tasty niblets to be found on the other side in the bins of the cafes and pubs abutting the water. It would also explain the time he mysteriously appeared on the opposite bank of the river next to a house I once rented, even though the nearest bridge was more than a mile away. The jury is still out, but this news story from last week and the video below suggest that cats might not be quite as afraid of swimming as we're led to believe.

Villi will sit in the rain for hours. He comes in completely drenched and gets towel dried by me. This is a now a game of rubbing and semi-break dancing - on his behalf, not mine, I gave up years ago. He then goes straight back out and sits in the same middle of the garden spot. If I had a pond I think he would swim in it. He tries to get in the bath when I am in it.