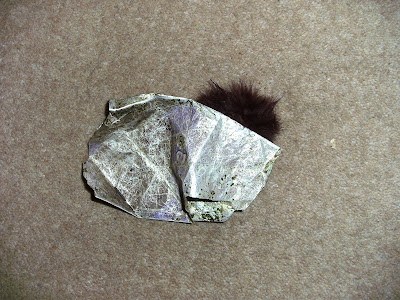 Regular readers of this blog will know that my cats are all very ambitious artists, never happier than when pushing the boundaries of the negative space around an object, and stretching the meanings of that negative space. They're also very fond of a mysterious, sinister furry toy that arrived, unbidden, through the post a year or so ago, which I refer to only as The Thing. In Janet's latest work - which he painstakingly installed at the bottom of our stairs last week, watched by Bootsy - he combines both interests seemlessly, then, just to confound the critics, references his recent habit of wombling for rubbish at the bottom of my garden.

Janet on Throwaway Sky: "I think of Throwaway Sky as not only a tribute to the power of ephemeral, discarded artefacts, but also to fur, and how that fur can shield us, not only from the cold, but, on a deeper level, from ourselves. A few people have called it "post-Damien Hirst", but, while I acknowledge Hirst's influence, I think it's a mistake to say a work like this is "before" or "after" another artist. It is not beyond Hirst, or behind him. Rather, it is off to the side of him: to be exact, about three feet, at a kind of diagonal angle, with a pleasant southerly view, overlooking some trees. Who's to say that it has any more in common with Hirst than it does with the red clay figurines of Antony Gormley? Not me, and not the many, many people (almost seven, at last count) who have looked at it over the last week or so. As you can see, the angle at which I have placed the now-anonymous and faded plastic wrapper means that The Thing is covered, but not completely, suggesting that its protection from whatever happens to be above - in this case, an unseen spotlamp from B&Q, but, in theory, the eternal unseen anything - is not complete. The "rubbish" in this case makes us think not of rubbish as we imagine it in bins, but the stuff of the dustbin of history: our culture, once fiercely clung to, soon forgotten. Soon, Plastic Sky, like so many other things, will be gone (it's vacuuming day tomorrow), but that is part of its very beauty. Unlike the way the wrapper is to The Thing, it is not stuck physically to our heads, but it may as well be, as it constantly hangs over us, reminding us of our transience on this planet. The biggest question raised by Throwaway Sky being perhaps: "Thing or wrapper - which is the real load of old crap?". 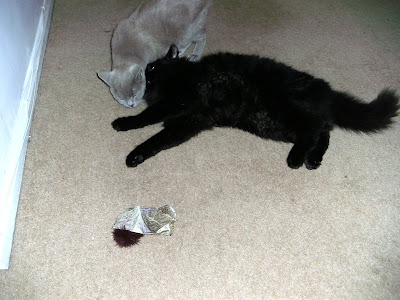 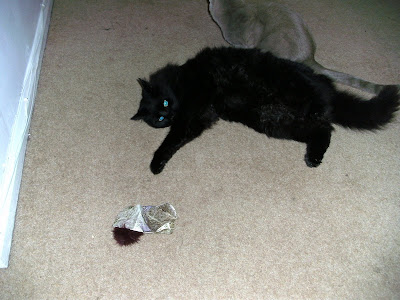 Me nuh know about art. But the CATS are masterpieces!

I love Janet's artwork. Such talent.

very well done! i see Janet does not waste his time at home all day.

My brother Dave the Cat once achieved the height of nouvelle cuisine presentation by carefully placing a stunned mouse on top of a bowl of IAMS. Unfortunately he stood back to admire the effect, and the mouse came round and scarpered pronto. So glad Janet managed to maintain his installation for long enough to preserve it for posterity!!