Guest Cats Of The Month For January: Oscar And Molly 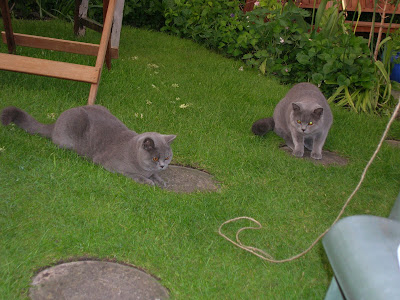 Owners
Phil & Denise think they are!

Catchphrase?
Move over I'm coming through.

What constitutes a perfect evening for you?
Oscar: curled up on the comfiest chair in the house
Molly: hunting anything that moves.

Favourite food?
Hill's Science plan, chicken or rabbit, just moved onto the light stuff as the waistline is expanding.

Defining moment of your life?
Moving to rural Oxfordshire where shrew's and voles abound aplenty.

Any enemies?
Nobody big enough. And we are British Blues don't you know.

If you could do one thing to make the world a better place for felines, what would it be?
Rid the world of dogs!

If you could meet a celebrity who would it be and why?
Tom & Dee Cox, 'cos they seem like really nice people with their feet on the ground.

Which one of the cats in Under the Paw would you like to be stuck in a lift with?
Probably Janet, you sound very entertaining.

Biography
British Blues. Oscar is growing into a giant, weighs a ton, Molly is more dainty with very large amber eyes, she is an avid hunter and always brings home the bacon. Oscar lazes about with his big grumpy face and looks at her latest conquest as if to say "What have you been up to now and where is my tea"! We live in a bungalow that backs onto fields 12 miles south of Oxford. They seem to be in cat heaven and aware of their pedigree status, they look at other cats as if to say "Don't you know who I am".

Over the last 38 years we have had a number of cats, our last British Blue (Henry) survived about 16 years, for the first time in our married lives we had a 2 year break but could not stand it any longer and 3 years ago we bought each other Molly & Oscar as a Christmas present to each other. We have 3 sons all grown up now but all have cats, I think men like cats but keep it quiet. 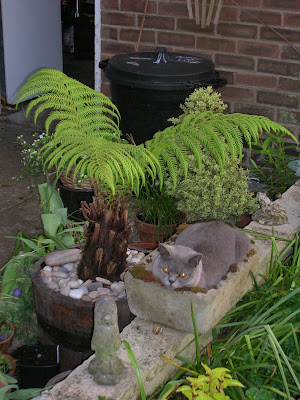 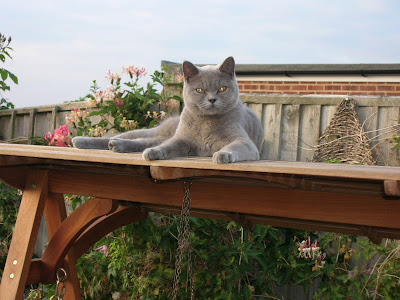 Oscar and Molly are two gorgeous blues, and I'm sure their people are happy to be owned by such fine felines!