Library Cats: About Time They Came To The UK? 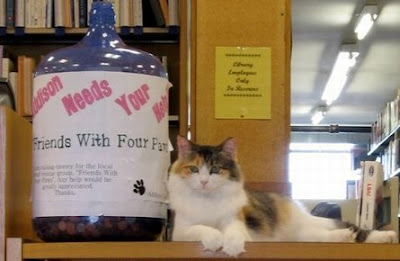 I've been to lots of bookshops with resident cats, but am yet to visit a library with its own moggy. Nobody in America seemed to think it was particularly unusual that Dewey, the bestselling literary cat of the last year, lived in a library. But in Britain, the idea of a library with a cat would still be very strange: maybe not quite as odd as a Citizen's Advice Bureau with its own iguana, but not far off. I can, in a way, see the reasoning behind the reticence. Nobody really wants their large print Maeve Binchys weed and puked on. If I, for example, were to drop Shipley off at my largest local library, in Norwich, it would only be a matter of time before he'd located their copy of Under The Paw, and started his own destructive, fangy critique of it. Pretty soon, someone would have called the pest people in or chased him into the local Pizza Express, and all hell would have broken loose. But on the whole I think Britain needs to get with the times, when it comes to bibliocats. Who knows? Perhaps it already has? There must be one library cat in the UK and, if anyone has any information about it, I'd like to hear about it. As it is, this list of top library mogs remains entirely US-orientated.
Posted by Unknown at 03:15

We do have quite a lot of Pub cats here in Britain. Maybe that explains the difference between the UK and USA?!

Surely the most famous library cats are Baker and Taylor. (You can read about their story here http://www.baker-taylor.com/mascots.htm) But that was many moons ago; I'm really surprised that they still have Library cats in the US. Surely someone who was afraid of cats would turn up, be 'traumatized' by its purring, and sue the library for millions. I know here in Canada it would be against health regs as it's a public space, and people might be allergic.

In the early 1980's I worked in the public libarry at Beeston (near Nottingham). We had a library cat called Bertie - a large black and white moggy. Obviously, he is no more so perhaps doesn't count.

I remember seeing the manuscript for that book when I worked at HC...so cute! We should be more relaxed about pets. When i was in Bruge, every night we went to a bar where a cat sat on top of the drinks cabinet and looked down at you. In England, heath and safety would have been in within minutes to escort the animal off the premises. We have too many rules these days - takes the fun and quirkiness out of everything...

Not a permanent resident, but I think he definately counts as a library cat!

Yes, I've been suggesting a library cat for years! We can't have them for many reasons including because some people don't like them (can't get my head around this concept!) and some people are allergic.

I worked in a library in London many years ago, and we had a regular cat visitor who used to sit on the counter observing everything. He never peed anywhere or attacked books or readers. Most cats have better manners than that.

I think managers etc. worry about liability and responsibility - who buys the cat food and pays the vets' bills etc. In a project I worked in later on, a cat adopted us and all the cat lovers just provided cat food as a matter of course. I'll always remember Ginger sitting on the manager's lap during staff meetings.

We have them here in NZ: http://www.odt.co.nz/your-town/waitati/59516/hospitality-runs-out-blueskin-library039s-cat

although this one was a bit unpopular but some people are just mean.

In Brooklyn, we see cats everywhere, in stores, and delis. Why not libraries?

Poor Mimi. Weird: They talk about her "taking a swipe at young children" like that's a bad thing.

When I was working in school libraries I idly googled for library cats and found lots of them in Primary school libraries in America. My hairdresser has a visiting cat who always makes a bee-line for my lap when I come in.. it's great to sit under the dryer with a warm purry cat on my lap.

There is a great old cat that lives in the Astor Movie Theater here in Melbourne Australia. I'm not sure how old he is but he'd be at least 15 years. He's been known to sit on people's laps while a movie is playing. Here's a link and a photo http://www.astor-theatre.com/images/web-gallery/astor-today-d/slides/astor-marzipan.html

pfft what spoil sports. i'd just put a sign on the door saying 'if u don't like the cat your not welcome here'.
i'm sure lots of people would love to see a cat at the library etc, not everyone has the time and space to have their own.
the only shopcat i've seen was at a supercheap auto in carnarvon, australia. gorgeous little thing, missing an ear because of cancer but the most content kitty i've ever seen.
it was clear to see the boys running the store adore her, and i've got to say i did too.

As far as I recall without looking it up, Baker & Taylor belonged to a publishing compmay, rather than a library. But there are still library cats in a number of countries, particularly the US: see and follow the links for a good selection of library cats there, and also a few in Germany, Poland, New Zealand, and other places. Some US libraries have taken on cats quite recently. And, contrary to what Ms VG said, there are a few library cats in Canada.
On the same website you will find accounts of resident cats in hotels, churches, museums, veterinary clinics and so on. The health and safety 'police' have not yet reached everywhere!
I know of a number of bookshop cats, but so far haven't got them up onto the website.

near me in SW Scotland, I know of a shop with 2 resident collies who sleep on a bed in the window and, until recently, Kirkcudbright had a resident "town" cat....he was a stray but was welcome in any of several shops and slept in their windows.