Walking With The Gingers 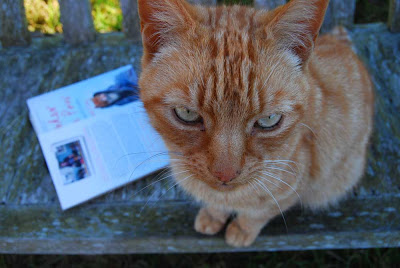 Earlier this week, I was in St Davids, on the Welsh coast, with the artist Jackie Morris, who writes We Three Cats, which is paws down the most visually stunning mogblog on the Interwebs. Jackie doesn't actually have three cats; she has six, like me, and early on Wednesday morning, the more intrepid individuals amongst them, Jackie, a very nice photographer from the FT called David Barnes, Jackie's three dogs and I strolled up the hill from her brilliantly ramshackle storybook artist's cottage, passing standing stones and curious cows, to the huge lichen-covered rocks overlooking the sea. I won't say too much about it here, as Jackie has already posted about our day, and I'll be writing about it in more detail in my capacity as occasional walking correspondent for the FT, but it was an experience every bit as magical as I'd hoped, and a lesson in the often misunderstood sociability of cats. I wouldn't like to pick a favourite of Jackie's cats, as they each have their own strong, winning personalities, but I did particularly enjoy meeting Kiffer, her most recent rescue, who likes to kiss cows, play exaggerated games of hide and seek with humans, and - owing to a kittenhood ear infection - walks and stalks with his head tilted to one side. 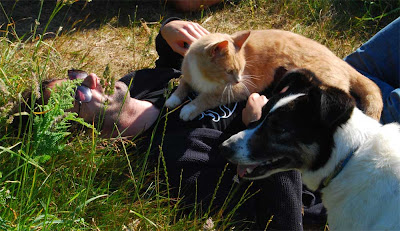 Ah...lying in the sun with a mog on one's chest...perfect. Our favourite outdoor-repose line-up is our little cat lying under my knees and the huge one curled round my hip. Eyes closed...sniffing the breeze...

Kiffer says he misses you too and he hasn't finished playing that game of hide and seek, and when you come back you can carry on. And he also says that She is getting Her publisher to send you some books and her feet smell like a skunk's feet.
The sun is shining. We will be walking later and we will be happy.

I adore this blog, I really really do - it is so original, beautiful and wonderful! She is a lucky woman!

I love the ginger cats! Their photos are works of art and the words are magical.

You are so lucky - that place! Those cats! Too pretty for words.

Kiffer is adorable. @Lester's has described a favorite dream. And your blog is wonderful! Love to Janet and Co.

I love the Ginger Darlings' blog. She is so amazingly talented. I can't imagine how she comes up with all those different photos of her cats. In addition, her location is spectacular. The only place I know that could compare is Flamborough Head, my childhood home -- thus the name 'flamblogger'.

Ah, yes! We saw you at the Gingers' blog and wished we could have met you. But we are a bit far away!

I saw arn the Geengehairs' blarg thad you wore a Geengehair como a scarf aroun'your negh...an' so I came to see who ees thees Man who ees so brabe an' onafraid ob meesseen' his jogular...