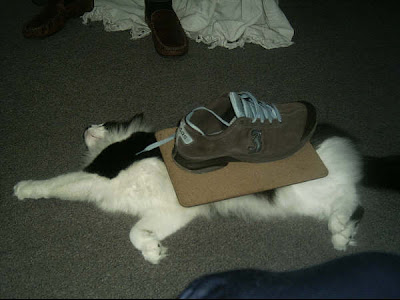 How intelligent are cats, really, when it comes right down to it? As I've often said, my own seem to cover the entire spectrum from scheming masterminds to out and out dunces. I don't feel that the former need any encouragement in their gradual takeover of the world, so I have no plans to run a Brainiest Cat Competition, but I am now opening entries for the second annual Most Witless Cat Comp. For those who want to get an idea of what it's about, check out
last year's winners.

The rules are the same as usual: post your picture on Facebook (preferable) or send it to underthepaw@tom-cox.com either with or without supporting account of witless feats. Cats who entered last year are banned, unless they have attained new standards of witlessness in the interim. Prizes will include a signed copy of Under The Paw for each of the three top entries. Entries close on June 16th.
Posted by Unknown at 23:24

I've left my entries, it was hard to pick just one witless photo so I did a multiple entry! Jeannette

LOL, funny picture. Our cats would not tolerate anything on them.

I like Pellos - particularly the way that dog can't get a look in!

awesome photos, love the one of the cat with the iron on him!! Can't believe he's lying there!