The 2009 Most Witless-Looking Cats Competition: The 4 Winners (In No Particular Order) 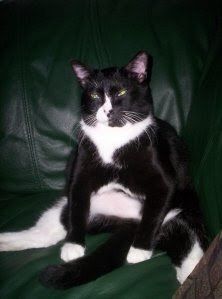 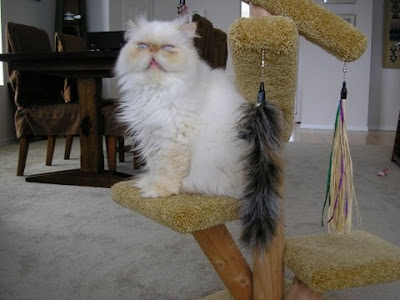 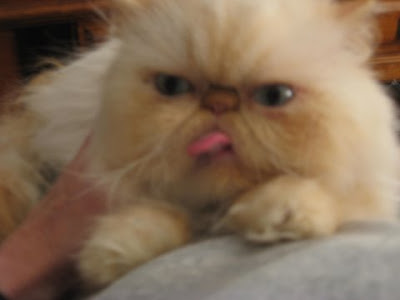 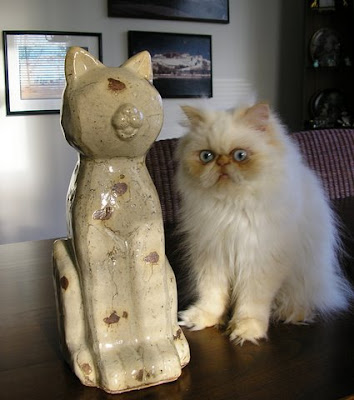 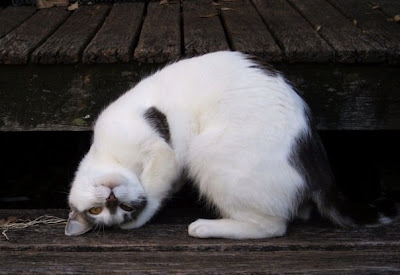 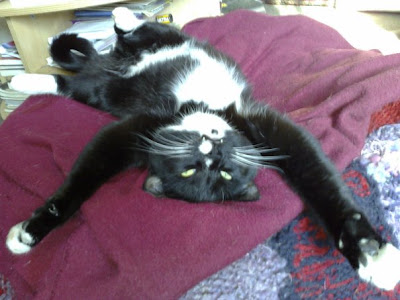 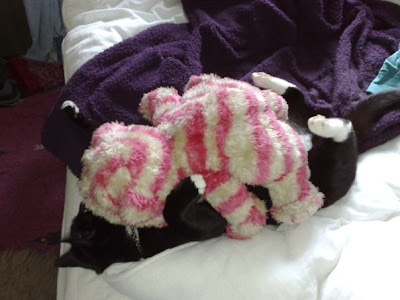 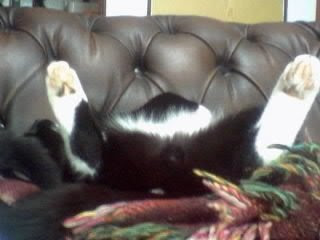 Okay, so I said I'd pick just three winners, but Lindsey, who submitted her Bagpuss-loving Villi, actually already won a copy of Under The Paw in the Tough-Looking Cats comp back in spring (with Furball), and has very generously said I should give her prize to someone else. I'm not going to say which of the other three cats is the "extra" cat on the list, as judging this year's comp has been harder than ever, and I think all of these four cats are of equal witlessness. There have been some others who came very close too. Most notable of these are perhaps the anonymous cat who had fallen asleep on his/her neighbour's fence post and Pellos, the indoor cat who had such a pleased-with-himself expression having escaped from the house for the first time and immediately caught his first bird. Animals kill other animals, but I wouldn't want to be seen as condoning avian slaughter, and also I think - as hilariously witless as Pellos looks - his bloodthirsty witlessness is not quite as purely, plainly witless as the other cats here. Okay, so Villi and Tim do have their own props, but they are more subtle ones. Fats, meanwhile, takes the classic "cat slob" pose to new, undignified heights, and Fred... well, I have no idea how Fred got into that position, but he clearly had to be a heroic kind of div to do so.

Each of the winners will receive a signed copy of the paperback of Under The Paw, and a Yeowww catnip Purrr-muda! Triangle (see below). If you happen to be one of them, and have not yet sent your address, please do so (underthepaw@tom-cox.com). Prizes will be sent out at the end of this week. Commiserations to all the losers - you'll just have to work extra-hard on being more braindead between now and next year's competition....

beautiful!
congrats to Tim, Fats, Vili and Fred.
they have brought joy to my life with their witlessness :-)

Excellent choice of winners :)
They are all gorgeous... :)

All very beautiful and very witless! Lol! Congratulations to all contestants and winners. Katinka and Nina will be working on cranking up their witlessness a few notches for next year! Jeannette

Echoing the above posters' thoughts, and adding my own conCATulations. Though my #1 didn't even get honorable mention, I must admit, they are all priceless!

Well done Fats, Fred, Tim and Villi, such deserving, funny, witless winners in this hilarious competition. I especially liked Fred who has obviously been attending yoga classes! I'm very pleased that my sleepy cat contender got as far as he did as he created many smiles amongst my friends whenever I showed them the photo on my camera phone. I did think that maybe Janet or The Bear might be able to shed some light on his identity as the cat was snapped in their previous territory in southeast London.
Brilliant competition. Fantastic winners!

That last photo of Fred? Made coca cola come out of my nose.

These are the cutest photos I have seen in a while! They definitely brought a big smile to my face!

Check out my blog about a colony of abandoned/feral cats near my home. There will be stories there as time goes on that could inspire and inform anyone you know who wants to help homeless cats.
http://homelesscatcare.blogspot.com/
Would you add me to your blog list?

Hello Debra. I've added you to the blogroll!