Guest Cat Of The Month for June: Ju Ju 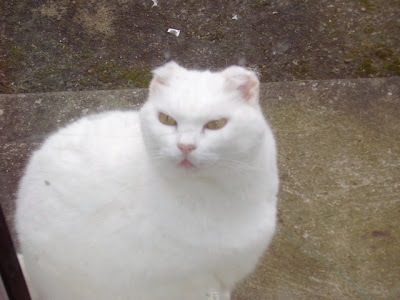 Favourite habits?
Shouting imperiously, sitting down on objects (pieces of newspaper, cushions, books) that happen to be on the floor, eating, glowering, getting under people’s feet.

What constitutes a perfect evening for you?
Shouting to go outside, sitting outside the back door shouting to come back in again, sitting on people, insisting noisily on going outside just when owners want to go to bed. As the veterinary nurse at the cattery once said politely, “she’s very vocal, isn't she?"

Favourite food?
Tuna. Although I am only allowed this on special occasions, and only when it has been in spring water, not salty brine. I live in hope, however, and get very excited when any can is opened, even if it is something I would never
eat, like beans or tomatoes.

Defining moment of your life?
The removal of my ear-tips in 2006 thanks to skin cancer. My owners were very upset at the time, but when my ears healed and my true roundy-eared glory was revealed they realised I had obviously always been destined to have these bear ears.

Any enemies?
Any cat foolish enough to come near me. If any come into the back garden I puff myself up to twice my usual size and emit strange wolfish cries. Past enemies include the late lamented (but not by me) Mittens from across the road, and the twin kittens who live down the road but who seem to have accepted defeat because they haven’t dared come in for a while. Currently my enemy is Bobbie, the next door cat, who is a shameless attention seeker. I'm slightly confused by his habit of rolling around on his back rather than running in terror as soon as soon he sees me, which is what the other cats did. I don't know what to make of him.

If you could do one thing to make the world a better place for felines, what would it be?
Sun screen for all felines who need it.

If you could meet a celebrity who would it be and why?
Knut the polar bear, as we resembled each other when he was a cub.

Which one of the cats in Under The Paw would you like to be stuck in a lift
with?
I despise all other cats, but think The Bear has a certain je ne sais quoi. Perhaps my bear ears give me a sense of kinship with anything vaguely bear-related.

Brief biography
I have a murky past, but lived somewhere in the Irish countryside for a few years before being abandoned aged about three and taken in by a vet, who kept me in his surgery for a few months while he looked for a home. I moved to Dublin in 2001 when I was taken in by Anna and her then-housemates Eoin and John. Anna’s cat Spanky had been killed by a car a few months earlier and she had vowed not to get another cat for a while, but a colleague at the newspaper where she worked told her about this fat white monster who needed a home and she took me in. I was very, very shy and scared at first and refused to move from a single spot in the hall. And I didn’t make a sound for weeks. How things have changed! Now I live very noisily with Anna and her husband Patrick, and rule them with an iron paw. I’m not sure they treat me with the respect I deserve, and they and all their friends seem to find me strangely amusing, but they do feed me and attend to my door-opening needs, I suppose. 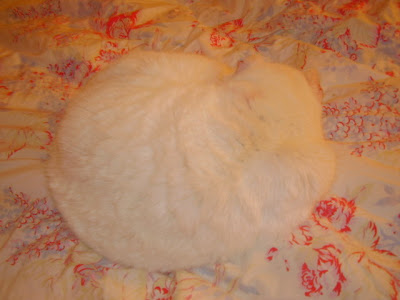 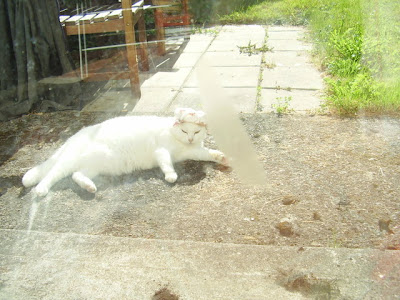 What a fab story. I think the rounded ears just add to the charm of this incredible kitteh. Glad she found some good humans to tend to her needs. xx

Ju Ju is gorgeous! I'm sorry she had the problem with her ear tips, but the look really does complement her, er, Rubenesque beauty.

I thought my Barney was huge but he is but a tiddler compared to this chunky cat.

Hi Ju Ju, nice to meet you! Sorry about your ears, I thought you were a Scottish Fold at first, but I'm glad you survived. Jeannette

JuJu, you are ADORABLE. I've met some other white cats with roundy ears, too -- in Utah, at Best Friends Animal Society, where there's a room just for cats like you! while they await adoption.

Keep on captivating 'em, girl -- and state your case. YOU'RE WORTH IT!

Squeaky thinks Ju Ju is super cool and has many of the same noisy and tuna related habits as he does. I think Ju Ju is a very pretty cat aswell.

Ju Ju's owner here - thanks on her behalf for the kind words! She is a hilarious feline with, ahem, robust self-esteem, and although we do mock her quite a bit, she is much loved.

Curious Cat, you should definitely warn your mum about Marley - it's a good idea to put sunscreen on his ears (the vet recommended using the sort suitable for baby's skin, in the highest factor possible). We had put sunscreen on Ju Ju from the time we got her but some of the damage was probably done in her youth, and until we discovered the skin cancer we probably weren't as vigilant about sunscreen use as we should have been. Hope Marley doesn't join the ranks of the bear-eared - although if he does, he and Ju Ju will be even more well suited! And it's good to know, jmuhj, that there are other bear-eared cats thriving all over the world.

I must add that since the photo of Ju Ju in her ridiculous knotted-hanky ear-protector was taken, she has lost a bit of weight. She'd been on the Hills Science "light" food for years but it didn't kick in until the last year or so. Initially when we realised she'd lost some weight we were worried because we were used to her being such a little fatso and got the vet to check her out, but he said she was in good health.

Ju Ju, tell your owners that some of the best cats ever, have wonky ears. I may be slightly biased ;)