Some More Recent Excerpts From My Cat Diary 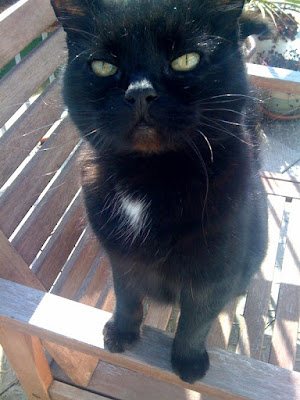 September 16th
Excited, having seen promotional literature for my home town mentioning "the famous ducks". Am now finding myself looking at birdlife around garden and local park in whole new way. That massive muscovy with the magnetic aura and strange sense of entitlement: he's got to be one of them.

Received missing parakeet missive. Parakeet in question answers to the name Charlie, talks and is "very tame". Religious flyers sticking out of my letterbox I can cope with of a morning. This level of emotional turmoil I cannot.

September 17th
I remember those happy, carefree times, seven or eight minutes ago, when there wasn't a slaughtered rabbit on my kitchen floor.

September 18th
Received a review copy of a memoir through the post today, all about a dog and the dog's owner, and the heartwarmingness of the dog-owner thing they had going on. From what I can gather, the main themes of the book are the owner, his dog, and how generally warming the whole thing was, particularly in the heart area. People should publish more of that kind of thing: it's a potentially enormous untapped market.

Still puzzling over dead rabbit. Ralph and Shipley, who are getting too spoilt and lazy to kill anything apart from the odd vole or seven, were sleeping at the time it was brought in, as was The Bear, who is a pacifist when it comes to non-feline animals (presumably it wasn't Bootsy or Pablo either, what with them having moved out a few weeks ago to live with Dee at her new place). I was alerted to its presence on the kitchen floor by the equally pacificist Janet, who was standing next to it, meowing in that special mournful way he only usually does when he's brought in an empty packet of Monster Munch dating from 1987. Was it a rotten rabbit, killed and discarded by a fox with fussy eating habits? Perhaps Janet mistook it for one of the increasingly popular Litter Bunnies being purchased and subsequently junked by spoilt children in the neighbourhood? Anyhow, it is in the bin now: a temporary solution before I decide I can look it in its half-remaining face again and arrange a more organic form of disposal.

September 20th
I note with some interest that The Bear is now cultivating his own special "piss meow". I'm not necessarily looking on it as a bad thing, as it serves as more of a warning system than anything. I suppose it's a bit like a smoke alarm. (Except with piss, instead of smoke, obviously.)

September 21st
Given the reputed commonness of the activity, it is surprising more celebrities don't reference their Daily Cat Puke Cleaning Session in The Sunday Times Magazine's A Life In The Day column.

September 22nd
Sometimes, when I stroke my cats, I get an electric shock. I suppose this is the natural result of the static created by the stroking itself, but I also can't help suspecting that they might be plugging themselves in behind my back. A couple of them have, after all, been working on a new sound recently. It's probably inevitable that Going Electric is part of it.

September 23rd
It's amazing how when a person own cats, by simply walking upstairs to do some ironing and finding a stray JML pet mitt on the floor and a nearby sleeping cat (Ralph, for example), they can inadvertently invent a new game. I have decided to call this particular one 'Happy Cat, Sad Cat', having discarded the slightly inferior working titles of 'Confusion!" and 'Dimpled Stroky Thing Good, Big Clanky Thing Bad'. The speed of the fluctuating feline emotions it elicits are nothing short of breathtaking.

September 24th
Went a walk today with my borrowed spaniel, Henry - a creature Dee once referred to as my "alter doggo". The setting was Blythburgh, near the Suffolk coast, where Black Shuck, the demon dog, once legendarily terrorised the local church's congregation. I'd like to say I deliberately chose to walk in Black Dog Country with a black dog, but in truth the symmetry didn't occur to me until I was about seven miles into the walk, and lost amidst river-damaged footpaths, by which point my appreciation of it was dampened, in an unpleasantly literal sort of way, by a shoe full of blister blood. Besides, the likelihood of happy-go-lucky Henry intimidating an entire congregation seems quite unlikely, though he did slightly unsettle a sleeping heron, which promptly shat itself.

September 26th
Most lovely Under The Paw-related letter of the week: "Just loved discover today that you have a book about cats feelings. Is possible I found this book in Brasil?"

September 27th
Earlier today, I stroked my beard. Not the most riveting anecdote, I grant you. What does make it marginally more interesting is that the beard in question was false, sitting on my bedroom floor, where I'd discarded it after he previous night's fancy dress party, and at the time I had mistaken it for one of my cats.

Labels: cat diary, under the paw

Yes, I've noticed, too, how massive muscovies exude that certain something. ;)

It must be the time of year -we too have mysteriously gained a slaughtered rabbit. The upset factor was lowered by the fact it appeared in the yard not in the house, but was raised by the fact it is (was) a baby one.
Over nine years and five cats I have gained everything from frogs, snails, dragonflies (great excitement with that one as it escaped upstairs), birds, bats voles, rats, mice, earthworms, lumps of moss, an old sock and a fleecy paint roller sleeve, but this was my first bunny. (Or rather ex bunny).
The mystery is that it suddenly appeared, stiff as a board, so I am hoping that it was found already dead and just collected, and that the murderer is not therefore in our midst. I did catch one of mine playing basketball with the corpse, but despite his name -Dexter- he has never killed anything that I know of so it remains a mystery.

very funny. I love these cat diary qoutes. some of them are so cute.unesso

Dee and Pablo and Bootsy moved out? Oh no.

Dee moved out? Are you sad? I'm sorry for asking a personal question of a complete stranger but somehow you don't feel like that much of a stranger...if that makes any sense at all. Simply adored the book, BTW!

Hello WatcherOfTheSkies. Yes, we split up a few months back. I didn't mention it at the time, as it's obviously painful and I don't really think it has a place as part of the blog, but felt the moment had come to at least refer to it, with Pablo and Bootsy now settled in their new home (I do still see them!), as it would become apparent to readers that the two of them weren't around any more. Very glad you enjoyed the book! The sequel is on its way next year...

Ducks are ace! We used to have an unhealthy obsession with a weird looking duck at Golden Acre Park in Leeds. It was a huge black thing, looked like a mallard in shape but slimmer with a longer neck. We called it Vince (Vince Noire)and would visit weekly. Couldn't find it in any books. Turned out to be a juvenile Eider Duck. I'm currently mates with a white Aylesbury duck called Fluffy head. Might post him on my new blog when I get round to it.
Sorry to hear about you and Dee, very sad. Nice you can still see Pablo and Bootsy.

About my cat Tyfoon..
Sad...sad...sad...
After twenty years of love and companionship, Tyfoon has gone.
She had fast-growing tumours and crippling arthritis and all she wanted to do was clamber onto my knee (unable to jump for some weeks) or sit in the sun. What was I to do? I wanted to keep her with me as long as possible, but her pathetic squeaks in place of miaows were telling me she was ready to go. The vet said if I left her and did nothing she would be dead within a week anyway, with the rate the tumours were growing.
So I cuddled her and held her and she didn't move except to nibble my fingers as the needle was slipped into her leg, and now she doesn't hurt any more, but by golly, I do!