Some Recent Excerpts From My Cat (And Other Animals) Diary 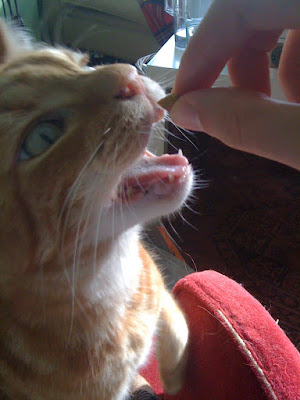 August 7th
Idea for TV Show: 'The 1980s Cat House'. 6 cats get forced to live for a week without access to camcorders, keyboards, treadmills or metrosexuals.

August 8th
People often think my life is far more cat-themed than it actually is. Nonetheless, the fact remains: I just got some Sheba on my best shirt.

August 9th
A cat with a messed up meow was meowing outside. Felt glad for not having cat who meowed like that. Went outside. Was my cat, meowing like that.

August 12th
Many people might think it impossible for a grown feline to burst into tears. None of these people, uncoincidentally, have met my cats.

August 13th
Lots of flies in the house today, and Bootsy is not doing her usual, reliable thing of chewing them up with a distasteful, confused look on her face. In her absence, I tried to find fly spray. Couldn't. Found Crabtree And Evelyn Nantucket Briar room spray. Used that instead. Didn't work. Not sure why I thought I'd find fly spray. I last bought some in 1991. And by "bought" I mean "found in my parents' house near some etchings".

Question: Do flies refer to flying as "ing"? E.g. "Bob waited til the exact last moment, when this week's Grazia was coming towards him, before ing off."

August 16th
Last golf major of the year, the USPGA, this weekend. Tuned in late. Asked friends if anything exciting had happened. They texted back to say "no" but cameras had been lingering on a stray turtle for twenty minutes by that point, so had taken this as a definitive answer in itself.

August 17th
You know your cat's got a lot of Facebook friends when he knows four cats called Chairman Meow.

August 21st
Off to Cattersea - aka Battersea Dogs and Cats Home - today to interview some homeless cats for the Times. I am taking a big bag with me. This is because I am reading a hardback book. THAT IS THE ONLY REASON.

August 22nd
Managed to resist temptation at Cattersea. Was particularly taken with black and white Thomas, who shows just how close you can take the shave in and still be a Cat That Looks Like Hitler. Also Malteser, on whose run was written "Love me, love my cheeks!". Sadly, before I met the latter, a four year-old child had loved his cheeks a little bit much, leaving me to deal with the concomitant hissing: a bit like the opposite of when you feel really good after opening a tight jar, because the person who tried to open it has "loosened it" for you. But with cats, instead of jars.

August 24th
It's always a bit of a shock when a band starts "working on a new sound" late in their career, but lots of groups do it. What is much more surprising, I've found, is when one of your cats starts doing the same thing.

August 25th
Some big worries this week. Regardless: disheartened to see that M&S 'Fantastically Fizzy Fish' have been rebranded as mere 'Fizzy Fish'.

August 26th
Odd: Could swear I set a Google alert for "cat" but it seems I must have actually set one for "all the bad news about cats imaginable".

Starting to regret jeering at Janet for falling off banister earlier. Just spotted him walking towards golf bag, with distinct "wee face".

August 27th
Very behind on the sequel to Under The Paw. Have been reliably informed by friend that I'm putting my energy in wrong places. Think I understood. Made note: "Spend less time in Ipswich."

August 28th
I'm still not sure I can believe it myself, but I really did just use the term "flailing paws" in a warning note to my cleaner.

August 29th
The man who shouts "f***in come on then" at the local ducks hasn't sworn at ducks once this week. Have also noticed that the woman who works in the local Somerfield who looks like John Kerry no longer works in Somerfield. Admittedly, it took me a while to notice, but it's a blow, nonetheless. Is everyone who makes this town this town leaving? Next week: Bald David Crosbyish Tramp Who Stares At Lake departs for "new media post".

August 30th
Signs that another market town summer is ending: 1. The air is suddenly fresh. 2. Apples are falling. 3. The Bear is spending more time indoors. 4. Nobody kicked my car in last night.

September 1st
Just went to take a Nurofen. It's no exaggeration to say Janet's hyperthyroid pill was 2/3 of way to my mouth before I realised I had made a schoolboy error. In other cat news, a position seems to have been reached by committee on the new cat biscuits I bought on offer at Pets At Home yesterday. Committee tongue is alien, but position seems to be: "new cat biscuits taste like pig sp***"

Just realised must to go like the clappers to finish book by deadline. First of many obstacles: have no idea what "clappers" are.

(Later) Have now found out that clappers refers to the clappers on bells during the early 1940s. It seems there was rationing on not only food but similes during World War II.

September 3rd
Have cats "wholesome" catnip mouse, with no fur. Has been thoroughly rejected. Echoes of the time my mum tried to convince me halva was "as nice as chocolate". But with tables turned.

Sep 5th
Just reviewed Joanna Lumley's Northern Lights DVD. Hard not to warm to a celeb who a) loves cats and b) willingly lets you see her going to bed in a hat.

Found a note in my notebook saying, "Mouse. Local Conservative Club. Second wang!" Have absolutely no idea what it means.

Sep 6th
Out for a walk today in North Suffolk. Turned in opposite direction from sign saying 'Beccles Giant Duck Art Trail'. Have to confess: that took some discipline.

Sep 7th
Getting a very strong sense, once again, that my cats are not purring with me, but purring at me.

Sep 8th
Think there has been a significant household misunderstanding today. When I said "cats can be tw**s" I wasn't giving official permission.

Sep 9th
When trying to stop letting a cat in through doors, does going out to "tell him it's ok" to use the catflap still count as letting him in?

Sep 15th
Dear My Cats: when I enter a house, I do so with decorum and humility, not expecting congratulations. Out of respect for the fact that I let you live here, and conspire with you in the illusion that you own the place, you should do your best to follow my example. Wet paws and safe passage through a miniature door are not, and will not ever be, cause for fanfare. 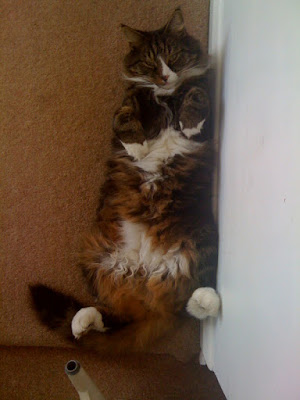 Labels: cats, diary, under the paw

this is completely brilliant - i haven't got under the paw yet must must MUST!!! (don't suppose you have any signed copies i could purchase - it's a thing i have....)

I have to say I Lol'd way too many times in that. Especially at the Chairmain Meow comment... gold :)

Im here in Australia and its 2:23am and my youngest the ever illustrious Dukieboy is meowing like its dinnertime wtf.

he's the sort of cat that wakes me up at 5am by standing about half a foot from my head and stairing at me while purring like a lawnmower cos his precious dry food bowl is empty... lol

Do you have any tips on getting cats to understand that while Frontline may smell nasty and feel a bit icky on the neck it should not really be the cause for the acute terror and mass panic it seems to provoke? Every month.
If so please could you put them on here or in the next book...
-Julie

I have an excellent recipe book for make-'em-yourself cat biscuits. NONE are pig-flavored, btw.

If your search brought up negative stuff on cats, USE ANOTHER SEARCH ENGINE. By all means!

your cat needs to meet mine!

i hope you're not actually behind on the Under the Paw sequel. some of us in our boring office cubicles who do have distinctly cat-themed lives are really looking forward to it.