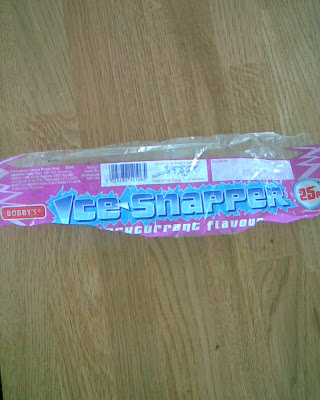 Name: Blackcurrant Flavour Ice Snapper
Place Of Origin: Bromsgrove
Tagline: "Do not refreeze!"
Estimated vintage: Best Before Date is 10.6.10... so probably about 1987, then.
Signs of attachment: None (dumped heartlessly in the hedge).
Weirdness rating: 5/10 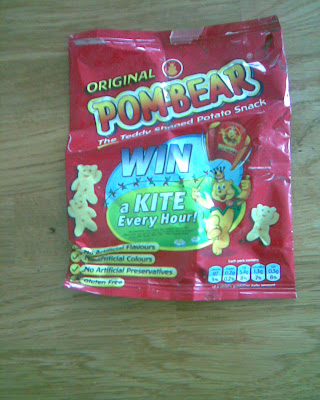 Name: Original Pom-Bear
Place Of Origin: Corby
Tagline: "The Teddy-Shaped Potato Snack!"
Vintage: 2003
Other vital information: "Pom-Bear is The King Of Bears (allegedly)... his fur is a rich golden yellow and is quite short, not at all shaggy or scruffy, but still wonderful to touch and he's great for cuddling."
Signs of attachment: Lots: carried by Janet up three flights of stairs, onto first floor balcony (which also would have entailed death-defying jump across four foot gap between balcony and conservatory roof with packet in mouth).
Weirdness rating: 6/10
Posted by Unknown at 01:29

Are there any other litter-fishing cats known of?

...and just think of what he DOESN'T bring home.

Thought you (and the "family") might like to know that yesterday I saw "Under the Paw" in a local book store. Yep! All the way Down Under, in lil ol' Mackay, Central Queensland coast.(The shop is a sort of antipodean W.H.Smith.)