Animals I Have Considered Stealing: Number 2 - George The Bat 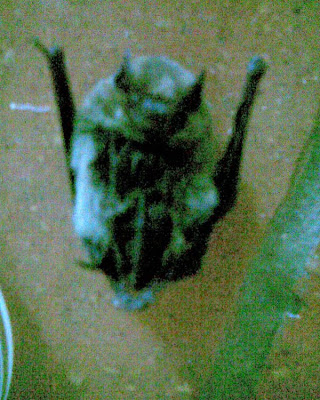 HOME: The Hellmouth, South Norfolk, UK (“Second left after the BP Station, you can’t miss it, if you see the electrical wholesalers on your right you’ve gone too far…”)

BRIEF CV: Brought in by Pablo last month and abandoned upside down near catflap, apparently unchewed, presumably on the grounds of being “one of them unlucky ghostmouses”. George looked a bit dead at first (see above pic), then began to silently scream at me, with a face even more expressive and strangely human than that of Gizmo from Gremlins, before flying up to perch on the ledge of the sliding doors in the living room. Here, he proceeded to make chuntering noises. These, while on first hearing easy to mistake for pure panic at being in an unfamiliar environment, soon came to feel like judgements cast down from on high: not just on Pablo, Shipley and Bootsy, all of whom were watching sceptically from below, but on me, my new brightly coloured t-shirt from the sale rack in H&M, and even, ultimately, the copy of ‘Frampton Comes Alive’ I had left out on the dining table. George was eventually captured in a ‘Golf: Violating The Rules Of Fashion For 300 Years’ novelty coffee mug and released gently back into the wild, but not before issuing a few more strident opinions, some of which could probably be simply translated to “Why are you putting me out in the rain? Do you not realize it interferes with my echo chamber? Have you learned nothing about my species in the 17 minutes we have known one another?” but in the end felt like somewhat Satanic pronouncements on the deepest me, and everything I had failed to become as a person.

PROS: Constant griping good for stamping out complacency, both personal and cat-based: "Are you going to be nice and shut up, Shipley, or do you want me to go and get the bat?”. Tremendous shoulder accoutrement of the “people might not notice it at first, but when they do they won’t stop talking about it” variety. Potentially awesome weapon to send through the bedroom windows of sleeping enemies on recondite ear-whispering missions.

CONS: Grumpiness. Guilt trips. Constant conversations of the “What’s wrong?” “Nothing…. I’m FINE” variety. Public appearances leading to misunderstandings with overzealous goths. Unresolved heartbreak over the
The People Sheep could get in way of Making A New Start.
Posted by Unknown at 01:50