Guest Writer's Cats Of The Week: Pushkin And Titus 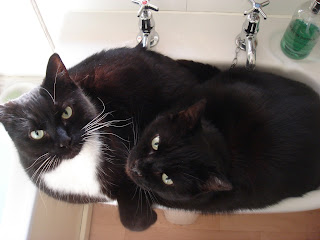 Names?
Pushkin (the Very Magnificent, obviously)
Titus – I've a modest ego, unlike some I could name…

Nicknames?
P:  Pushkin is a Very Magnificent literary name unlike Fatty Fish Breath or, for the purposes of Twitter, Cat.
T:  Gertie, I think it’s meant to be humorous. My social networking ‘handle’ is CB (for Cat’s Brother). Alas one cannot choose one’s relatives. I refuse to answer to ‘Oi’.

Theme Tune?
P:  Weapon of Choice – Fatboy Slim. Because I’m a lean, mean fighting machine.
T:  We are all made of stars – Moby. Because I am.

Age?
P:  In my prime - I have been in my prime for the past 9 years and I have many more years of my prime to come.
T: I am also in my prime only more so. It is self-evident and I don’t like to draw attention to it.

Owners?
P: The Invisible Woman, who writes in the Guardian about fashion and stuff for older women. She’s supposed to be writing a book and thinking about another one but she spends a lot of time looking out of the window and drinking coffee. I suppose she’s thinking…
T:  I find the ‘invisible’ thing confusing. I mean if she was I wouldn’t be able to sit on her, right?  But I think, therefore I am, so by extension the IW thinks because she writes and is therefore also ‘am’. She definitely has knees.

Brief Biography?
P:  We were were born on a farm in Leicestershire then one day, I think we were about 8 weeks old, The Invisible Woman visited. She tried to kidnap Titus but I wasn’t having any of it, not when I heard he’d be moving to London, so I kicked up and so did he. In the end she had to take us both. We live on the edge of Blackheath, which we both like enormously because of squirrels. It’s only 10 minutes from London Bridge and there’s so much to see and do!
T:  When was the last time you actually went out?
P:  Only the other day I went to the theatre – Pinter I think it was. A bit shouty but Rufus Sewell was awfully good.
T:  I think you’re confusing your diary with someone else’s…

Catchphrase?
P: ‘Psst! Cat here.’ It’s the way I let Twitter know it’s me and not The Invisible Woman so all my followers can get ready to be dazzled by my towering intellect.
T:  ‘Are you going to eat that?’ I can’t bear waste not when there are cats literally starving out there.

Favourite Habits?
P:  Sitting under houseplants waiting for leaves to drop off so I can play with them. Collecting the red rubber bands the postman leaves for me, and playing with them. Sleeping in doorways. Sleeping sideways and on my back in doorways. Sleeping in the washbasin. Sleeping. When I’m not sleeping I like pretending I’m an Arabian Leopard and drink water straight from the tap, like it’s a mountain stream, and I’m in the Arabian mountains chasing furry things and birds and stuff and because I’m an Arabian Leopard I can…. (Enough! – IW)
T:  I quite like watching the pigeons. Sometimes I can persuade Pushkin to give my ears a good clean and that’s, like, total blissikins. I enjoy scratching my chin on the corners of things – books, laptop, loo brush, cupboard doors and the fridge. If I can find a pile of freshly laundered bed linen somewhere I’ll climb up for a kip. The IW’s very good at leaving clean things out for me (I think she knows I like a bit of starch in my pillowcases). Oh, and the 7am catnip mouse delivery and wake up call (full feline aria, sung a capella).

What constitutes a perfect evening for you?
P:  A light supper followed by some A Grade top quality catnip. When I’m nicely fried I like to settle down on the sofa with The Invisible Woman and a box set of The Wire – although I usually fall asleep on my back and start snoring after about half an hour.
T:  Food, I love food. And biscuits. Catnip's not that exciting and I can take it or leave it, which is just as well because someone scarfs down more than enough for both of us. I used to enjoy a good horror flick but we don’t watch them anymore, not since we all watched Spielberg’s Poltergeist and it gave me ideas. Just for old times’ sake I might sit and stare at the wall for 10 minutes just to weird everyone out. Ah, happy days…

Favourite food?
P:  A nice bit of fresh chicken or tuna goes down very nicely. I don’t snack much [fact check please - IW] but I love the morning mystery biscuit hunt.
T:  Well, obviously I like to eat sensibly but if there’s one thing I go mad for, it’s cheese. If I can nick a bit of cave-aged Gruyere I’m well happy. Lately I’ve developed a taste for Ben & Jerry’s ice cream. I try to include a bit of roughage in my diet and chew the corners off the pelargonium by the front door but I’m afraid it disagrees with me. It’s a useful emetic though. For the full effect I need to eat some just before bedtime so I can wake at 3am for a good clear out before breakfast.

Defining moment of your life?
P: The Death Stare. The world is now my oyster. (Can I get Worcester sauce with that?)
T:  The discovery of Zen Buddhism. I practise daily.

Any enemies?
P:  I’m not wild about Reuben-Down-the-Road. I sometimes see the IW wantonly tickling his tummy in the street, in broad daylight! Reuben is a shameless apricot tart though so I suppose it’s not without provocation. The Dyson.
T:  The Dyson, the hairdryer and the doorbell. I’m cool with Reuben. We all need some love.

If you could do one thing to make the world a better place for felines what would it be?
P:  My super-power would be thumbs. Then I could open the fridge and feed myself. Sitting and staring at the door doesn’t help. Legalised catnip for all.
T:  No loud noises - so no Dysons, hairdryers or doorbells. I appreciate vets are a necessary evil but a warm thermometer would be nice.

If you could meet a celebrity who would it be and why?
P:  Eddie Izzard. And I would ask him to perform his Drilling Cat sketch just for me.
T:   Choupette (@ChoupettesDiary) who lives with Karl Lagerfeld. Not only is she a hot French feline but she also has her finger on the pulse of the very best fashion gossip.

Which one of the cats in Under The Paw and Talk To The Tail  would you most like to be stuck in a lift with?
P:  Janet. We’re both charismatic with a tremendous zest for life and boundless energy. While we’re waiting to be rescued we could play Wall of Death (Romper Stomper Rules).
T:  The Bear. It would be a meeting of minds because I too know the emotional pain of allergic fur loss. I have only to cough and a bit more falls off. 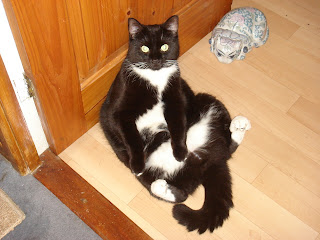 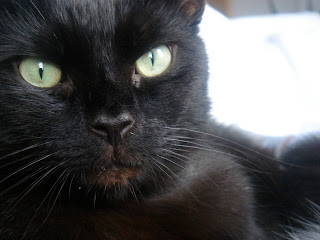