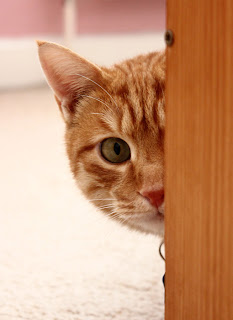 Name?
Milo - In my previous life I was known as Freckle, but Mum said you could tell my proper name was Milo, even in my photos from the refuge.

Nicknames?
Milo Fanta-Pants, Little Man, Smiley-Milo....and on one occasion that I rarely mention (because I'd done something a bit silly to provoke it) 'You Enormous Ginger Tit!'.

Theme Tune?
'Love Cats' by The Cure, which Mum sings to me frequently. Sometimes she also sings 'My, my, Myyyyy, my Milo' at me to the tune of 'Delilah'. It's horrendous. I have a special 'concerned look' that I use if I hear babies or animals sounding distressed on the TV. I use the same look when mum sings, which probably tells you all you need to know about her singing

Owners?
I live with my Mum, and her grown-up daughter. Mum says she is quite boring and doesn't like talking about herself much. My other human is a writer....or trying to be. She's very clever.

Brief biography?
I was handed in to an animal refuge in Cyprus as a tiny kitten, and I lived there with lots of my animal friends until last November, when I was two & a half. Then me and some of my friends flew in a big metal bird, from Larnaca to Heathrow, and went to stay in Nottingham with some nice foster-people while we were found 'forever homes'. It was a long journey, and I didn't really understand what was happening at the time. Mum saw a photo of me on Facebook and says she fell in love at first sight. Three weeks later, after a lot of form filling, emailing, and other boring stuff that I didn't really understand, I was bought all the way down the M1 from Nottingham to Essex to my new home. I loved it immediately, and within 45 mins I'd explored and was cuddling my new Mum, and purring lots.

Catchphrase?
'What are you doing?? Can I watch?'

Favourite Habits?
Stealing people's seat when they get up to make tea/use the loo, then looking all innocent when they come back, like I'd been there all along, playing ball up and down the stairs at 5.30am, then hiding the same balls under the bedroom furniture, so Mum has to get on the floor & hook them out with a coathanger. (While she does this I sit on her head and purr.) Shouting at that snow stuff  through the windows, and drinking out of people's mugs or glasses while they're not looking.
Also, I like to watch things. Anything really, I'm not fussy, just very curious. I like watching mum wash up (the bubbles fascinate me, but I'm scared of them too) and I like watching her make things, on the sewing machine. She says I get too close to the scissors when she's cutting the fabric, and that I'll look pretty silly with only half a set of whiskers, but I know what I'm doing. I like jumping up on high things, wardrobes, doors, bookcases.... I like to get a different perspective on things sometimes, and explore new things. ( I found a ridiculous chair the other day, has a big hole in the seat!) I also love wildlife documentaries, especially ones with birds in them. They look pretty big on the TV but I'm confident I could catch them if only the stupid glass wasn't in the way. Oh, and licking people's noses when I have terrible cat-food breath. They pretend to protest, but I know they love it really. 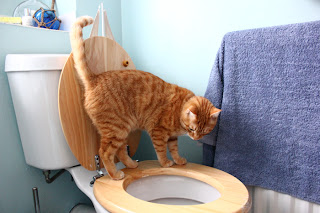 What constitutes a perfect evening for you?
Snuggling with one of my humans on the sofa. I love to be snuggled up tight, with my nose buried in tiny corners, in armpits, behind cushions etc. Mum says I must have some sort of invisible snorkel to be able to breathe, but I'm just comfy like that. Then after my snuggles, a nice bit of tuna before bed, a quick game of 'stair football'  while Mum's taking her daytime fur off and getting her night-time fur on, then I snuggle on the bed with her all night. when it's really cold, and that infernal white stuff falls down, I sneak under the duvet and sleep. Mum woke up to find me laying next to her with my front paws round her neck the other morning. It was a cuddle, honestly; I wasn't trying to strangle her.

Favourite food?
Tuna, with occasional morsels of Kentucky Fried Chicken if anyone has any they don't want. Gotta love those herbs and spices. I like tomato ketchup too, Which Mum found surprising. Anyone would think she'd never seen a cat eat ketchup before.

Defining moment of your life?
Arriving at my forever home, definitely. The whole emigrating process was a bit bewildering, but I knew it had to be for a reason....and arriving here was it. I totally love my new home, and my new people, and I try to show them as often as possible, even if they are trying to type emails, knit, cook, sleep... doesn't matter, I have to let them know!! They love me too, I can tell. It's so wonderful to feel so loved, and have a proper home. I know not all cats are as lucky as I've been, which makes me a bit sad....but grateful at the same time.

Any enemies?
The big grey Wooooh monster. I think it's called a hoover. I'm getting used to it, but I'm not sure we'll ever be best friends. Cars are a bit scary too, I didn't see many in Cyprus because I lived in the country, but there are lots here. I watch them through the windows, but they're a bit big and noisy for my liking

If you could do one thing to make the world a better place for felines what would it be?
I'd make sure that everyone got their cats neutered, so there weren't so many unwanted kittens, and tell everyone to adopt all the homeless animals from shelters etc. They all deserve a good home like I found. I also think tuna for breakfast should be made law, although the ketchup could be optional. Also, somebody needs to make computers easier for cats to use. We're all over Twitter, and the internet generally, and we have to get the humans to do our typing for us. I tried to send my own tweet a few weeks ago, but only succeeded in sending one of the laptop keys flying across the room. It's a real problem, and somebody should fix it soon!

If you could meet a celebrity who would it be and why?
I'm not sure I'd be very good with celebrities. I can't imagine they'd be into the whole nose-licking thing, and I wouldn't want to cause offence. Besides, I rather like being the centre of attention myself, I wouldn't want anyone stealing my thunder.

Which one of the cats in Under The Paw and Talk To The Tail  would you like to be stuck in a lift with?
I love The Bear, he has so many things he's sad about, and I'm quite cheerful, so I'd like to try and reassure him that things aren't so bad after all. But then again, Ralph is totally awesome too, and I'd love to compare notes with him on always managing to look so pleased with oneself. (Mum says I do that too.) Maybe we could all get stuck in a very big lift and have a party? 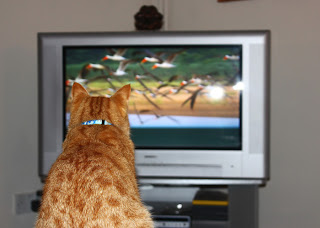 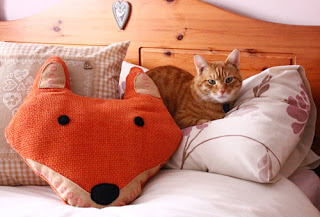 Dearest Milo, have a wonderful birthday with your two mums! Many happy returns

Happy birthday dearest Milo! Have a wonderful day with your two mums!