Guest Reader's Cats Of The Week: Mai And Smoke 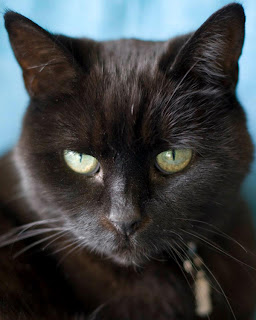 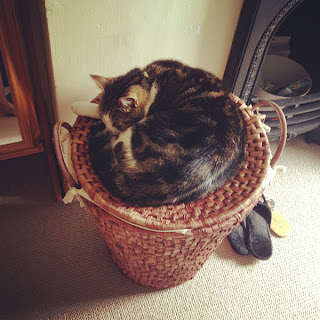 Mai (the black one) and Smoke (the tabby one). Mai will be doing the talking, as Smoke is somewhat intellectually challenged.

Now that I’m getting older, I often get called Mabel or sometimes even Maybellene. They called the other one The Boy, The Boo, Smokie-Boo or sometimes Smokie-Bollocks (apparently on account of his lack of them).

Well, mine is quite obviously Maybelline by Chuck Berry. Although Jo (one of my willing slaves) likes to change the lyrics to sing, ‘Oh Maybelline, you are my black cat’ and other amusing ditties. Smoke tells me that his is I ran so far away by A Flock of Seagulls. Mainly because he spends most of his time running away from things…his shadow, any slight noises, Jo trying to take nice pictures of him…you get the picture.

I’m terribly sorry, but I really don’t understand that question? If you mean whom do I own, then I currently have two quite well trained slaves at my disposal. Jo is a photographer and writer and Phil works for an independent fostering agency, and writes a bit on the side.

Phil got my brother and I from the parents of a friend when he was at university in Bradford. Very sadly, my brother Alaska died aged 6 from kidney failure and once I’d recovered from the upset, I began to quite enjoy being an only cat. But then Phil decided to keep trying to bring in new cats to keep me company. He didn’t have much luck – Mr Blue sadly died too, and then Newbie ran off after I gave him a stern hiss or twenty. Unfortunately, Smoke seems rather too keen on sticking around; despite my best efforts to ‘accidentally’ push him off the stairs. He came from The Society for Abandoned Animals in Stretford, Manchester. Phil says that he was absolutely desperate for attention, and made himself the obvious choice. No decorum, that cat.

Like The Bear, we are both also the cats of a broken marriage, but we’re both very happy with our new slave, Jo because she works from home and is always around to attend to us. She’s been around for a while now and tells me that she and Phil are getting married in the summer. I’m still deciding what to wear.

‘To love oneself is the beginning of a life-long romance’ – Oscar Wilde. I’m fully versed in this, and encourage all those who meet me to feel the same way about…well…me, of course. Smoke’s catchphrase is undoubtedly a traumatised sounding ‘meep’. He’s permanently one paw away from a full on existential crisis.

Smoke’s favourite habits are trying to avoid the aforementioned existential crisis, tripping people up on the stairs, going out in the rain at 2am and then jumping on the bed and crying until someone wakes up and dries him with a towel.

I like to start the evening with a little light supper, although I’m extremely fussy about my dry food these days and will only deign to eat it if it’s had a light sprinkling of water on top. If this isn’t forthcoming, I just sit in front of the slaves and yell at them continuously until they rectify the situation. I’m quite proud of how long I can yell for without taking a breath. Then I retire back to bed for a light nap, before coming downstairs for a slightly lighter nap on Jo’s knee. Finally, I take up my position as ‘chaperone cat’, sleeping in-between Jo and Phil to prevent any funny business. And if it’s particularly cold, I like to get under the covers and snuggle up against Jo, meaning that she has to lie rigid for hours in one position. It’s good to keep your slaves under control with simple methods like this.

The boy likes to spend his evenings outside, trying (and thankfully usually failing) to bring in live mice. On the odd occasion he does succeed though, he provides good exercise for Phil, who likes to run around after the mouse with a plastic bag. Most fun to watch! If it’s cold, he tends to stay inside, making a lot of noise and jumping all over the sofa. Sometimes it’s hard living with such a simple creature.

Raw chicken and grated cheddar cheese. Smoke likes any meat and will dance on his hind legs to get at it. No dignity, that boy.

Apart from finding my forever home, I think my defining moment was discovering murder as my lifestyle choice. I’ll say no more on the subject, but that boy had better watch his back.

Like one of your other recent guest bloggers, I really can’t stand the hoover. Jo seems to agree with me, but Phil seems to have an obsession with the thing – it comes out at least once a week. Far too often in my opinion!

Smoke has running battles with most of the other local cats, and often gets chased indoors from the back garden. He then immediately jumps on the windowsill by the front garden to ‘see off the intruder’.

Ask people to always consider adopting a cat from a rescue centre, as there are so many in need of a home. Particularly black cats like myself, as apparently they are the least adopted colour. Which is such a shame, because we are the most affectionate of moggies.

Blofeld’s cat from James Bond. I think we’d have some interesting plans to make for world domination. Smoke says that he’d like to Sigmund Freud as he’s got some issues with his mother that he’d like to resolve.

Which one of the cats in Under The Paw and Talk To The Tail  would you like to be stuck in a lift with?

It would have to be The Bear for me, as he is my male twin after all. Smoke says that he’d just like to meet all of the cats, in the hope that one of them will be nicer to him than I am. 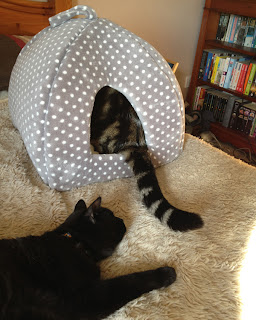 Visit Mai and Smoke's human's website.
Posted by Unknown at 06:35

Lol my Bob dances for food