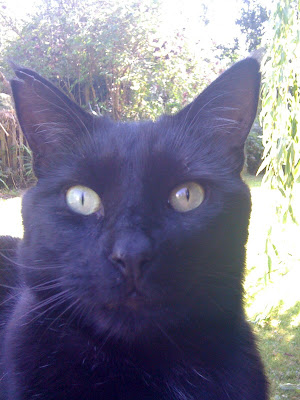 1. The casual racism (according to The Bear) of the feline internet community, including the dialogue of the two famous talking youtube cats and people who mistake Shipley (pictured above) for The Bear "just cos he is black".

2. The continuing closure of my boiler room door, preventing Ralph scoping the hole in the wall where he lost his all-time best mouse in July, 2004.

3. Janet's new pretentious, out of date neck-based soul patch, as sculpted by the vet in what he claimed was a "blood test".

4. The two cat calendars currently outselling Under The Paw in the amazon cat chart THREE MONTHS BEFORE ANYONE REALLY NEEDS THEM.

6. Me tweeting six times in a row about Whitesnake in 3 minutes on Twitter and immediately losing 11 followers, one of whom, if I had stuck to the appropriate subject of CATS and not 1980s hair metal, might, if I was really lucky, have borrowed Under The Paw from the library on a whim, and then recommended it to three of their friends, one of whom might, in three months, if I was even more lucky, have bought it in a three-for-two offer at a lower rent bookstore, earning me a royalty of around 37 pence (minus agent fee), thus contributing towards the purchasing of Sheba Tender Terrine With Chicken And Turkey.

7. James Wellbeloved Natural Cat Food Biscuits, and any other biscuits recently purchased "not from the heart" (i.e. only due to being on offer at Pets At Home).

8. The rather lame use of the word "hobo", instead of the better-known, and generally more shaggable, "drifter", in the original 1982 version of Whitesnake's 'Here I Go Again'.

9. Pretty much everything else about the original 1982 version of Whitesnake's 'Here I Go Again'. 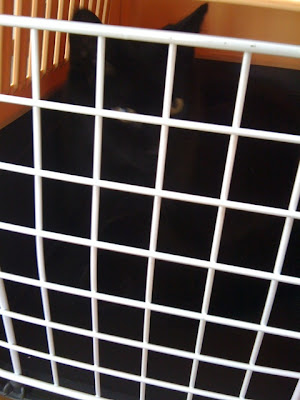 I feel for Janet, being subjected to a soul patch that mocks his dignity, and everyone should regard racism against black cats with disdain, but he's being excessively catly to disdain food simply cos it was bought on special - that's like asking the price of a birthday present - bad form, Janet!

I said sorry Shipley! I was going by the tatty ears and not 'jus coz you iz black' I can see now that you have much more refined looks than The Bear (Salmon in the post). And don't dis the 'snake maan!

It is a well-known fact that cats can read barcodes and therefor know exactly the price of every can of catfood. The well-known "huh - I don't think so" sniffed by many cats on seeing what is for dinner is a result of their estimate of tonight's dinner's value on the open cat market.

1. Totally agree with greenspace.
2. Am thoughtful about Linz
3. Am being educated by Kathy
4. Am still a huge fan of Janet's, no matter WHAT his servant listens to

I have a theory about Whitesnake. That boys who liked their music were secretly only into it because of Tawny Kitaen and her writhing about on car bonnets. Discuss!

my cat-mad colleague mel slipped on a banana peel outside a whitesnake concert in the early 80s. True story. (and possibly the best story i've heard in aaaaaages)