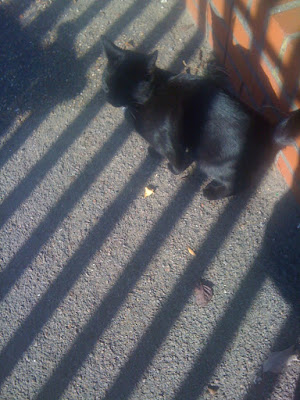 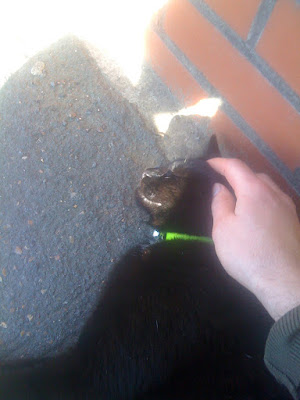 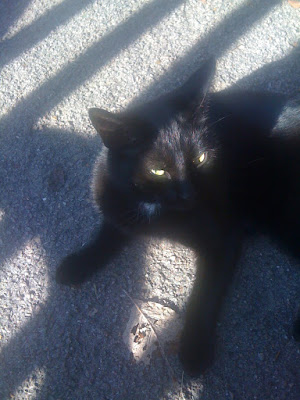 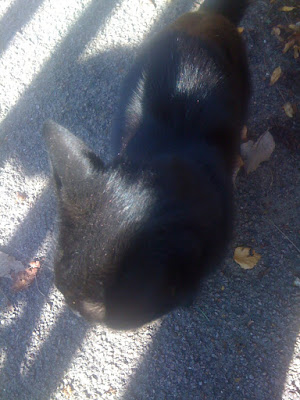 Not long ago, I linked to The Random Cat Project, a site which seems to be from going to strength to strength at the moment, with random cat encounters from around the world flooding in. I had my own random cat encounter yesterday morning, meeting near my local train station the ineffably sweet black mogger pictured above, who immediately latched on to me and brought to mind a female (I originally typed "feline" there - perhaps a Freudian measure of the fact that I don't really think of Shipley as feline, more like halfway between canine and whatever the "ine" word is for crocodiles*) less obnoxious version of Shipley.
To be honest, I was having a very up and down kind of morning at the time: the sun was shining, and I'd just finished the most lively and good-natured of radio interviews, and been given a guided tour of an exciting new bookshop opening next week in Norwich, but I was also worrying about a very poorly close relative, pondering my still slightly bewildering singleness, and had just had a phone conversation with another close relative who'd been having the most testing of days. There's a split school of thought on the black cat crossing your path: in Britain and Japan, it's considered lucky, but in America and most of Europe, it's thought to be a bad sign. But I can't think how anyone, happening across She-Shipley, could have construed her presence in any negative way. Three minutes of nuggins (see the Under The Paw Cat Dictionary) was enough to make me feel instantly better about the world and a great example of the way cats can soothe our ills. Naturally, I felt a bit self-conscious, crouched down on such a public thoroughfare, and as She-Shipley meowed demandingly at me, I spotted, out the corner of my eye, a large goth teenager coming down the path to the station, dressed in all-black: long sulky fringe, arcane bits of metal hanging off his jeans, impractically warm trenchcoat.
I have to admit that there was a similarly teenage part of me, the part trained forever by my not rampantly violent, not massively small-minded and not at all incredibly homophobic North Nottinghamshire secondary school, that thought "Oooh shit, he's going to call me a puff and knee me in the ear as he walks past, isn't he?" but then I came to my senses, remembered I was 34, and very much my own boss, and that if I wanted to stop and stroke a random cat on the street, I was very much allowed to, and anyone who didn't like it could quite frankly cock off. The teenager glanced across at me as he passed, and down at She-Shipley, and as he did, we exchanged a glance, and I watched his default sulk crack into a wide, unguarded smile, with not a trace of mocking in it. If I experience a more pleasant moment of human interaction than that this month, I'll be very, very happy.
* I just looked it up, and the "ine" word for crocodiles is "crocine".**
** That was a lie. 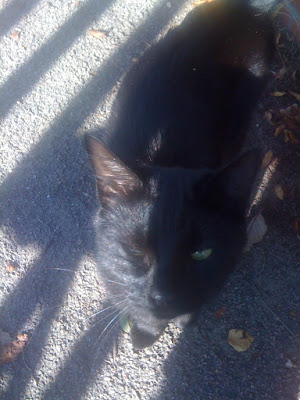 I do love how a cat encounter can change your entire day. What a sweet story!

Goths are so media-maligned. Speaking as somebody who, at 38, is too old to still be one and yet sort of, well, is - if ANY subcultural type is likely to smile at random friendly cat interaction, it's a goth. Beautiful kitty, by the way.

Natalie: you're right. The goths in my Lost Tribes Of Pop book are big cat fans...http://www.myspace.com/old_school_goth

Good thing our momma didn't meet that kitty because she would have grabbed it and took it home cuz she thinks that all kitties should be inside kitties.

But having said that, I have to admit to envying you your Black Magic Encounter. That is one fine feline!!! I would have scooped her up in a nanosecond and installed her in our Guest Room. (Oops, she has a collar on! You have never seen the above comment and do not know where it emanated from.;) )

Interesting. Those people scare me. Nice to know one of them is hooman!

That's not the least bit "wet", it was lovely. It's nice how encounters, both furry & gothic, can make things a little better.

What a nice encounter from both the kitty and the goth kid. It must be black magic indeed!

what a little cutie, looks like she's smiling in the second pic down.