You've Got A Friend (And Just Because He Is A Mouse, That Is No Reason To Be Ashamed) 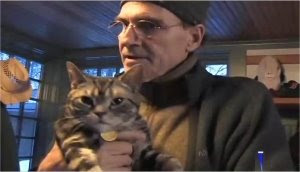 I was very interested to get an email forwarded to me the other day by Under The Paw reader Helen, with a link to a video from the website of the super laid-back singer-songwriter James Taylor. This can be seen here and is probably a better insight into what former seventies pop scenesters do with their free time than any number of VH1 documentaries: first Taylor builds a mouse trap with a tin can, some wood, and an almond embedded in peanut butter. He then promises to take us to "Mouse Heaven", which sounds kind of macabre coming from a garage-dwelling Taylor, particularly when you take into account his headwear, but actually turns out to be a special cabinet where he keeps Evander, a mouse he rescued earlier from his cat, Ray, who is clearly still holding a major grudge about the whole unjust episode.

I'm not convinced that Evander - so named because he has a hole in his ear - actually likes the small ball Taylor has made for him to roll around on the floor in, but the video is ultimately as sweet and gently thoughtful as it is odd. When Taylor talks about his next mouse sitting in his DIY trap and "thinking about what he's done", you realise: this is a guy who could never have been in Aerosmith. It all slightly reminds me of the time I had to interview the pre-punk childman rocker Jonathan Richman, and came armed with forty odd questions about his enormous back catalogue, only to find that all Richman wanted to talk about was his newfound interest in cement.

Taylor also has a video where he demonstrates Ray's special catladder.
Posted by Unknown at 11:27

Like my late, lamented uncle used to say: "Ever'body gotta be somewhere." ;)
Bless Sweet Baby James for loving his cat. AND Evander.

Wow, you got to meet/interview Jonathan Richman.....one of my all time favorite albums is J Richman goes Country, which I gave away in a spontaneously [drunken] generous moment and havnt been able to acquire since...but cement???

I love Ray. I think he has his own fan club now.

Hey we could all do with a little Evander to amuse our cats but it looks rather stressful for Evander though having Ray watching his every move.

I fancy having James Taylor in a tank in my garage to amuse me!!! Great singer - great guy.

Well, finding this made my Thursday night...I wanna be JT's cat!