Under A Bigger Paw 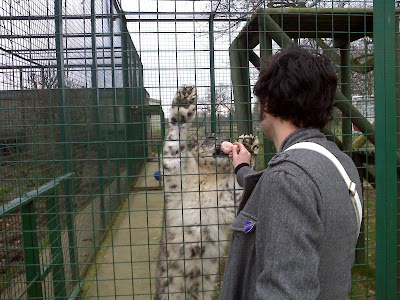 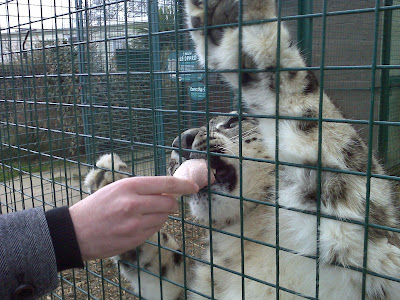 The week before last, I committed what my cats would probably consider the ultimate act of betrayal by taking a trip to Kent to The Wildlife Heritage Foundation, having been very kindly invited to have a look around by the UK's number one cat behavourist, Vicky Halls. Vicky has been extending her cat counselling repertoire recently by working with Ronja, a depressed, lame, agoraphobic female tiger originally from a German zoo, who's been living at WHF since 2004. Ronja didn't precisely seem overjoyed to see me, but is responding well to the toys and treatments that Vicky has suggested for her, which include extra-strength catnip and spare copies of the Yellow Pages*, which she rips up with her teeth in much the same way that Shipley does with my favourite paperbacks and draft manuscripts.

Since big cats don't meow or purr (although they do something vaguely similar to the latter, which WHF's keepers call "chuffling"), I found the idea that they would go loopy over catnip surprising at first, but less so the longer I spent at WHF. In the movements of the snow leopards, leopards, tigers, lynxes and cheetahs I met, I observed at the lazy swagger of my own cats, writ large. Although I was a bit nervous about putting my hand through the bars and feeding them chicken drumsticks initially, I soon became lulled into what was undoubtedly a false sense of security. Never was this more extreme than in the presence of the Pallas Cats, who, though ostensibly similar to my tabby narcissist, Ralph, would no doubt be more than happy to mess you up, ghetto-style, given half a chance. It was somewhat easier to stay circumspect around the snow leopards, Artur and Artem, whose paws are the size of Ralph's head, and whose tails work as in-built draft excluders (for warehouse fire doors, presumably). I'm glad that Vicky took the photos above, because I can put them on Facebook and make out to my friends that I'm really brave, but what they don't tell you is just how quickly my arm shot backwards 0.00001 of a second after Artem bit the chicken out of my hand.

I also got a peek inside "the dead shed", whose contents probably would have shocked me more were I not currently in the odd position of storing some horse's skulls on the balcony of my house for a family friend (more about this to come in the currently-in-progress sequel to Under The Paw). I've always thought of myself as the most squeamish of people, but I think after a few more hours at WHF, the site of blood, guts and dead rabbits would probably quickly become as quotidian as that of a freshly opened pouch of Felix. Having said this, I did wince a little when the volunteer keeper, Sarah, told me the story about one of the lions being semi-castrated in a fight. Apparently the claw went "all the way through". You could be the most rough and tumble, lion-cuddling outdoorsman, and you'd still find it hard not to suppress a shiver at that.

* It's good to know someone has some use for them these days.

Contribute to a vital cause:

Call Of The Wild: A Big Cat-Themed Song For Charity By Under The Paw Reader Paul Oakley.

The Snow Leopard Trust.
Posted by Unknown at 00:59

Right you are! That's why SANE societies (unlike the one I exist in) prohibit private keepership of big, wild, and exotic felidae. Very grateful to all the GOOD sanctuaries out there who help the big cats out. Their lot in life is generally a nightmarish one.

what an amazing experience, you're so lucky! I'm always a little bit astounded at how big cats are so similar to my cat in their movements/attitudes etc. I'm sure if Squeaky was 50 times bigger he'd probably eat me.

I've been to WHF, it was the best birthday present EVER, and I have pics just like those of me feeding a snow leopard - as well as others :)