Guest Cat Of The Month For April: Nikki 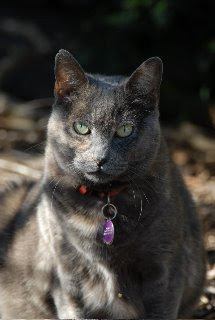 What constitutes a perfect evening for you?
It's called "Tooty Time". It's when my mom and dad sit
me down on the couch on my custom knit blanket and
scratch my head until my eyes begin to cross and I
start to drool.

Favourite food?
I have a varied palette, but if I must choose, a good
piece of raw or cooked fish goes down the hatch
quite nicely.

Defining moment of your life?
The day I assumed control of the house and its inhabitants.

Any enemies?
Other cats. I know the expected answer is dogs. As unlikely as it seems, I actually quite like dogs
and will tolerate their presence.

If you could meet a celebrity who would it be and why?
Ricky Gervais, because his comic delivery is without flaw.

Which one of the cats in Under The Paw would you like to be stuck in a lift with?
Ooh, that's a tough one. Hhhhmmm...The Bear would
make for some interesting conversation, Pablo probably
wouldn't say much. Shipley may beat me up, Janet may
sit on my head, I have a crush on Ralph, so that’s definitely
out, Bootsy is well Bootsy... As I enjoy a good challenge,
I'm going to have to say The Bear.

Biography?
I was born in Santa Cruz, California. My mom
acquired me while she was browsing in a 2nd hand shop
and some girl came in offering me up to anyone who would
take me. I was small enough to fit in the palm of a hand
(albeit a big hand, a hand nonetheless...). Life was good living by the ocean, although I never did
get to the beach. I lived there for many years sharing my
abode with another cat called Druid (mom misses her a lot!)
and a couple of big rambunctious dogs, and a family of (wild) Raccoons. Life took a turn when my mom moved to Los Angeles then Australia and I had to go live with her friend in the Santa Cruz hills. I was there for 4 years. I call that my silent period. I lost one of my fangs and my mom doesn't know how it happened and I can't talk about it. Well, 4 years later she came and got me. They took me back to Australia and now I have a huge back yard to myself. Well, actually I share it with a dog called "The Nudge", his real name is Cisco. His a goofy pest, but I tolerate him and his occasional kisses.My mom says I’ve always been a “love” and a “good girl”, not sure what that means, but whatever it is I reap the rewards! 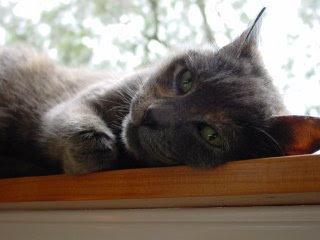 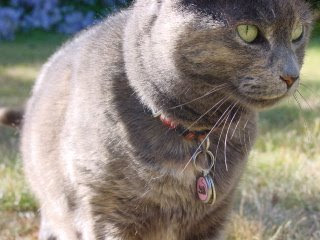 Nikki, you have style and panache as befits a world catizen. Our beloved Nikki left us last year and I appreciate meeting another Nikki. Long may you purr!