So you've (hopefully) bought your copy of Under The Paw, but you're still looking for some moggy-themed reads for your nearest and dearest, and you fancy going a bit beyond the usual cat-lit canon and the gift book table at your local branch of Borders. What do you do? If it's something a bit different and a bit special that you desire, you could do far worse than begin by investigating the three titles below....

Ernie: A Photographer's Memoir by Tony Mendoza.
My favourite cat book ever. Ernie was the ultimate tough guy New York cat, and Mendoza's pictures of him capture the essence of the feline spirit like nothing else. I gaze at these expressive photos, which document the full gamut of streetmog experience, at least once a week, and not just because Ernie is my kind of cat (big nose, black - well, more grey, really - and white, lots of cattitude). I wrote some more about him here.


Why Cats Paint: A Theory Of Feline Aesthetics by Heather Busch and Burton Silver (who also wrote the equally marvellous Dancing With Cats).
Ever wondered what is about Van Gogh's Sunflowers that gets your tabby's creative juices flowing? Or what the patterns your cat leaves in your litter tray really mean? Read this, and meet Minnie, the furry white abstract expressionist easing herself back to the easel after a creative hiatus following poor reviews, and Smokey, the romantic ruralist who tells his owner where to leave his paints by marking the spot with urine. An art world spoof to rank right up there with William Boyd's Nate Tate: American Artist.

The Sophisticated Cat: A Gathering Of Stories, Poems and Miscellaneous Writings About Cats edited by Joyce Carol Oates.
Peerless collection of cat-themed writings which Oates, remarkably, found time in her 167-Great-American-novels-per-year schedule to edit. Includes PG's Wodehouse's wonderful The Story Of Webster, as quoted in Under The Paw, and prose and verse by many other masters whose penchant for the whiskery kind you might not have suspected (e.g. John Updike, who I'd always pegged as a die-hard Dog Man). 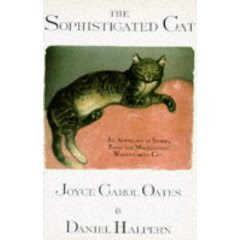 What about "Dewey" the library cat from Spencer, Iowa? I just read it and it's a great story. A perfect cat lover's christmas gift.

Oh my goodness! I LOVED Dewey!!! That was the best book I've read in a long time.

Such a touching story... I didn't want it to end!

I recommend every cat lover read it. :)