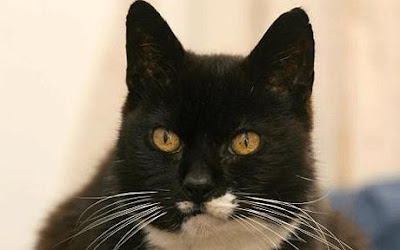 Earlier this year I read an excellent novel called The Confessions Of Max Tivoli, by Andrew Sean Greer. Tivoli is the victim (or should that be beneficiary?) of a rare syndrome which causes him to age backwards: he's physically more or less an old man when he's born, but by the time he's in his sixties, he has the appearance of a little boy, although coupled with the standard wisdom of anyone else in early old age. It turns out to be a clever way for Tivoli to address that eternal "If I knew what I knew now and had a young person's body!" conundrum, but, as is so often the case with dark, intellectual matters, it also got me thinking about The Bear. It is entirely possible he might be suffering from the cat equivalent of TIvoli's condition. When I met him, way back in the autumn of 2000, he looked positively geriatric, but he seems - with the exception of a few flea allergy-based hiccups - increasingly pristine as time goes on. Dee's not very good with dates, but she's fairly sure she got him in 1995, as a kitten, which puts him somewhere in the middle of his fourteenth year. People tell me this is "a good age" for a cat. When they say this, they don't mean that thirteen is the age when a cat comes into his own, consolidates his finances, finally gets to drive the automobile that becomes him, and learns to be comfortable with his foibles; they mean that he'd done well to get to that age. Quite frankly, this terrifies me, as I fully expect The Bear - a cat who has already shown astonishing durability in using up approximately forty three of his nine lives - to be on this planet for at least another three decades.

There seems to be a great divide of opinion regarding cat life expectancy, and it's a topic that fascinates me: some cats seem rickety and exhausted when they are eleven, others seem like they're such warming up for the true moggy action when they're sixteen. Yesterday, I read a news article about the world's current oldest cat, Mischief (pictured above), who's 27. He appears remarkably fresh-faced, although I wouldn't put it past the Telegraph to have used a backdated shot of him (after all, they were still using a byline shot of me taken in spring 2001 as late as autumn 2006).

I suppose 27 could be seen as just a few limping, blind, farting years on from the age that my uncle's cat, Black'Un, lived to (21), but then I started thinking about what I was actually doing in 1981, when Mischief was born*, and I started to get a true sense of just how long he'd been around. This prompted me to do some more research on old cats, and led me to various DIY youtube tributes to heroically longlasting moggies, which is not the kind of thing any animal-lover should do late on a Thursday night, whilst feeling tired and not particularly emotionally resilient (the croaky meow on the end of this one really killed me - don't watch it unless you're feeling strong, or at least make sure you watch Maru to cheer you up afterwards), after a day featuring an unexpectedly large workload. It also led me to Creme Puff.

Creme Puff, who died at the age of 38 years and 3 days, was the oldest cat ever. On her wikipedia page, it says that there have also "been reports of cats living well into their forties, however this is rarely proven, and is considered extremely unlikely", which is the equivalent of if the people who wrote the wikipedia page for the world's biggest beanstalk had decided to add "oh, and there was also this really, really massive one that led up into the clouds to a giant's house where there were gold coins and stuff, but most people think that's just, like, bullcrap." To speculate about a cat older than Creme Puff seems downright greedy. I mean, even I'm not 38 yet, and I own three pairs of Totes Toasties.

If you'd spoken to Creme Puff not long before her death, in 2005, and she'd been able to speak back, she would have been able to tell you about a world before The Manson murders, a world before Led Zeppelin, a world before The Three Day Week, a world when the JML pet mitt and the happy paws bungalow were nothing more than the wild dreams of some crazy-haired feline science fiction writer. There's a video which includes actual footage of her here. I consider this a bit of a find, not just because at the time of writing it's only had 491 views, but also because Creme Puff's owner, Jake, has the amazing distinction of having been the owner of not one but two of the oldest cats ever - a vet speculates that the secret to the longevity of Jake's pets might be the fact that Jake feeds them "bacon, eggs, broccoli and coffee" every morning - and may be the ultimate Cat Man, complete with tragic backstory. He also has a cat called Red Dog, which is the best cat name I've heard this year. I especially like the bit where Jake talks about having adopted "over five hundred cats" from the local shelter in his casual, Texan way, sort of like he's talking about how many times he's bought cigarettes from his local 7-11.

*In the main: trying to build my own space rocket from a piece of balsa wood and a loose plank from the garage roof, and striving to coerce a neighbour's tabby to "make friends" with my first cat, Felix.
Posted by Unknown at 00:57

Wow - it cheers me up to know that Jake Perry is out there. He's out there alright. But Gawd Bless 'im!

I want his breakfast recipe. How much coffee? And does he mix it in with the bacon, eggs and broccoli??

Just as an aside, the reason that many cats look worn out at about age eleven is that it's an age when serious illnesses tend to hit - lymphoma is a common one and thyroid issues crop up often at that age, but unlike the former, are treatable. Too often owners just put it down to the cat being old. Eleven is not old.

A few years ago there was a 31 year old cat living in the Forest of Dean with her owner. It was reported on HTV Wales news. The cat looked well and happy. We think she may have lived in the same town Dennis Potter lived in.

Jake Perry is an angel here on earth...bless the old coot as my gramma used to say. My mom's cat lived to be 22, he was a feral that found us and didn't live inside until he was about 14 and decided he didn't like sleeping in the old dog house in the cold. My Zippy is going to be 12 in a few months and she acts like a kitten, she's as crazy as a kitten too! Her favorite snack is extra sharp white cheddar cheese, maybe that's what's kept her young.

Wow, 38 is a wonderful age for a cat to reach! Roxy will be happy to know that eating broccoli keeps you young.

When I was a baby (in 1983) we had a cat who lived to be 21 (he died in about '83 so was born in about 1962) and he was the size of a small dog, there are pics of me as a baby with this giant cat (called Ginger), clearly he was a nice cat as my parents did not seem to mind leaving their only (at that time) kid with this enormous cat. Apparently I loved him and was always patting him....If his longevity was due to his massive size I have high hopes for Squeaky!