The Bear and Biscuit's Last Goodbye 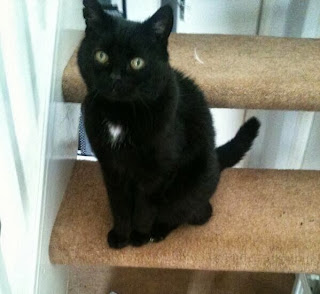 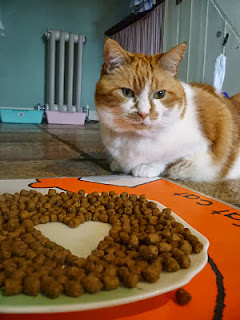 I'm moving house tomorrow. This means that The Bear, my oldest cat, will be parted forever from his unrequited Last Of The Summer Wine love interest, Biscuit. As those who've read my cat books will know, Biscuit is the Nora Batty to The Bear's Compo: a grumpy elderly lady cat owned by my nextdoor neighbours, Deborah and David, who doesn't suffer fools gladly, and who, for many years, The Bear has unsuccessfully attempted to woo, mostly by staring mournfully at her with his nose pressed up against nextdoor's kitchen window. The other day, I received the following message from David:

"I just went downstairs, as Biscuit was making a racket. The Bear, who we haven't seen for weeks, was on the other side of the window, clearly making one last heroic effort to say his goodbyes. I got there just in time to see him forlornly slope off as the one true love of his life scratched disdainfully from the other side of the window pane, and with a flick of her paw, dismissed him for possibly the last time."

Poor old Bear, does not deserve that, poor old boy, no one can get anymore melancholy. Hide your Celine Dione and Morrissey,

That is the saddest goodbye! Poor The Bear. Please pass on a special smooch & cuddle from me. Only after tomorrow will Biscuit realise exactly what she has lost.

She may be cute as a button, but she has shown that she is not worthy! *sigh*

And like Norah Batty, she won't realise that she really likes The Bear until he has gone for good, I will miss the Upside Down house ~(even though I have never actually been there!). Have a good move and I hope the Bear manages to cope.

That is Biscuit's loss, not yours, The Bear.

Hope all goes well with the move for everyone. There are a lot of people thinking about you all.

Please let us know that you have all arrived safe and sound. Tell the bear there will be other loves for him and biscuit even though it may not felel like it now. Litter trays and oil of rose for your nerves at the ready.

Please let us know that you have ALL arrived safe and sound. Tell the bear that it's always hardest for those left behind but i m sue biscuit will be fine and go on to find another love.

Yes, please keep us updated. I'm worried about The Bear... :(

Wishing The Bear, Ralph, Shipley, Roscoe and their fabulous manservant, Tom all the best in their new home.

I hope the move went well and that The Bear, Ralph, Shipley and Roscoe are all enjoying investigating their new home. Hope the move wasn't too stressful for the two-legged residents.
I've just finished reading 'The good, the bad and the furry'. I didn't want it to end. Please tell me there will be a new book, recounting the adventures in the new house.
And please give The Bear a very special cuddle from me.
Love and best wishes,
Allison
xx

Good luck with the move. Hope you and the cats settle in well.

such a cute cat!

Poor The Bear, Im sure she'll miss him once he's gone! Cats really are one of a kind.

Good luck with the move