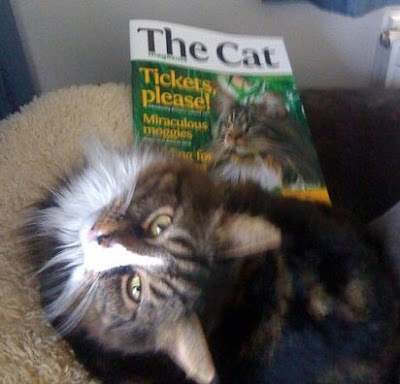 As regular readers of this blog might have gleaned, I became a single person last year (I haven't wanted to make too much of this, but since my ex, Dee, was a fairly sizable part of the story in Under The Paw, it would have been an insult to readers not to mention it in Talk To The Tail). As a state of being, it's actually not without its perks – sometimes, I’ll throw a wet towel on the floor and leave it there for a whole four minutes before picking it up - but it’s also been a slightly bewildering phenomenon at times. Of course, I’ve been single before, but since that happened in 1647, I’m not sure my memories of it are at all relevant to the present day. There’s also the fact that, last time I was single, I was not living alone with four cats: a domestic set up that can be a huge drawback in the dating world, or a major plus, depending on who you ask.

I’m told by cat-loving female friends that being a man who owns multiple felines marks me out as "solid boyfriend material", but then they would say that: they like cats, and are being nice to me, because they are my friends, and know I’ve been through a relationship break-up in the not too distant past. Am I really more "sensitive" because I like cats? I suppose I have a sensitive side, but I also probably like beer, big boobs and loud rock music no less than many manly men who wouldn’t allow a feline in the house. I’m also aware that there’s a flipside to the perception: that there are also women, even women who like cats, who will immediately start asking themselves questions about a man living alone with that many sets of paws. Why four moggies, and not just one? On a deeper level, what do the cats “represent”? If he has that many animals, does it mean he can’t relate to humans?

If I were to answer these questions, I would say it’s as simple as this: I like cats, my ex also likes cats, so we ended up getting a lot of cats, then, when we split up, I ended up keeping slightly more cats than her. But as we all know, that kind of explanation might not cut it in the real world. Another single friend recently signed up to one of the more wholesome Internet dating sites and showed me her profile and asked me whether there was anything I thought she should add. “You haven’t mentioned that you like cats, have you?” I said. “No. She replied. That’s because you don’t, if you’re a girl. It’s The Rule.” I noticed that in one of her photos she had cropped out Bob, her chunky tabby. I felt sorry for Bob. Had he had any say in this?

“But you wouldn’t want to go out with someone who doesn’t like cats, though, would you?” I asked. “No!” she replied, horrified.

I’m not sure that single men would worry quite so much about having a moggy slinking in the rear of their shot on a dating site, but Crazy Cat Woman is now so ubiquitous, she is altering the way we all think about our pets, whether we’re male or female. She’s been here forever, yet she seems to be particularly prevalent in modern culture – on The Simpsons, on sitcoms, endlessly referenced in daily conversation. “You want to be careful. You’ll turn into the lady with all the cats and no friends!” “Uh-Oh. You’ve got hair on your jumper. Mad Cat Woman Alert!” Certainly, there are people out there who project too much onto their animals, and start to let their hygiene standards slip as a result of being around them, but they are in the minority, and it seems sad that we are going to quite such lengths to hide our cat love because we’re worried what the world thinks? Surely loving cats says more good things about a person than it does bad ones: that they’re patient, an appreciator of beauty, open to a challenge? There’s the possibility that it might just say plainly that they love cats. Having said that, I will confess that I met a girl recently who talked a lot about how much she loved the smell of cat food, and I found it hard to view it as a plus. But let's face it: that’s just plain weird, isn’t it?
Posted by Unknown at 08:58

Great article. I do agree with your single friend...if a person says 'my dog is my best friend' and has pics of them with their dog, its cute. But the moment you say your cat is your best friend, you're some weird cat lady. Personally, I think a guy with cats is about a million times more appealing instantly than a guy without cats...gives them a head start, regardless of all other factors. And in my defense, I have great hygiene but cat hair gets in to EVERYTHING!

I'm instantly turned off by men who don't like cats.It's love me love my two cats and if my cats don't like somebody I would be very suspicious of them!

You couldn't possibly love anyone that didn't love cats. That's like not loving sunshine! But if the person is allergic, well that's just plain sad. Move along...I feel sorry for Bob too.

I agree with Liz - a man with cats is automatically sexier than a man without. Tom, I empathize with you - I only have 2 felines, but you'd think from the comments I get about them when I mention that little fact that my home is overrun with wild animals. It's hard to be 30-something and single and have more than one cat, but at the end of the day, they love me uncondtionally (although they'd never admit it), and that's what matters to me.

So you one-upped my one guy with three cats household, but I'll bet my cats can shed more hair than your four.

I'm sure people I know find it odd that my schedule revovles around feeding and medicating three cats (the two females are elderly and currently on 6 drugs), but at least, being friends, they don't laugh out loud. The love I get from my moggies more than makes up for any inconvenience or social shortcomings.

Loving cats definitely says more good things about a person than bad. How they treat their cats is important too....a good insight into how one might expect to be treated...lots of tickles and strokes, or being treated like a piece of furniture? (someone who likes the smell of cat food is truly weird)

Take this as a compliment:
if you're watching a movie, a you see someone who has a cat, he will definitely not be the bad guy! Unless the cat is a sphinx (my sister has two of them, by the way) or very fat and mean looking (but that was in a cartoon, obviously).

A friend said to me the other day, "I was describing you to this person and trying to explain how much fun you are and how much you like cats but I think all that happened is I made you sound like a crazy cat lady."

Excellent. Doomed to be single forever.

(Except I'll have my cats.)

Well I think you have it ALL RIGHT. And you are funny (we all know the huge plus this is). I have told so many people (more women than men admittedly) about you and your blog and have your book etc etc (am not a stalker).. you wouldn't need to go the traditional dating route were you to be so inclined - just use your blog which is a subtle way of showcasing you and your felines many talents (afterall you all come as a package). thanks for a super blog. Helen

...but would your cats object to someone new in your bed? mine would!

although, if the someone new came bearing chicken, they'd be welcomed with open paws.

My biggest worry about dating a man with whatever number of cats would be if their cats would get along with mine in case things progress to move in together. I started talking to my current boyfriend exactly because he posted a photo of his cat on his profile (the first line on mine was something like "loves cats, rats, horses, goats, owls etc." so he knew exactly what he was getting into!)

Love cats...of course...and love men who love cats, however, there are weird men with cats just as there are weird women with cats...Met one who had 5 cats...all indoor, and all prettily shaved into lion coffs! (No shedding...) I love my furry friends. I like them because they have fur! I'm a very tactile person and do massage for a profession, and my kitties reap the benefit of that! Anyway, I just hope there are more men in the world like you who love and appreciate felines!

Such irony..my bf likes cats but doesn't like the smell of their food nor the hair they leave on clothes and the furniture.

My cat on the other hand didn't want to leave home with my mum when I left to live with said bf!!!

So both cat and bf are happy but I miss my cat!!!

I'm sorry it didn't work out with your partner. I hope you gave her as much attention as you gave your cats :)

Most men like beer, big boobs and loud rock music, but only real men are kind to animals. Be careful that the ladies don't think you're just practising for having real babies though.

...and I'd NEVER but NEVER even consider a guy who doesn't love cats. In fact, I jettisoned one guy who most would regard as "A-List" the moment I found out he was not enamoured of the feline kind. His loss.

Must love cats...that's first. It's ok to love me next...that's the way it's got to be for any person in my life, romantically involved or not...