Guest Cat Of The Month For August: Softface 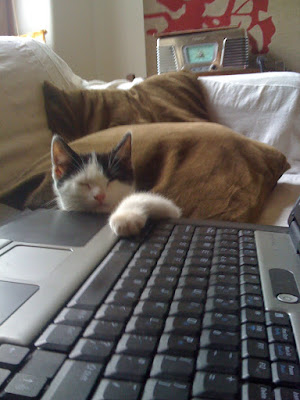 What constitutes a perfect evening for you?
I like it when Katia gets back late because it means I’ve already had my 13th nap of the day. Generally when this happens she feeds me twice out of guilt. She's so Jewish!

After my first dinner I like to have a plastic bag rustled for me so I can rush into it really quickly and then be spun in a circle. I would probably maul Katia’s arm for a little while until she gave me my second dinner in an attempt to distract me.

This would have to be a balmy summer night so there are a few flies on the balcony. Sometimes I try and eat them but if they’re out of reach I just stare up at them making creepy teradactyl noises until they fly away. After Katia gets into bed I’ll snuggle with her for about 2minutes and 30 seconds and then bite her and jump off the bed. I’ll hide until she starts dozing off because then I can really start to fuck with her. I do this by randomly digging my claws into the soft bit between her toes and the pads of her feet. I’m lucky because she sleeps on her back like a starfish so sometimes I can walk up her back and bite her head. That is freaking hilarious. She hates it so much! When she finally gets to sleep I love going out on the rooftops where me and my buddies fight each other in one of the derelict flats on the estate. It’s kind of like that film Fight Club but without Meatloaf jiggling around.

Favourite Food?
A round of Applaws if you will. Ocean Fish is my poison.

Defining moment of your life?
Killing my first pigeon. That was awesome. And it was tasty.

Any Enemies?
Flies. And also anything else that flies.

If you could do one thing to make the world a better place for felines, what would it be?
I would give us all wings, making us the ultimate predators

If you could meet a celebrity who would it be and why?
I think I would have a fair amount in common with The Marquis De Sade

Which one of the cats in Under The Paw would you like to be stuck in a lift with?

Janet, I think there’s a good discussion to be had around feline gender identity.

Biography
I was born in a cafe in Lower Marsh Street called Scooterworks in October 2008. My dad is also my brother. Looking back my I didn’t even realise our family situation wasn’t ‘normal’. It wasn’t until I read a copy of Chat where a woman found out her older brother was actually her father that I realised families weren’t supposed to have sex with each other..

They used to call me ‘The Black and White One’ to distinguish me from ‘The Grey One’ I found out ‘The Grey One’ tried to kill himself by jumping out of a window one day. Maybe he read the same magazine I did and had a bad reaction to it. Apparently he’s okay now but he had two of his legs in casts for a while. I miss The Grey One sometimes.

On Christmas Eve Katia came and got me and she changed my name to ‘Captain SuperGreat’. I had my very first Christmas in my new house and Katia made me my very own mini chicken that I was allowed to climb all over and eat.

My name didn’t last long and one night she noticed that I had a really soft face and that’s the name that stuck. I’ve lived in South London all my life and I’m happy here. I did have a scare recently when I got trapped in a wall cavity in one of the derelict flats I mentioned earlier. I’d been there ALL DAY and was starting to get a little freaked out. I could hear Katia asking the neighbours if they’d seen me so I managed to get her attention by meowling as loud as I could and sticking my hands down a tiny hole in the roof.

I tried to crawl through it to get to her but my head nearly got stuck which was really upsetting. Katia called the firemen. When they arrived they started bashing holes in all over the estate trying to figure out how to get to me. In the end they made a MASSIVE hole in the roof outside her neighbours flat and I managed to escape. That’s probably the most exciting thing that’s happened to me so far, but then I’m still young. Maybe I’ll be in Chat magazine one day. 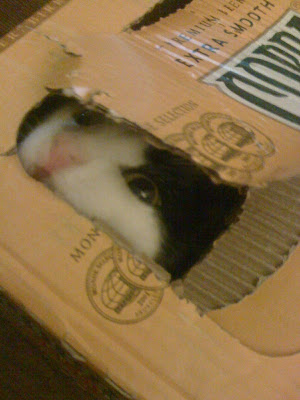 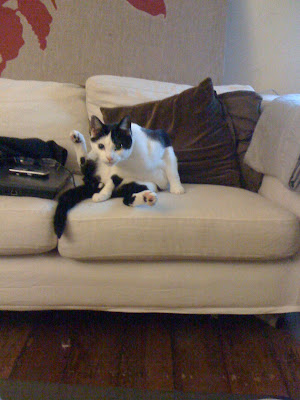 That top photo is pure genius.

Will also be storing away the name Captain Supergreat for future use.

Does this make you your own grandpa, Softface? ;)

Softface you have the most awesome name!!! and you're really cute.

Bet that isn't what the firemen said when they were trying to dig him out of the walls!

You sound like a right little bugger, Softface. A true cat, in other words...