Latest development in the ongoing saga of Janet and his hyperthyroid pills (Janet is a boy, btw, for newcomers to Under The Paw): it has been decided that submerging the pill in paté is a reliable Trojan device. This seems to be working so far, but I've thought the same with various other tactics that I've used to make him take the pill, and been proved wrong. First there was the Submerging The Pill In Reconstituted Meat method, then the Putting The Pill In A Pat Of Butter method, followed by the truly icky Cutting Open A Chunk Of Meaty Goodness And Putting The Pill Inside That Then Resealing It method. Of course, these have all been usurped at times by the Grabbing Him And Wrapping Him In A Towel And Shoving It Into His Mouth method, but I would, if possible, like to think I'm not the kind of person who would drive one of his pets to leave home for good and tell tales of cruelty to random strangers. Moreover, I wear a lot of t-shirts at the moment, and I don't relish having to repeatedly explain to friends that the state of my lower arm is not the result of self-harming. I have a pea shooter waiting in reserve, recommended to me by my Siamese-owning former neighbour, Bob, which I've used once on Janet and found quite effective (the expression on his face was possibly the most shocked I've seen since the time 8 years ago that he forgot he could fly and decided to jump out of a second storey window in pursuit of a wood pigeon). I hope things don't come to that, but they almost certainly will.

In the meantime, my main problem is a) how much paté actually costs and b) trying to explain to my other cats that, despite what some of my enemies and very good friends might claim, I cannot produce spreadable paste on demand. The latter is proving particularly difficult in the case of Pablo (see below, looking eager and unusually sane), who is currently stalking me on a near-24 hour basis and has taken his fondness for headbutting to new extremes. I mean: I like a friendly nudge from a cat as much as the next ailurophile, but I'm sure there's something wrong when an animal a tenth of your size nuts you so hard he almost sends you sprawling across your kitchen floor. 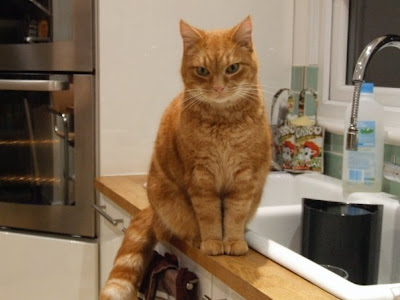 Cats and their pills - many a time you think you've managed to ram it down their throat or convince them to eat it and low and behold, you find the soggy pill collecting fluff on the carpet later...and round 2,3,4 commences...

Try Taramosalata, much cheaper than pate & fishy flavoured too.

Our big ginge also has hyperthyroid and has to have many tablets each day. It is a constant battle of wits - man against cat, the ability to clean a dish and still leave the tablet in there, the sudden discovery that he can hide a tablet under his tongue and carry it around for fifteen minutes before depositing it on the carpet.
None of this was in the handbook.

Earlier commenters suggested Pill Pockets and i second that recommendation. Also, they can make up the hyperthyroid medicine in a transdermal gel that you spread on the skin inside the cat's ear...this is very good for cats who love to be stroked but don't like having pills shoved in their face. A third choice is to have the pills made up by a compounding pharmacy in a flavored medium...my Gingy loved her pills in a tuna flavored base (until she proved allergic to the tapazole and had to discontinue the medication altogether).

Giving cats pills is always a nightmare - stress plays a large part (mine) in deciding the outcome of any pill-pushing venture. I've recently had a cat diagnosed with inflamatory bowel disease - he's on pills now every day for the rest of his life. Before the condition subsided these pills were responsible for whether he lived or died and the pressure on me to get them down him was immense... A daily battle ensued and every time I approached him I was already tense and worried. It's got so much easier since I learned to distract him before giving the pills. Now I give him his food and, while he's purring excitedly and focused completely on his very expensive, this is the only stuff on the planet that doesn't make him ill food, I give him the pill. I pop him back into a sitting position, bring his head back and open his mouth, making sure I can see straight down his throat before dropping the pills (yes, two at a time, such is my skill..) down the vibrating hole. It helps to have a wall behind him, like at the end of a counter top, so he can't reverse away and round to the food and having the food there means he doesn't want to run off. I guess it also helps that he's a little pig and really wants the food. He goes straight to his dish after too so there's no chance of spitting the pills out as he's already sucking up the food... Joy and happiness is restored in our household and I sometimes wonder if he's even noticed me giving it to him!

I may be stating the bleedin obvious, but is there a palatable version of the pills?

Hi Tom
Tried shoving pills down Pixie the other day. No luck. Paused for a moment and she licked the pill with a flick of pink and swallowed it down whole. Weird.
We have no roof over our heads now. Can you email me?

We used to hide the pills in with catnip drops and that worked for Dougal but with Percy the only methos that ever worked (and even then it wasn't foolproof) was the tightly wrapped towel method.

quiltcat sounds as if (s)he's onto something there. Janet, meet eargel! ;)

My 15 (going on 16) year old black cat Spook had hyperthyroidism and was at first also on the tablet treatment. Due to a combination of my inability to disguise the tablets well enough, and his inability to keep much of his food down at the time, I ended up booking him in for radioactive iodine therapy. He was away at the vet's for a week whereby he was given a capsule with radioactive iodine in it. It is the same treatment that humans get for hyperthyroidism. It cost AUD$1000 (although initial xrays and tests were another $1000). Yes, pricey, but it is a one-off treatment for most cats and also worth it given that it saves having to go through the sometimes stressful process of administering tablets. He went from weighing less than 3.5kg at his worst, to 5.6kg in only a few months. He was back to his "normal" self, testing his fitness by climbing onto our roof at ungodly hours of the morning and then pretending to "forget" how to get down. Not sure if this is a common/available treatment for cats in the UK but if it is, it is definitely worth considering.

oh how i laughed at the stalking head-butter!

Pablo is a most impressively weird cat! I loved the photo!

You can get relatively palatable tablets (I think they're called Mercazole) that can be crushed into food.

My only current hyperthyroid cat, Linus, cannot be given pills by mouth but happily swallows large doses of the above mushed into various kinds of Felix with jelly.

Just have to make sure the others don't eat from his dish.

we used to grind the pills up and then mix them with butter and put it all over their paws. Natural cleanliness instinct takes over and voila! Drugs gone!

Hi Tom, how's the cat dosing going? I'd only had our Greebo for under a week when he was diagnosed with having cat flu.

He still doesn't like being picked up even now, and then? No hope. So, how to get the pill into him?

I found a small dob of cream cheese wrapped in a sliver of ham/chicken meat made for a good cat canape, and he wolfed it down out of the palm of my hand.

Maybe worth a shot? Good luck, and it's nice to know that even an experienced cat owner still has their pill probs...cheers! :)

My cat takes two pills daily for heart disease, and I just crush them and mix them in with her (wet food) dinner. This wouldn't work with a nasty-tasting pill, but if the hyperthyroid pills are fairly bland, perhaps you can sneak them in. It's also quite therapeutic to give a pill a good crushing once a day. I don't have a conventional pill crusher, so I wrap the tablets in waxed paper and smack them with a rolling pin. Fabulous!

(Oh, and Pill Pockets work well too, but may not work on a cat who's sensitive to texture variations. I also find them a bit pricey.)