Guest Cat Of The Month For July: Mogliavelli (She Had Her Staff At "Meow") 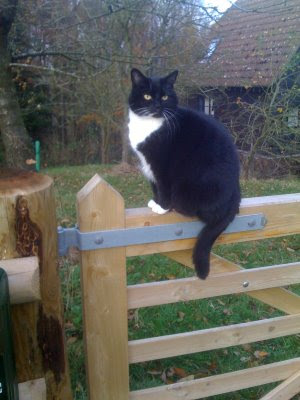 Nicknames
Mog, Mogs, Mogli, Moggles, The Moggle, Madam are the ones I like Staff to use. Male Staff often calls me his 'Good Girlie' - I really like that.
Ones I'm not so keen on are: Pest, Pestly, Baby Beastly and the Tummy-rub Whore.

Age
How impolite to ask. Staff aren't sure. The vet says between 5 and 8 - well, that's helpful isn't it? - and I'm not telling.

Owners
As a cat, I don't buy in to the concept of ownership. I have Staff - they are called Female Staff and Male Staff.

Favourite habits?
Hunting rabbit, closely followed by (hopefully) eating rabbit. Sitting on my look-out platform, surveying my territory and supervising Staff in their garden endeavours. (Male Staff made my platform from lots of "ropey old pieces of wood", as he wasn't sure I would like it. Now he can't remake it with nice new wood as I'm never off it for long enough). Oh and I love climbing, but not getting down again. Sometimes Staff have to get the ladder (which is a bit embarrassing).

What constitutes a perfect evening for you?
To start, a supper of Morrison's tuna chunks in spring water, followed by some Applaws dry food. After that, I like to 'help' Staff when they water their vegetable garden. I often have a little dig in the raised beds and leave a small deposit of 'fertilizer' to help them out. Then, it's down to my proper work of vermin control. I've got an acre of garden to patrol so it can take some time. If I catch something, I take it indoors so Staff can see what a productive member of the household I am. If the weather is good, I might have to spend the whole night on patrol. However, if it's raining, it's straight upstairs, on to Staff's bed for treats and at least half an hour of tummy rubs. All very exhausting.

Favourite food?
Things I can catch myself, but especially rabbit & vole (bank or field, I'm not fussy). I'm also quite partial to Morrison's tuna in spring water.

Defining moment of your life?
Female Staff finding out that I hadn't been fed for 2 weeks by the new neighbours who were supposed to be looking after me. Within 2 hours I had a new home, a new bed and Female Staff's friend had fitted the cat flap so I could come and go as I pleased. Or possibly, Female Staff telling the vet on our first visit that she didn't know how to look after a cat as she was "a dog person", and him replying "Not any more". His reply might, just might, have something to do with the fact I had buried myself into her jacket and was gazing up into her eyes at the time. I had her at "Meow".

Any enemies?
Sooty the tomcat from next door. We used to live together, but now he's my nemesis. He waits until I've caught something when I'm out hunting and then tries to steal it from me when I'm on my way back to the house to show Staff. Staff say he's acting like a 'mogger' and chase him off. Also the ginger and white tom who keeps coming in my garden at night and singing to me. When will he get the message that I'm not interested. I just have to face it, I'm a 'tomcat magnet'.

If you could do one thing to make the world a better place for felines, what would it be?
Better Staff training.

If you could meet a celebrity who would it be and why?
Sir Alan 'Suralun' Sugar - we've both had lots of experience in firing Staff.

Which one of the cats in Under The Paw would you like to be stuck in a lift with?
Most probably Bootsy. She and I could discuss our mutual interest in world domination and I just have to know, how does she stand living in a house with 6 males (that includes you, Tom)? I can't stand a tom within 20 feet of me.

Biography
I wasn't happy with my first set of Staff, so I fired them - don't ask about them, I don't talk about it. Suffice to say, one Saturday night in Spring 2003 (not sure when, I don't worry too much about dates), I turned up on the doorstep of Female Staff and Male Staff and cried all night to be let in. They couldn't look after me because they were off to London for work the next morning, and hoped that I'd just wandered away from my home and would make my way back there if I wasn't encouraged to stay. Before they left, Staff gave me some milk to drink because they were worried I might be hungry and thirsty. I NEVER forgot this act of kindness.

When Staff arrived home the next weekend, they discovered that their neighbours Amy & Tom*, animal lovers both, had taken me in and christened me 'Lucky'. They were my second set of Staff and I lived with them and their menagerie of dogs, a horse and 2 other cats - Sooty (my nemesis) and Beckles (the recluse). However, if Female Staff and Male Staff were at home, I was with them - hunting in their garden, 'helping' them manage their orchard, scrounging cheese from their sandwiches, etc. This lasted until Summer 2007 when Amy and Tom had to move out for family reasons. They couldn't take us cats with them as they were moving to a house next to a road, so they asked the new owners of their house if they would continue to look after us. The new neighbours want us and didn't look after us - they didn't feed us for 2 weeks, so Sooty and Beckles disappeared. And me, I just fired them and moved next door.

And how did I get my name? Well after 4 years spent convincing Staff to take me in, I am the Mistress of Manipulation.

*names have been changed to protect the innocent. 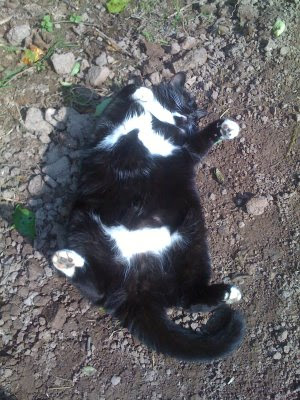 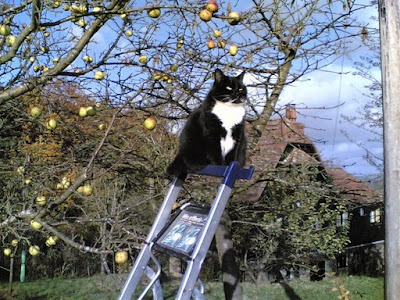 What a lovely girl you are Mogliavelli. We hopes your new staff proves satisfactory for a long time to come. ~Socks, Scylla, Charybdis & Fenris

You really want to go for a different supermarket to Morrisons for your tuna, puss. They're not doing a hell of a lot for animals and the stopping of animal testing. Try Sainsburys of better still, the Co-op - I'm sure it's every bit as yummy!

You are FABulous, darling. Keep them firmly under your paw.

Well done Mog! Pleased to see others appreciating your beauty and cleverness.

Thanks for all your comments, Mog will be very proud.

Thanks also Mike. Sadly, where we live - way out west - it's a long, long way to another supermarket. The Morrison's is also in my local market town where I like to do most of my shopping to keep other local businesses open - bookshops, stationers, grocers, butchers, etc. - and not to drive to larger towns where you can only shop at multi-nationals. Sadly, no one but Morrison's has tuna in spring water. It also provides a lot of much-needed jobs for local people. So I'm trying to do my bit for the local community whilst also keeping my CO2 emissions to a minimum. I hope that's a good enough reason. Remote rural living tends to restrict your choices somewhat. And I dearly wish we had a Co-op.

Such a wonderful post about our friend Mog. She looks absolutely beautiful in the photos. Confucius Cat aka Alley Mason

Oh please, tell me there was some kind of happy ending for Beckles? Although the two "people" who failed these cats so cruelly getting polio or ebola would be welcome news, I'd rather know if Sooty & Beckles have anyone to care for them or if they died.

Tits Matilda,
I informed Tom and Amy about what had happened immediately, and as soon as they received my email, they came over and spent a whole afternoon trying to find Sooty and Beckles - searching a 100+ acre common takes some time. We couldn't find any sign of them.

Sooty came back after about 2/3 months and the neighbours started to feed him as by then, they had an infestation of rats in their horse feed store. He's Mog's nemesis - they don't get on at all and he's still trying to steal her catches or use her look-out platform - but I can't tell you how pleased I was to see him when he came back.

We hadn't see Beckles for almost 2 years, but unbelievably, last weekend we saw him on the common, hunting in the gorse. He looked well, so I believe someone is feeding him, possibly one of the local farms. He was always a good hunter, so he'll be a real asset to any country property.

I hope that puts your mind at rest.