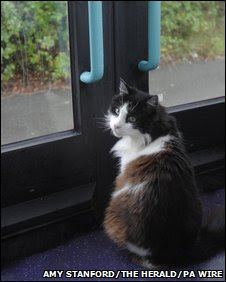 Someone recently sent me a photograph of a cat riding a bus, via my Twitter page. To be honest, I couldn't see any real evidence that it was a bus, and not, say, just a really roomy camper van with a unusually inoffensive colour scheme, so I was a bit sceptical, but this story about Casper, a Devon cat who is known to frequently ride his local bus, suggests such scepticism was misplaced. Casper's owner, Susan, describes him as a "free spirit", which leads me to believe that her experience of cats is not hugely extensive. I would argue that any animal who expresses his "freedom" by queuing up for the Number 3 from Plymouth is, if anything, a commuter drone in disguise, dissatisfied with his natural, liberated feline lifestyle and keen to join the straitlaced human rat race. A cat with a true unshackled hippie outlook would have learned to hitchhike instead. In fact, I am sure, judging by the rate that these eyewitness news reports of cat evolution are flooding in, that a feline is learning to do exactly that right now, and I will be posting a news story about it here in around a week's time.
Posted by Unknown at 09:51

Someone sent me this story awhile ago, too. I wish he'd hop on board a bus over here -- I'd bring my cat basket and catnap him! He's very handsome.