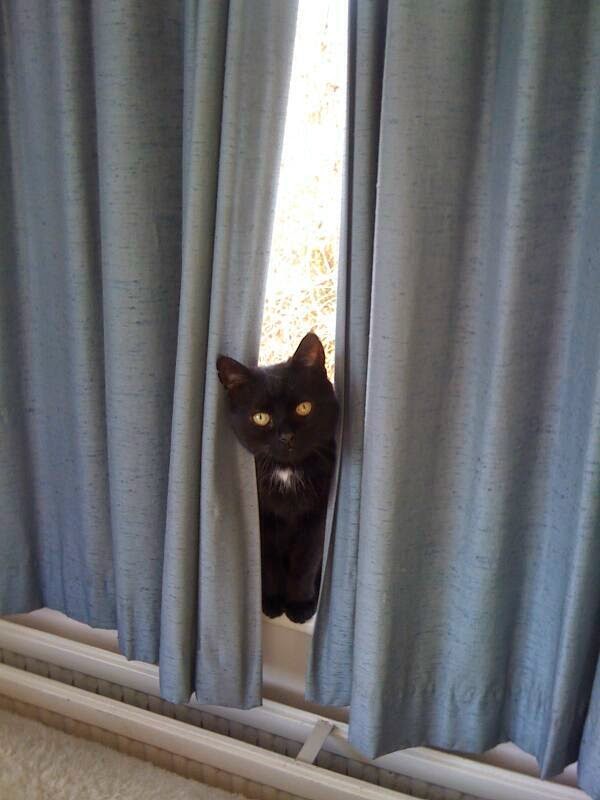 THE BEAR
The Bear - aka @MYSADCAT - is, by some distance, the most polite cat I've ever met. When he wants food, he asks for it not with a meow, but by nodding eagerly towards the food cupboard. Now 19, and a bit of a Benjamin Button cat (he's starting to look something like his age now but looked older at 5 than he did at 17), he has more of a meeoop than a meow: a noise that, despite its gentle nature, can pull noisily at your heart strings with its central question, which usually seems to translate as, "Can you tell me why I am a cat, please?" While other cats throw their weight about in various ways, punching each other & killing rodents, The Bear adopts a pacifist lifestyle and prefers to spend the day following me around, staring at me with his big saucer eyes, which seem to contain all the world's sadness. I did once catch him sitting alone with a dead mouse but I think another cat had killed it, and he just wanted to read some elegiac poetry to it. 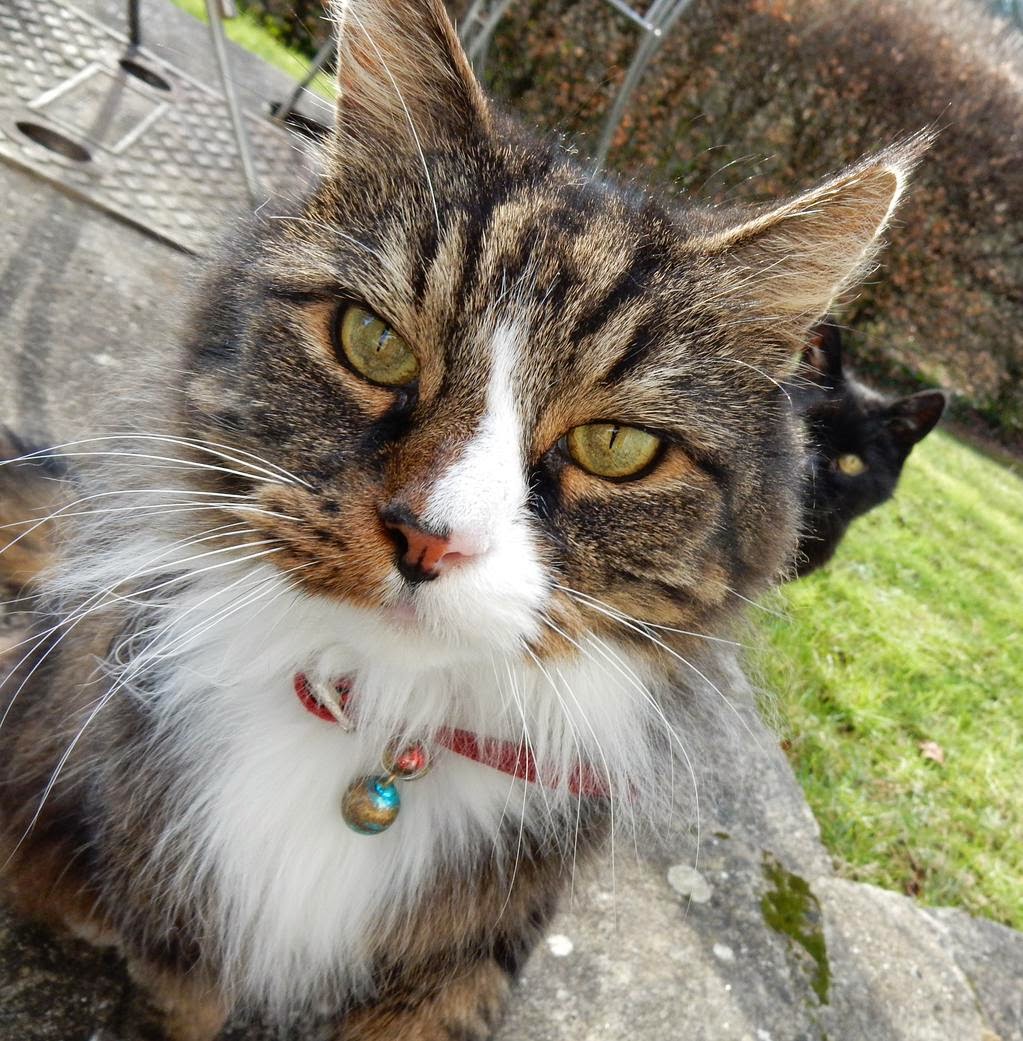 RALPH
"Can cats actually have sideburns?" you might wonder. The answer to the question, for anyone who has encountered Ralph - aka @MYSMUGCAT - is an emphatic "Yes!" Frequently compared to such hirsute mid-20th Century male pin-ups as Jim Morrison and Parallax View-era Warren Beatty, Ralph is simultaneously the most pretty and the most narcissistic of my cats. His beauty comes at a price, though - largely that of being a magnet to parasites and other creepy-crawlies, never more so than during the autumn of 2012, when he averaged around two slugs on his back per day. This wasn't ideal, especially when I found one of the slugs swimming around in my unattended morning cereal. That said, I found the image of the slugs on his back wasn't quite so bad if I imagined that each one was a small snake riding a horse. Ralph is also known for being able to meow his own name. It's a clever habit. Alternatively, perhaps he's just one of those annoying cats who like to refer to themselves in the third person. 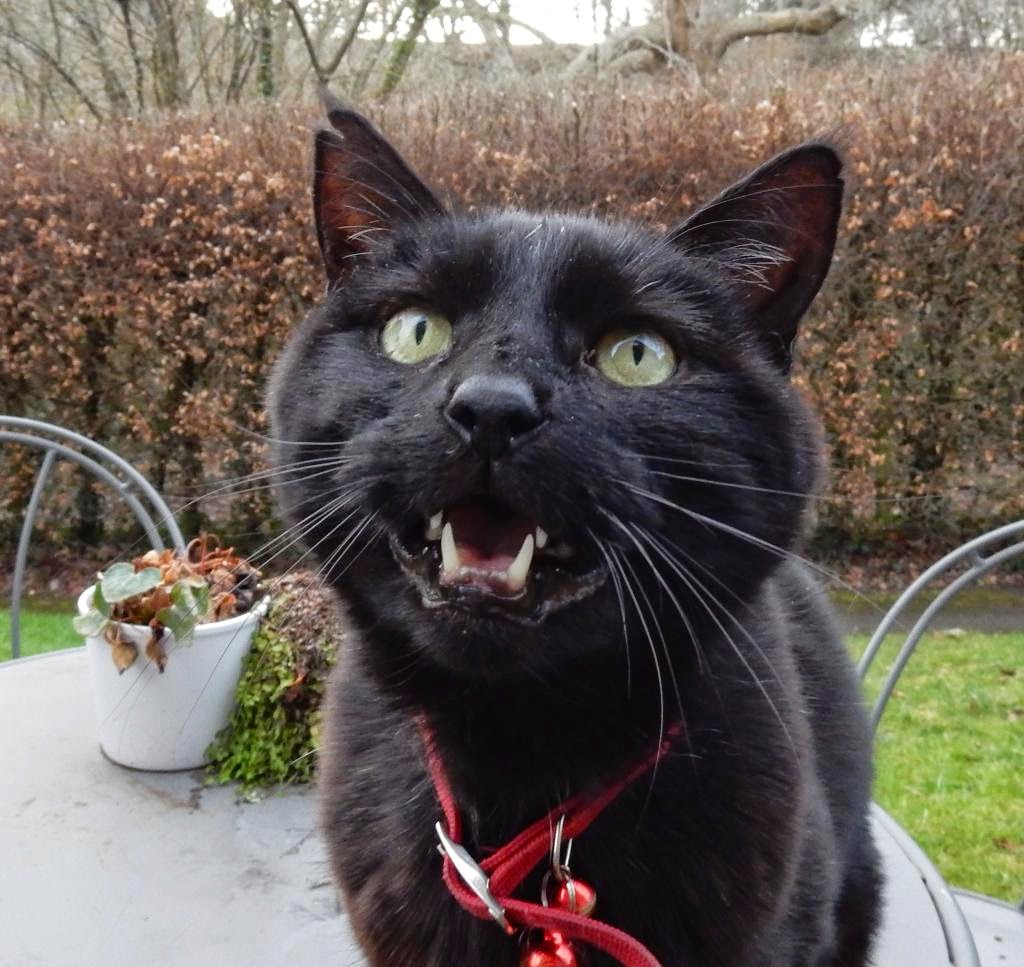 SHIPLEY
Imagine a fur-covered mix of Malcolm Tucker from The Thick Of It, a medieval fool employed to entertain those who pay for his food, a punk rock musician and an unusually large, especially persistent meat fly, and you pretty much have Shipley - aka @MYSWEARYCAT - down to a tee. Picked as an "extra", way back in 2001 when I adopted his brother, Ralph, due to the fact he was the runt of the litter and I felt sorry for him, he soon grew into a personality that was anything but runtish, and got into the habit of walking around the house swear-meowing, batting The Bear on the head and chewing any paperback book I was remiss enough to leave lying around. Shipley is constantly in my face, talking trash. This persona can only be defused by picking him up and turning him upside down, at which point he will become as mellow as a Grateful Dead fan at a "legalise cannabis" fundraiser, and purr in a such a powerful way, you suspect it could serve as a renewable energy source. 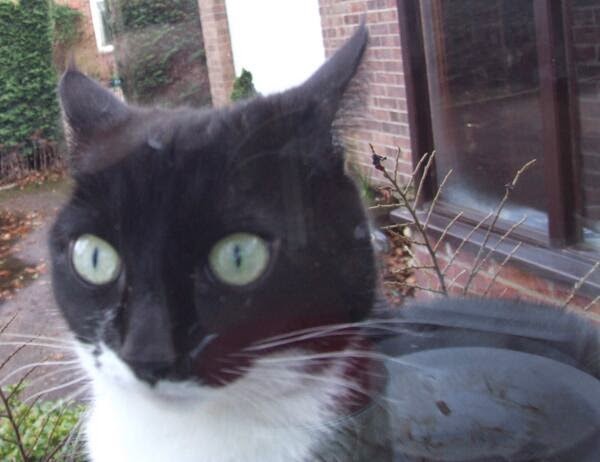 ROSCOE
Princess was born into a cultured environment in Kilburn, West London, in February 2012, then, a few months later, cruelly transported into a far less cultured one, in Norfolk, by her new owners and given the name of a dead American man from the 1800s. Roscoe now lives in Devon with three male cats, all of whom are much older and much bigger, but significantly less hard, than her. Her hobbies include hedgerow admin, flirting with strange men at the pub near our house, dancing into the kitchen on her back legs whilst doing "paw high fives", and eating human hair. She is still feeling very bitter about not being picked to star in the new Batman film, although has hopes she will not be overlooked for the sequel 'Batman Returns: As A Small, Businesslike Female Cat'. 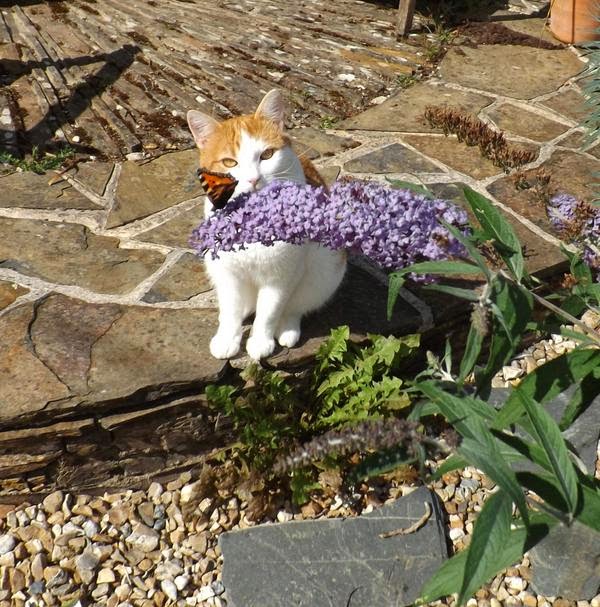 GEORGE
George is a former stray who lived here in Devon with me for six months: first in a bush in my garden, then - after I'd taken him to the vet to get his unusually huge balls cut off - on various chairs, cushions and freshly washed jumpers inside my house. I'd initially thought he was a rough cat from a nearby problem area putting the muscle on The Bear, Ralph, Shipley and Roscoe but he soon transpired to be a lover, not a fighter. This was confirmed during his first week living here, when he purred at a bee. He was, however, a little too much of a lover, his sex drive and his lust for Roscoe not diminishing, even post-castration (hence her escapes to the pub). Out of fairness to Roscoe, he now lives at my mum and dad's house in Nottinghamshire, is getting increasingly round, and experimenting with various new sounds - one of which, my mum tells me, is "like a quiet cockerel".

The Bear, Ralph, Shipley and Roscoe all feature in my books Under The Paw, Talk To The Tail and The Good, The Bad And The Furry. 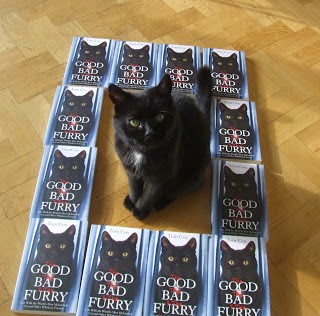 The Good, The Bad & The Furry has also just been published in America and can be purchased easily from Barnes And Noble, Apple or Amazon. You can read a sample of it in this Guardian newspaper piece.

If you are elsewhere, The Book Depository sell the The Good, The Bad & The Furry (and Under The Paw and Talk To The Tail) with free worldwide delivery.


If you're in the UK and want to support independent publishers, the best place to order from online is Hive.

Graffeg publishing also do a range of @MYSADCAT, @MYSMUGCAT and Roscoe kitten advice notecards and calendars, which can be viewed by clicking here.

The final @MYSADCAT book Close Encounters Of The Furred Kind (which features George, as well as the other cats) will be published in October.
Posted by Unknown at 09:10

I enjoy your posts and have shared quite a few. We haven't had cats in years but love them dearly. -----Deborah in Colorado

My cat passed away last year but I'm planning to get 2 more court jesters soon!!

I look forward to October, then!

Are the cats planning a book signing?

The last book? Please let there be more...

Can't wait to read it.

I have never been a "cat person" until we finally moved to our farm. We now have 15 furry sentries guarding the perimeters of the barn and chicken coops at any given time. The "main man" named Ringo, walks with me, guarding me from viscous butterflies and rogue bees as I do my morning rounds feeding the other animals. Taytay, named because of his lack of a full tail, lurked in the tall grasses until he spots me sitting in the cool shade, where he feels the need to hold me in place. We are now a well guarded farm, thanks to our many furry friends.

I love your Twitter. Would you ever be interested in collaborating... I'm a comedian and love the "my cat is sad because..." I would love to write tweets for you. If interested email me at stacymeow@yahoo.com

I really need a laugh today! Thank u for posting the long haired stoned wizard! OMG that was hilarious!

This is great, you really have a talent in describing cats' personality. Giovanna from Italy