Selections From The Cat Dictionary 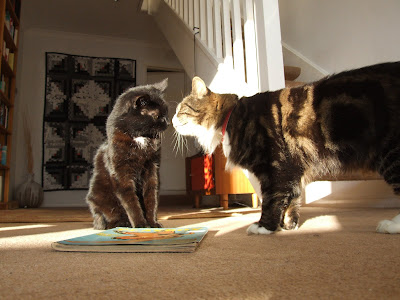 CATGUT
The quality of feline true grit in the face of adversity.

CATIQUETTE
The ancient and mysterious social law that governs the cat universe and allows cold-blooded killing machines to live in relative harmony, frequently under the same roof. When is it considered good form to steal an older cat’s favourite spot on a chair? What exactly makes it ok to virtually insert your nose into a fellow cat’s rear end one dayand it a passing sniff an outright offence less than twenty four hours’ later? In a hungry gaggle of six duplicitous, randomly thrown-together moggies, who decides who gets priority at the dinner table, and how? How does a cat implicitly understand what a “garden” is, and where it begins and ends? Humans remain in the dark about all this, but Catiquette provides the answers.

CATPACITY
For a human to reach the absolute limit of cats you can reasonably own. E.g.: "Man, I would love to take that kitten of your hands, believe me, but I'm totally at catpacity right now."

CATPAWCITY The exact opposite of being at catpacity. Not to be confused with the 19th century American frontier town, Cat Paw City, in South Dakota (population 3017).

E.S. PEE The telepathic process which leads a cat to only get properly settled on its owner’s stomach in the moments when that owner is most desperate for the toilet.

FURMAT'S LAST THEOREM
The inarguable mathematical law that states that a cat’s affection will rise and fall in direct proportion to the amount of dirt on its body at the time.

GRIBBLY BITS The bits of jellified catmeat that escape from the bowl and weld themselves to hardwood floors and kitchen kickboards – sometimes even if your kitchen doesn’t have kickboards.

HELPING
To offer crucial moral support with while one’s owner is hard at work. More popular examples include “Painting” (brushing one’s tail against some fresh paintwork and leaving a hairy residue), “Carrying” (darting in between one’s owner’s feet when they are transporting a heavy tray of food between rooms) and “Testing For Bacteria” (licking some freshly buttered bread while one’s owner's back is turned).

MOUSETACHE
A perfectly-placed mouse, held between the teeth in a perfectly horizontal manner (preferably with a slight downward droop at each end), so as to make the creature’s captor look particularly dashing. Out-of-vogue variations include “The Zapata Mousetache”, “Sidebirds”, and the rare-but-always-impressive “Handlebat” mousetache.

MOUSEOLEUM
A special selection of the house or garden, reserved for one's most venerated kills.

PISSIVE AGGRESSIVE
To show one's anger subtly, via the medium of urine.

QUANTUM PHYSICS
The mysterious force allowing a contented cat to fold its limbs, head and torso into an area a quarter of the size of its usual body mass.

REFLECTYTIME Those meditative moments on the litter tray or the freshly hoed soil when one’s hard-set veneer of dignity is momentarily dropped, a certain faraway dreaminess comes over the eyes, and, just for twenty or thirty seconds, all in the world is right. Also known as "Reading The Invisible Newspaper".

SETTING A PISSIDENT To urinate in a completely new and innovative place, instigating a trend for such action amongst your fellow felines.

SIMULSLURP The mystic force that, without the need for discussion or consensus, will cause numerous cats in the same room all to clean their most hard-to-get regions at exactly the same time.

SLEEPING WITH THE FISHES The particularly contented, lengthy state of REM that occurs after one has clandestinely intercepted one’s owners shopping bags in the wake of their last trip to the seafood counter.

WAKING UP WITH WOOD To emerge, bleary-eyed, from a nap and find a twig stuck to one's tail with no recollection of it being there when one fell asleep.

Read the full Cat Dictionary in Under The Paw, Talk To The Tail  and The Good, The Bad And The Furry. 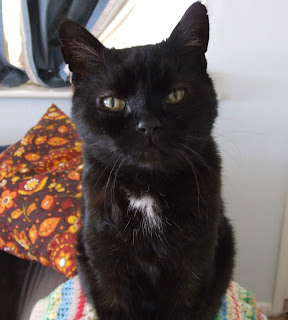 Brilliant! Can I add incatacipated, meaning unable to answer the phone, get another glass of wine etc due to incumbent cat on lap?

Lol! I love that mind if I use it?