Keeping My Cats Out Of The Bedroom: Instructions For Housesitters

1. Dear______ and ______. Thanks again for doing this. It will make our holiday so much more relaxing to know you are here. We are confident the cats will be in good hands with you, and I doubt they’ll cause you any trouble. Just wanted to warn you about one thing: it’s absolutely crucial, while you’re here, that you keep all four of the cats out of the bedroom. The old intellectual black one pissed on the curtains a while back then the middle-aged mouthy black one pissed in the same place to wind him up, and, even though I’ve washed the curtains really thoroughly several times since then and they smell lovely now, you know how it is: once a cat’s pissed on some curtains, that cat will never really forget that those curtains are a lovely place to piss.

2. There is a slight problem with the bedroom door. Even though it’s heavy, it doesn’t quite click shut properly, which means that the mouthy black one, who is as strong and sinewy as a monitor lizard, can push it open. My method for stopping this from happening used to be to the placement of a very old, large, coverless cushion behind the door, but I don’t do that any more, because the old intellectual black one did something unspeakable to it. Also, don’t even think about using that sausage dog-shaped 1970s draft excluder. It’s useless. I don’t know why I bought it really. I suppose when you’re hungover and you’re out shopping with friends stuff like that can seem like a good idea, but you often regret it. Try using one of the massive heavy cushions off the sofa instead.

Also, if you’re passing the big secondhand shop on Magdalen Street in Norwich, maybe you could drop the sausage dog draft excluder in there for me? Ask for Eric. He’s the one with the limp who looks he used to be in The Moody Blues.

3. If the mouthy black one is feeling particularly determined, he can actually still push the door open, even if one of the massive heavy cushions from the sofa is behind it, especially on nights when he has waded through the fen up the road, and wants somewhere soft to wipe his paws. As he does so, he’ll normally make a very loud sweary noise, a bit like a disgruntled teenager, but also slightly like an angry pterodactyl. Don’t worry, though: this only happens twice a week on average, and it’s manageable. You just have to keep one eye constantly open, and be ready to leap out of bed and intercept him before he spreads peaty jet black muck all over the duvet and my original 1970s Superman pillowcase.

4. Sometimes, when the mouthy black one breaks in, and you’re trying to intercept him, the small black and white one who looks like a living cartoon will nip in after him, and scurry under the bed. Try not to concern yourself too much with her. She’s very hard to catch and the worst she’ll do is attack your feet in the night or burrow into your stomach as if it contains a treat that, with enough probing, she thinks she will be able to find and eat. Most probably she’ll just head into the bathroom nextdoor and fall asleep on the folded towels. Make sure that before using it you remember to wash the towel she’s slept on, though - and perhaps the one underneath it, just for insurance.

5. The old intellectual black one does sometimes have night terrors. I probably should have mentioned that earlier. Please don’t be alarmed by these. They normally involve him walking around the kitchen making a weird wobbly-lipped noise which sounds like he has seen the ghost of a deceased lover or is questioning the very nature of existence. I probably make that sound worse than it is. The narcissistic tabby one, for example is way louder when he walks around meowing his own name or ticking cat jobs off a small  invisible clipboard. The old intellectual black one won’t trouble you for long - maybe 45 minutes, at the most. Pop in there and give him a cuddle if possible. He’s used to that, and might feel even more alone and scared without it.

6. Of course, while you’re on a separate floor of the house, comforting the intellectual black one, there’s also the possibility that the mouthy black one will take advantage of your absence and break into the bedroom, followed by the small black and white one who looks like a living cartoon, and the narcissistic tabby one, who does I should probably say have a small problem with bringing slugs in on his back at present. If so, you can’t be blamed, and maybe it will be best to abandon the bedroom altogether, as you don’t want to be waking up later with small bits of soil or slugs between your toes, and, in the words of a couple of my friends who have stayed over recently, “That sofa bed is almost as comfortable as some real beds!”. Don’t worry. It’s no big deal. Have a fantastic stay and we’ll see you in just over three weeks!

P.S. If you visit the farm museum up the road, make sure you get some fudge from the shop. It’s excellent. 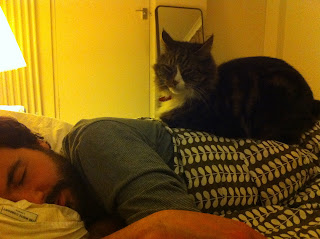 Read the rest in The Good, The Bad And The Furry.
Posted by Unknown at 04:16

This is so funny! Love it. I have some of the same issues with my cats- plus others of course.

I have the house inspector from Battersea coming round at the weekend. I am terrified of doing something wrong.

You obviously have met my cats too ! They do that, why they do that is beyond me, also, the half Siamese one is generally considered the smartest of my lot, but he is the one that will clime over walls and guttering to come through the bedroom window at night and announce himself VERY LOUDLY, now, I have taken him to one side and explained that, if he s quiet and just settles down to sleep, he will get away with it. coming into our bedroom at stupid o'clock yowelling loudly doesn't tend to get a good reaction from either of us and the other half will get up and kick your arse downstairs.

It doesn't work, he is indeed a Fecktard.

You know you could make a whole series out of the adventures of mouthy black one, old intellectual black one, and least we forget the emotionally fragile tabby. it would be successful since that describes so many cat personalities right there. Loved the article, two thumbs up!

Oh yes!!! Love this! I have 2 cats and they agreed with all of this!! hahaha. Great blog!! Our cat sitters calimed we didn't have cats as they never saw them - the food just mysteriously disappeared. bUt they were there. Oh yes!

I am crying with laughter over the 3 am 'hello' - love it!

Housesitters' instructions is hilarious. You have penetrated their souls, its a total hoot! When's it coming out?

*sniggers lots* I think you are a wit and your cats are just as funny too. Off to work out how to subscribe to your blog :O) x

Makes my cats sound so tame! But my mum does leave the door open so he can come and go as he pleases and if there isn't food for him at 3am he'll run up and down the bath meowing like he's stuck in a cupboard. At least there aren't any slugs in our beds...

I have also learnt to beware of the middle of the night proud miaow that means "I have just brought in a mouse and thrown it on your floor". It may be dead, it may not.

This is most entertaining and nice to hear someone else's cats wee up the curtains. Best solution i found for that was to get rid of the curtains and replace with venetian blinds. Only problem then was one of my 3 cats, the one who hit his head and mislaid some braincells when he was a baby, chewed the blinds. I now have some new ones which are wood, we' ll have to see how tbat goes. Look forward to the next episode. Glad I've not had any of my clients make such a request. From a petsitter

My tabby used to lick my eyes when I was asleep

The door thing gave me a serious bout of déjà vu. If we wedged ours shut we'd be treated to a night of plaintive yowling. We have up in the end and let him in - slugs and all.

My tabby does that and sits on my head whilst sleeping on my pillow !