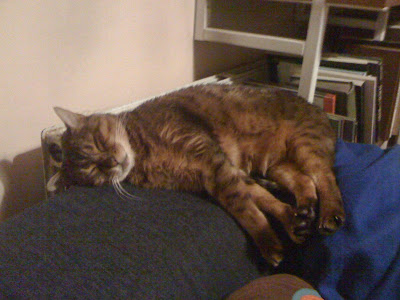 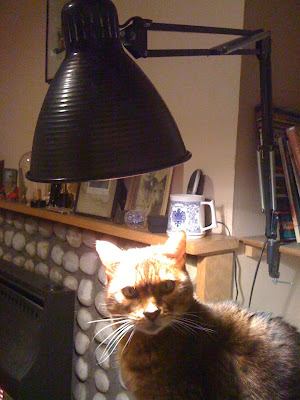 Owners?
Firstly a French breeder, then a deranged pianist, then Annabel for a while Will, now it's Alex and Annabel.

Favourite Habits?
When Annabel and Alex go out I like to go to the basement and roll in cobwebs. Sometimes when they come back they laugh at me and Annabel says it's like her sister's lodger- who her sister found naked strapped to a crucifix when she came back from Tescos once.I used to like wrestling with Annabels bras but my tastes have changed a bit lately. I used to like bouncing on Annabels boobs to wake her up- now I like patting Alex's eyelids.

What constitutes a perfect evening for you?
Lying on Alex's groin. I am in love with Alex.

Defining moment of your life?
There have been many:
Lining dead mice up with catnip mice under Annabel's bedside cupboard impressed her and got me the nickname Pol Pot for a while.
The first night Alex stayed at Annabels studio I brought him a mouse and placed it on his chest while he slept. Annabel rescued him. Annabel's ex boyfriend Jamie made a cardboard badger for an artist called Sarah Lucas once. I ruined it by moonwalking into it backwards and staying there for two days. I had to be cut out. Annabel has a friend called Mimei who doesn't like cats and is allergic to them. Mimei stayed in the ' Anne Frank' space in the kitchen once and I climbed the 15foot ladder a total of 22 times to visit her that night. Annabel had to take the ladder away stranding Mimei up there and I still tried to throw myself at the wall to get up there.
Annabel used to take me for walks in the countryside on a lead. One time she took me to Staverton Thicks which is famous for being where Queen Elizabeth the first went for a wee wee. I saw a deer and Annabel had to climb an oak tree to get me. I clung to her boobs for 24 hours after that. The rip cord on my fluffy jacket had been pulled and my coat wouldn't go flat for ages.
Annabel shrieked with terror when she woke in the night to find me sleeping next to her like a human with my head on the pillow and my body under the duvet. She said I looked like the Tollund Man.

If Annabel ever had anyone important to the studio to look at her work- I used to enjoy taking a dump in my litter tray as they tried to ignore me.
Similarly that thing when I vibrate my arse- Annabel calls bum glitter I do that on strangers too.
Hugging Boudicca to the ground.
Sicking up a hawkmoth
Doing a plop in Annabels cowboy boots- both of them
Torturing bees


Any Enemies?
Children, the angry bluetits that live in the Rowan tree in the garden, Boudicca, Slinky, Vincent, Ed, Mark and the Hoover. Ed tried to stick a pencil up my bottom, Mark demonstrated to Amnabel where he would cut me to skin me and turn me into a muffler and Vincent punched me off his seat once.

If you could do one thing to make the world a better place for felines, what would it be?
They would be allowed to live in their mothers wombs FOREVER

Which one of the cats in Under The Paw would you like to be stuck in a lift with?
Mm this is tricky. I've only had sex with my brothers Lord Raj and Rolls Royce Gentleman so it seems a bit wierd having a romantic interest in a stranger. I think the Bear has a nice name- and a bear and a pig might make a good combination- both eaten in medieval era.

Brief biography
I am French and lived in the south of France for three years. Then I came to Suffolk with my fifteen brothers and sisters where I lived with Sarenka who loved me and her naughty husband Nick who threatened to divorce her unless she gave us all away. I was called Sonatina de Sarengay then because I am a Bengal. Sarenka called me Tina and Nick called me Totty, but I don't want to go into that.
Annabel used to come and look after me and my brothers and sisters while she was studying. She'd drink Sarenka's booze and play her Steinway grand badly with grade two pieces she thought she could remember. She came to get me soon after Sarenka gave me plastic surgery to cover the bald patch on my neck that made me look like a vampire victim. I went to live with Annabel on a boat after that, then with Will for a bit while Annabel went to switzerland. I live in the house of a sculptor now. I love it there. 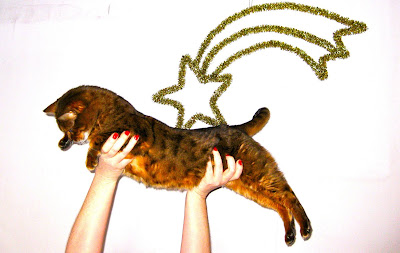 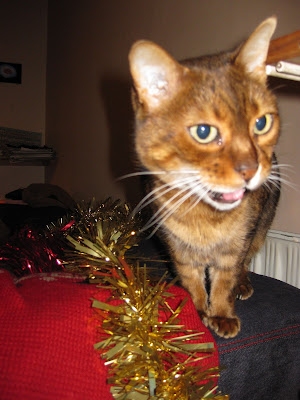 Wow...we feel like we been to a Mew Years Eve Partee after reading that...Happy Christmas and Merry New Year!