Guest Cat Of The Month For December: Parsley 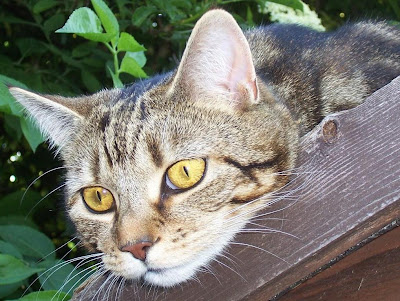 Age?
I'll be four next spring.

Catchphrase?
I can't be bothered.

Favourite hobbies?
I'm not a fan of exercise, but I am quite partial to chasing rolled-up bits of paper. I'd make a decent goalie because I'm good at catching stuff, too. I'm expecting to get a call-up for England, but I wouldn’t play because I’m not keen on going out of the garden. I sometimes go down the alley, so if England had a match down there I suppose I could. Tim used to play as a goalie and his nickname was ‘the cat’ so I’d like to have the same nickname, although I actually am a cat so it wouldn’t really be a nickname. Maybe my nickname could be 'the human'. I get easily confused, as you have probably guessed.

What constitutes a perfect evening for you?
I like sitting on the sofa and getting looked at – and talked about – but not stroked too much. The occasional bit of rubbing with that glove with the bobbles on it is good. There'd be no visitors. That's important, because I get a bit spooked by new people. Usually, at the very end of the evening, when the humans are about to go to bed and want to shut me in the kitchen, I'll dash under the bed in the spare room where they can't reach me. I'll sit there for ages, right in the middle where they can't reach me. You wouldn't believe some of the language they use when I do that.

Favourite food?
Anything. Everything. Tim tries to divide the food equally between me and my sister, Nutmeg, but I wolf mine down so I can steal hers. For the record, though, I'm not greedy. I just have a healthy appetite. I like getting fed by hand best of anything in the world and scrunch my face up so when I’m crunching biscuits I look like an old man, although I’m not – I’m a girl and a cat and still quite young.

Defining moment of your life?
When Nutmeg ran away for three days. It was brilliant. I had the house and the humans to myself. Tim and Isabel were upset so I got lots of fuss and they even gave me more food that usual. I do love Nutmeg and stuff, course I do, because we've growded up together, but she can be a bit noisy and demanding. She's a terrible flirt, too. I'm not one to tell tales, but once when we were in the cattery she minced around showing her tail to the boy next door. Another time, when a hedgehog came in the garden, I think she tried to give it her number.

Any enemies?
I'm quite a nervous cat so I'm scared of lots of things. Dogs barking. Dustmen. The car over the road with the funny engine. People knocking at the door. Brooms. Boots. The postman on gravel. There are enemies everywhere. If I had a psychomologolist they'd tell me that's why I eat too much. It's my nerves. I’d tell them what I tell everyone else: I’m big boned.

If you could do one thing to make the world a better place for felines, what would it be?
Ban rain.

If you could meet a celebrity who would it be and why?
David James. I could show him how to catch.

Which one of the cats in Under The Paw would you like to be stuck in a lift with?
The Bear. I'm not really into boys, but I'd get his number for Nutmeg.

Brief biography?
I was born in Sussex, then moved to Surrey. I never met my daddy, although my mummy was called Mabel and her human said she used to go "loopy for leaves" when she was my age.
My scariest moment was when I got stuck on a neighbour’s pergola. I’d followed Nutmeg over there but then two dogs came out and started jumping up at us. Nutmeg legged it and left me there and I just froze. I sat and pretended it wasn’t happening, staring at the sky. In the end, Tim had to come round with a stepladder and rescue me. He said it was the last thing he needed, because the neighbours already thought he was a crank when it came to cats!
I have a very long tail. Even people who meet me for the first time have remarked on the length of my tail. I think it could win a prize. I also have striking markings and big eyes. Humans often say I should be entered for a show, although I vetoed that idea because I don’t like meeting other cats. I also have a sensitive tummy so I often have to eat boring bland food from the vet, Mr Mike.
My main ambition in life is to catch a pidgin. They sit in the garden and make me go cross-eyed. One sat on the shed for two hours once, so I sat on the grass staring back at it for all that time. I might not be very quick, but I’m patient. I watch them in trees and hope they’ll fall out and land next to me. This hasn’t happened yet but it might. When they fly off, they sometimes drop feathers and I eat the feathers. That's how I think the actual pidgin would taste.

PS: Don't think I'm not aware that Nutmeg got asked to be a guest on this blog before me. I heard her boasting about it. And it’s not true what she said about me finding the worm dead. It was alive and I had to wrestle it to the ground (well, it was actually already on the ground, but it did wriggle a bit).

Parsley's human Tim Relf is the author of two novels - you can find out more about his fiction here. 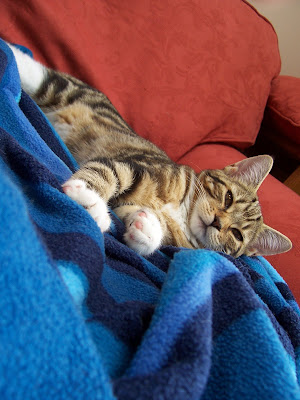 Don't tell Nutmeg but I think I love Parsley more.

Awww Parsley sounds fab! I would like more pics of her tho! She's a cutie :)

Parsley you are very cute!

If you or your sister should ever wish to visit the Devon coast, you would be most welcome!

Darwin
(typed on his behalf by his hooman)

Thank you for your nice comments.
And Darwin, you've made me all embarrassed. Me and Nutmeg are planning a holiday to the west country sometime so we'll be sure to say hello!
Parsley

There will be space in my basket for you if you fancy a "stopover".

Sadly we may have missed the boat as I have heard my hooman is planning on getting my Manberries removed later this week .