Oh, Whistle And There’s A Vague Chance I Might Come To You M’lad: The Diary Of An Amateur Dog Walker (Part Two) 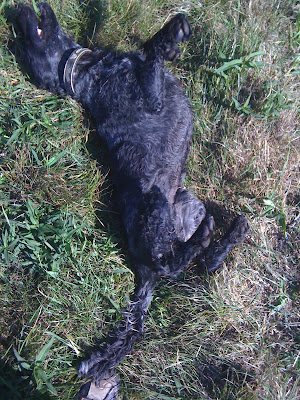 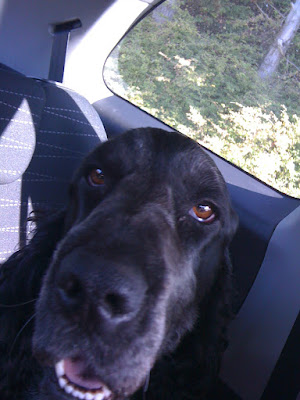 Part two of an extract from my book, Talk To The Tail! Read part one here.

28 February 2009
Henry pissed on his paws again this afternoon. I’m told by
Dee that this is because he has a slightly arthritic hip, and
cannot cock his leg properly. To be frank, I’m still coming to
terms with spending time with an animal who is not entirely
self-sufficient in terms of his own bowel functions, and fur-
ther alarm comes from his habit of taking a dump in the
exact middle of country lanes, usually a matter of seconds
before a four-by-four comes haring around the nearest bend.

Today, a few miles south of Norwich, near the village of Loddon, I was almost mown down by a Range Rover as I
dived for Henry’s excrement, baggy in hand, and rolled skill-
fully over into a roadside ditch. Henry, however, appeared
unmoved by the incident, and raced off to intimidate some
ducks. There’s still a part of me that, as I carry his poo in a
plastic bag, in my coat pocket, is asking myself, ‘You mean
people actually chooseto do this? Every day?’. Sometimes, as
we walk, I’ll forget about the bag, and think about how the
brisk Broadland breeze feels against my skin, or admire a
scarecrow in a nearby field, but my sense of its presence
never fully goes away and, somehow, as I walk further, that
presence seems to expand, until I feel I am walking with not
just one living creature, but two.

24 March 2009
When Henry and I walk locally, there are now various
neighbourhood dogs we have come to recognize. For these,
we like to make-up appropriate nicknames. Well, I say, ‘we’;
I obviously mean ‘I’, but I feel that, if Henry could make up
nicknames for his canine rivals, he would take great pleasure
in doing so. I suppose he’s quite a lippy, boisterous dog, and
I can see that his goading and cheek can get easily on the
nerves of a snotty Dalmatian or a well-heeled wolfhound,
but at least he’s not aloof or imperious in any way, and is as
happy to say hello to a Jack Russell as he is to a greyhound.
This is more than I can say for the Janetdog, so named by
me because of its striking resemblance to my cat Janet. The
Janetdog strutted past us, snout in the air, fluffy tail high,
this afternoon and you could just tell we were no more than
a couple of dirty specks on its radar. This seems pretty rich,
coming from a creature that looks like one of the most
brainless felines in East Anglia.

7 April 2009
I think I am becoming more commanding in my instruc-
tions to Henry. I can almost feel my voice getting
inadvertently deeper when I shout him. Dee, meanwhile,
has taken to calling him my ‘alter doggo’. I’m choosing to
take this as largely a reference to my walking hat, and its
spaniel-style ears. He’s still a little slow in coming to me,
but he does always come, eventually. There are moments,
like the one a couple of hours ago, on the heath a mile
from home, where I was almost passing myself off as a
proper dog owner. The illusion was only shattered when
Henry began having a ‘conversation’ with two Border col-
lies and a red setter. Was it the item of mod clothing my
dad calls ‘YOUR NANCY BOY COAT’ that blew it for
me? Or my shout of ‘Hey! Leave those ever-so-slightly
bigger dogs alone!’? Weighty arguments, no doubt, exist for
both.

2 May 2009
Henry has had an accident. Whilst staying at Hannah’s par-
ents’ house last week, he broke into their kitchen bin,
despite the fact that, as a precaution for precisely such an
eventuality, said rubbish receptacle had been weighted
down with two bricks. During this adventure, Henry man-
aged to eat 2.5kg of old food, tissues, cellophane wrappers,
and some leftover Chinese ribs. This has resulted in what
Hannah has described as ‘a blockage’, leading to an opera-
tion, and stitches. Henry is currently being carried around
the office in one of the blue woven plastic bags customers
pick up near the entrance of IKEA, though Hannah assures
me that this does not stop him from attempting to jump up
and ‘go for the ties’ of executive male members of staff.

19 May 2009
Am I now officially hound-friendly? It would seem so. This
afternoon I walked, Henryless, between the Norfolk villages
of Castle Acre and West Acre. After a mile or two, I passed
by a welcoming-looking pub, with ‘Don’t Spook the Horse:
7.30’ written on a sign outside. I couldn’t work out if this
served as an advertisement for some live music, or just as a
general instruction for the welfare of passers-by. No horse
emerged, but a small brown mongrel – the kind of dog a
person finds himself wanting to call ‘Rascal’ – did, then fol-
lowed me down a lane leading to a ford. I attempted to shoo
him back, but he seemed quite determined, and continued
to walk a few paces ahead of me. There was a presumption
about this on his part, as if this had all been prearranged by
a third party: his dark lord and master, perhaps, who lived in
a cave at the end of the footpath he now led me along.

This point in my seven-mile route involved a number of
stiles, twists, turns and cross-field paths, but Rascal, keeping
pace ahead of me, seemed familiar with it, and needed no
instruction. I passed another couple of ramblers, and, if they
could sense that he was not my dog, they didn’t show it. But
I worried. What if we passed Jim and Mary from the village,
for example, and they wanted to know what the strange
bloke with the beard was doing with the Brian the
Landlord’s dog?

What if Jim was a nosy type, known for his interfering
ways and bad poetry in the Parish newsletter? I could imag-
ine the accusations of theft, the subsequent trial, with
Hannah standing on the witness stand, a betrayed look
across her face, confessing, ‘Well, I do admit I thought it was
a bit strange when he told me he was into borrowing dogs,
but I thought he seemed trustworthy enough. Now, though,
I realise I was naïve.’

Rascal and I must have walked a full mile before he
turned around and scuttled home, in a manner no more
explicable than the one in which he’d joined me. After
that, I only saw two more dogs on the walk, and neither of
them followed me, though one, a Briard, did leap up and put
its muddy paws on my chest. This seemed a more familiar
canine perception of me: not as companion, but as the kind
of sap who would smile, chuckle nervously and not com-
plain if you got a big load of crud all over his Tom Petty and
the Heartbreakers t-shirt. 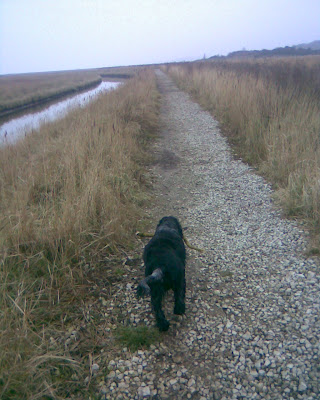 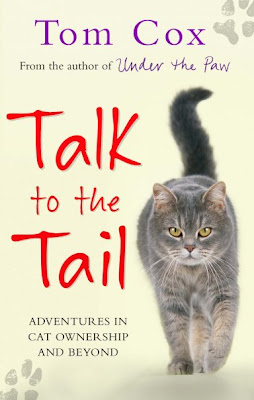 Buy Under The Paw at amazon with 40% off!

Pre-order Talk To The Tail!
Posted by Unknown at 09:09

So THAT'S what he gets up to... no wonder he always trying to get into your house!

(BTW, for anyone reading, since he's been on a health and fitness programme, paw-pissing is a thing of the past;-)) He was just so porky and unfit back then, poor lad!