Guest Cat Of The Month For November: Boris Bratby 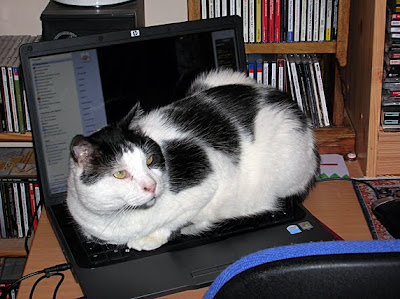 Favourite Habits?
Repeatedly cuffing Annette’s ankles with the flat of my paw. This is the thing with humans – they CAN be trained (it’s a myth to say they’re basically unsociable) but you have to let them know their boundaries. Actually, they prefer it, in the long run.

Rubbing the paintwork on the walls either side of the bedroom door with my paws. I’ve discovered that if you do this, you can make the door open automatically. But it takes perseverance; you may have to keep at it for upwards of an hour.

Springing onto the dinner table from a standing start – especially if there are guests present. They’re sometimes a bit startled: one minute, they’re eating cassoulet; next they’re eye-to-eye across the plate with the head of the household. This is usually a good moment to claim my statutory allocation of their main course, though I find it tastes better once I’ve knocked it about on the floor a bit (doesn’t everything?) Richard and Annette conceal their respect for my skills under a show of apologising – but you can see in their eyes that they’re pretty damn’ impressed. Heck, everyone’s impressed. Why pretend otherwise?

What constitutes a perfect evening for you?
About 6pm I wake up from my 5-hr nap and shout at whichever human is closest until dinner is served. Down in one, out the back door for a quick patrol of the territory, and then back to sleep until the humans prepare their own food. I talk them through the preparation process, ramming their legs at key points to keep them on track. Then it’s served: so straight onto the table and chin down on the rim of Annette’s plate until she remembers to give me my portion.

After dinner, another patrol (and if I’m lucky, a moth or two as a chaser), and then it depends, really. If the humans have performed up to standard, I may join them on the sofa or in front of the fire, maybe even – as a special treat – on their laps. Perhaps a few games of “catch the shoelace” – it’s important to keep their minds stimulated. If not, I’m back off upstairs, leaving them to stew in their own inadequacy in front of the flickering idiot-box.

Defining moment of your life?
It would have to be the occasion when I saw a meddling vet off with a single commanding hiss. Yes young lady – I will permit you to clip my back claws, but don’t push your luck. “Big boy, isn’t he?” Madam, you’d better believe it.

Any Enemies?
The tabby who patrols behind our house in Lichfield. He’s got a good territory, I’ll give him that: it’s a grassy area called Prince Rupert’s Mound, and it’s a Scheduled Ancient Monument. But if he puts a paw on my patch again, his ears are going to be a scheduled ancient monument, savvy? JUST WATCH IT, MATE.

If you could do one thing to make the world a better place for felines, what would it be?
Lose the cars. Four legs good; four wheels bad.

If you could meet a celebrity who would it be and why?
As a Lichfield cat in a house full of writers, my hero is of course Hodge, Dr Samuel Johnson’s legendary cat, mentor and (I believe) co-author. Hodge dined nightly on oysters and the great Doctor himself fetched his dinner from Smithfield Market. I’d be flattered to be remembered by a statue like this one: http://en.wikipedia.org/wiki/File:Hodge_Cat.jpg.

I was deeply honoured when Twitter’s @drsamueljohnson recently told me that “Young Boris, you seem to display the Character of my dear Hodge & Master Eric CARTMAN in equal Measure”

Which one of the cats in Under The Paw would you like to be stuck in a lift with?
I think The Ponce (Monty). Being any human’s first (serious, I mean) cat is a big responsibility, and he really sounds like he knew what he was doing. We could compare notes; plus I, too, offer a personalised fuzzy wake-up service.

Biography
I prefer to draw a veil over my early years. You know the story; I was raised on the streets. No igloo beds and James Wellbeloved Complete Kitten Food in the badlands of South Birmingham: you did what you had to, and only the tough survived. I made mistakes, did a few things I regret. Heck, we all did. But I make no apology. It made me the cat I am today: 100% full grown Tom (well, 98% since that strange episode at the shelter…but let’s not dwell on that).

There were only two ways it could end. I guess I got lucky – though it didn’t seem like it at the time. They caught me, took me in, called me (I can still hardly believe this ) “Splodge”. Once again: “Splodge”. Seriously. Because I’ve got a black “splodge” on my back. Bet they won a Booker for that one.

They stuck a collar on me and gave me to a family. A family…with children. Look, people – children: they shriek, they chase, they put sticky fingers on fur. Have YOU ever tried licking Sunny D off your tail? I don’t care what you told the Cats Protection League: it’s not “anti-social” to try and instil a bit of ten-clawed discipline in the little rats. Whatever: it was back in the slammer for me – South Birmingham CPL Adoption Centre.

Then Richard and Annette rocked up. I’ve seen better material, but I reckoned I could work with it. They wanted a small, well-socialised cat with no health problems. Ha! Like it was up to them. The keeper opened the pen door, and I moved straight in with the full “nice kitty” act – the purring, the lifted tail, the head-rubs. Apparently Richard’s first thought was “Cats That Look Like Hitler”. Annette’s was “I Can Haz Cheezburger”. Both agreed that I looked a lot more like a Boris than a Splodge. Back – as they say – of the basket.

I now live with them in Lichfield, Staffordshire, assisting with their various literary projects. I enjoy lengthy naps, stealing food and controlling the moth population, and divide my time between Richard’s pillow, the back of the sofa, and (particularly when deadlines are looming) the space between Annette’s keyboard and VDU. 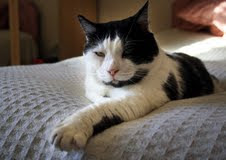