Guest Cat Of The Month For October: Percy 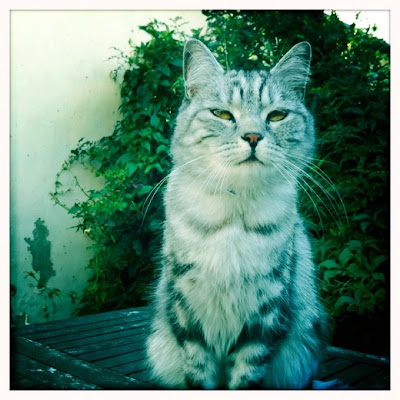 Catchphrase?
“Just popping out for a bit”.

What constitutes a perfect evening for you?
I spend every evening outdoors because I have a very active social life. If I do grace Simon and Laura with my company, I have a very strict routine which I like to stick to. I come in, have a bite to eat, and walk around the living room for five minutes before deciding I want to go out again; then I stand in front of Simon’s speakers threatening to give them a good scratch until Laura gives in and lets me out of the downstairs bathroom window. I do this three or four times until I’m tired and go to sleep on the sofa.

Favourite Food?
Applaws and Royal Canin dry food. Anything cheaper and I’ll just give it a sniff before burying it.

Defining moment of your life?
Discovering the simple pleasures of a twig. One of my earliest memories is Laura playing with me in the garden. She foolishly lost the ball we were playing with so starting dragging a long twig around the grass like a piece of string for me to chase. Well, you thought string was fun? Twigs are AMAZING! Since that day, at every opportunity, I will bring a twig into the house. If it won’t fit through the cat flap then I leave it on the step outside. Once Laura got a bit frightened by the amount of sticks on the step and thought the Blair Witch was living in the garden.

Any Enemies?
Tyson, the neighbour’s cat. I’ve seen him, making a fuss of Laura in the street, doing those attention seeking roly-polys, but believe me, he’s VERY different behind the garden bushes. He sometimes tries to scare me by knocking on the cat flap but I’m not bothered. Laura thinks I’m bothered because I hide behind her, but I’m really not.

If you could do one thing to make the world a better place for felines, what would it be?
I’d have humans appreciate the effort that goes into bringing home a catch. I’m there, hiding in the dark, wind and rain, waiting for the perfect present. When I finally get something, I rush home all excited, letting Laura and Simon know by shouting whilst holding it in my mouth (which isn’t easy), and how do they react? By jumping out of their chairs, shutting me in the bathroom and scrabbling around trying to catch my present, before PUTTING IT OUTSIDE AGAIN.

If you could meet a celebrity who would it be and why?
I’d like to meet Felicity Kendal because she’s sweetly pretty and I want to protect her.

Which one of the cats in Under The Paw would you like to be stuck in a lift with?
Ralph. He’s a good-looking chap and I think he’d make an excellent wingman. He’d have to let me do the talking though, as I hear he has a very girlish voice.

Biography
I’ve been living with Laura and Simon since I was four months old. At that age I had two other names before Percy was chosen. First I was Ossie (after 1960s fashion designer Ossie Clark), but Laura got annoyed with people thinking I was named after the Prince of Darkness Ozzie Osbourne. Then there was Barry, which was Simon’s idea. I didn’t really mind that because it made me sound quite manly but Laura decided she didn’t like it so I became Percy. For a while Laura thought I would be better off living with an enclosed garden because we live next to a busy main road, so she spent ages trying to fix the fence meaning I couldn’t get out. The fence annoyed me so I escaped a few times. Thankfully, Laura decided I was better off roaming free, which I like much better. I don’t like to boast but I’m a pretty confident fellow. Vacuum cleaners don’t bother me, I’m fine going to the vets, and showers are easy. Once I went away for Christmas with Laura and Simon. We stayed in a strange house with Simon’s family but it didn’t faze me, I got to eat lots of nice turkey. 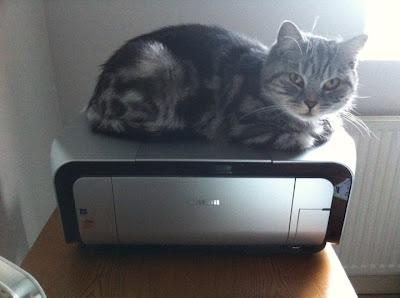 Percy has the most amazing face!

What a great interview -- I'd love to be friends with a cat like that :)