Guest Cat Of The Month For December: Nutmeg 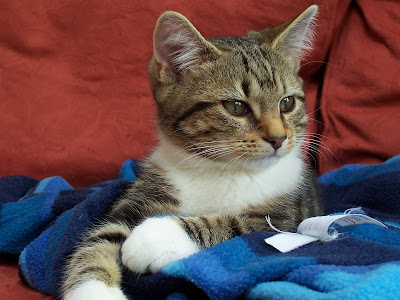 Catchphrase?
Tim says it should be “Behind every great tabby, there's a great owner” but my motto is: "Wrapping presents is better with a cat in the room.”

Favourite habits?
I like climbing in open drawers, chasing - and retrieving - a ball with a bell in it and sitting on the shed. I enjoy stretching out on Tim’s desk under the light (he refers to it as an anglepoise lamp; I know it’s a sunbed). Attacking toes under a duvet is fun, as is rubbing noses with humans and making people who are allergic to cats sneeze.

What constitutes a perfect evening for you?
Sitting on a cushion watching TV. In the adverts, I'd steal food and wind up my sister, Parsley (she doesn't know I'm doing this interview, incidentally, so don't tell her or she'll get jealous).

Favourite food?
I eat two pouches of Felix and a big pile of dry biscuits a day, split equally into two meals. The Felix should be served first on both occasions (it's like a soup course). I’ve also stolen a range of food including: pizza, pasta, duck bhuna, lamb burgers with jalapeno, sausages, yoghurt, lemon tart, blueberry cheesecake and ice cream.
I can't be bothered to hunt much so I don't find a lot of my own food outdoors, but I tried to eat a bee and got stung on the paw and it swelled up like a boxing glove. Parsley eats even less than me outside. All she’s done is bite the head off a worm. And I think that might have been dead when she found it.

Defining moment of your life?
Running away from home last Christmas. I went for three days. They stuck posters up all round the neighbourhood, but I was only in the alleys behind the houses. I came back at 4.30am on Christmas Eve morning. Isabel cried. Tim said something I can't repeat, but I know he was pleased because he cheered and then ate a trifle in his boxer shorts and let me lick the spoon. They joked afterwards (in rather bad taste, I think) about me being a 'Christmas miracle'.

Any enemies?
I did hate the show-off tortoiseshell over the road, but she moved to Wallington. To be honest, I'm scared of nothing. I once went after a squirrel, but it got away. I even squared up to a fox that came into the garden. I might be a small cat, but you should see my tail when it flares up.

If you could do one thing to make the world a better place for felines, what would it be?
Sheds would be provided free for every household, as sitting on them is brilliant. I'm also a passionate campaigner for indoor litter trays, banning all traffic from all roads, and making the whole year fledgling season (see below). In addition, I'm calling for the compulsory distribution of underwear on bedroom floors around the world, as there's nowhere better to sleep on than a pair of pants, socks or a bra.

If you could meet a celebrity who would it be and why?
Cheryl Cole - because I look like her, and if I could get her number and give it to Tim and then he’d owe me a massive favour! I’m actually more famous than Cheryl. I’ve been mentioned on the Under The Paw blog before and my ball-retrieving talent was the subject of one of the Q&A’s in a newspaper’s ‘ask the vet’ column. They didn’t use a photo of me, though, which I’m still considering complaining about.

Which one of the cats in Under The Paw would you like to be stuck in a lift with?
Pablo - because he’s a bit of dish.

Brief biography?
I was born on a farm in Sussex. There were four of us: two boys and two girls. The two boys (Max and Morris) got chosen first so it was just me and Parsley left when Tim came to look at the litter. He took us back with him. I cost £60. Our names were originally Milly and Molly - but they got changed to Nutmeg and Parsley although I don't know if this was via Deed Poll. We are tabbies, but I have the most white.
I've always weighed about 25% less than Parsley. The vet, a nice tall man called Mr Mike, described her as "definitely sizeable". I reckon 'fat' is a better description.
My mum was called Mabel, although no one has the faintest idea who my father was. Rumour is, he was big and ginger. I’ve also heard it said that my Mabel was rather “free with her affections” but I can’t see what’s wrong with that because being affectionate is good. Sometimes, when my fur is rubbed the wrong way you can see flecks of ginger which I like because it reminds me I had a daddy.
I got ill when I was very little and had to have antibiotics and wouldn’t eat. Mr Mike said I needed bland food like fishes and chickeners. They kept me in overnight at the vet's and Mr Mike did something to me with a thermometer that I won't recount here in case kittens are reading. When I went home, Tim cooked me fishes and chickeners. I didn't want to die because, even though I hadn't been outdoors at that stage, I could see this big square wooden thing in the garden with bikes and junk in it and I thought: I'd like to sit on that.
I’m a good hunter when I put my mind to it, but mostly I can’t be bothered. The one time I do hunt is in the spring when there are baby birds. This year, there was a nest with fledgers in it in a tree behind the house. I got up there and pushed three out. I was just pushing the third one out and preparing to climb down and eat them when the neighbours appeared. Tim also came out of the house, looking embarrassed. They suggested he take the fledgers to a local animal rescue centre. He did (reluctantly, I sensed) where they made him give a £5 donation, which he wasn’t happy about. The next day I went back up the tree and pushed the last fledger out and the neighbours called Tim and he had to do the same again. Cost him another £5. Humans never learn.
It also make me realise how confusing life can be, though. I mean, owners say you shouldn't lie, yet Tim claimed he "found the birds in a park after someone’s cat had caught them”.

PS: Thanks for having me.

Nutmeg's human Tim Relf is the author of two novels - you can find out more about his fiction here. 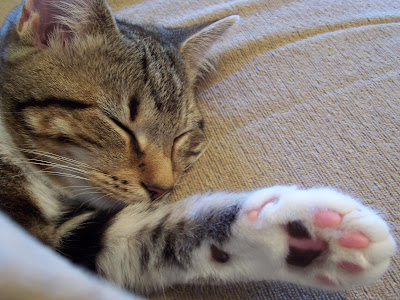 Nutmeg you are just gorgeous!

We all think that Nutmeg and Parsley are great names for cats, that Nutmeg is VERY handsome and resourceful, and that "Fruit Weasel" is a VERY rakish name for a male cat. We'd love to hear the story behind its bestowal sometime, if Nutmeg, er, F.W., has the inclination.

I think I'm in love.

Nutmeg you are adorable.