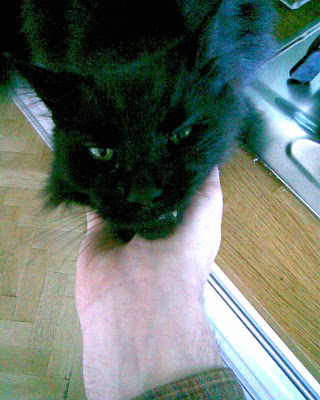 Actually, i've just had a brainwave: maybe next time I'll just put the pill inside an old, empty Hula Hoop packet.
Posted by Unknown at 08:58

Loved the post...both from a comedic and a sympathetic vet tech viewpoint!

Me, too. And Janet sounds like QUITE a character. Please give him a big snorgle from all of us, and yes, your idea sounds like a brilliant one. Hope Janet rediscovers his love for the Great Indoors, too -- no more algae dangers.

My 17 year old calico Molly has hyperthyroidism and been taking meds for six months now; 1/4 pill twice daily (her fur has grown back very nicely). We have found at our vet this miraculous invention called a "pill pocket" which you might want to try. A hollow, soft treat that you insert the pill into then just squish it shut and she gobbles them up...actually meowing at us if we are tardy dispensing her medication! This is a nice change from the transformation to deadly puma that used to happen when we tried to hold her, wrench open her mouth and then stuff the pill down her throat.

Pill pockets are brilliant! It's a cat version of the proverbial spoonful of sugar. We have a cat with a (rather embarrassing) neurological disorder who needs pills twice a day, and we couldn't do it without pill pockets. Thanks to them he takes his meds even when he doesn't fancy his supper.